I searched all over the forum, but only got something similar for the Android app, but since I'm using a Windows Phone, I guess I'll put it here:

The bug/problem is that the App gets stuck on 100% and actually never finishes downloading a playlist when a playlist contains local files stored on a desktop pc.

So while I know that the Spotify App for Windows Phone 8.x (most sadly) currently can't sync local files from a desktop computer it should still be able to sync everything else found on Spotify's own catalog, which it does quite fine, but only until 100% and then it gets stuck in an updating loop and the only way to make it ever finish is to switch "Available offline" to the "off"-setting again. Otherwise the updating loop prevents the app from syncing any other playlists.

Setting the "Available offline" button to "off" thankfully doesn't flush the cache on the Windows Phone, so there's nothing lost when doing so, but it becomes quite inconvenient after some time if one has a lot of playlists and a lot of them containing local files.

Yeah, I uninstalled/reinstalled/rebooted the thing multiple times, the bug seems unsolveable by such approach. And yes, it only does so with playlists containing local files from my desktop pc, not with any that do not contain local files.

Has anyone else experienced this behavior? Is it already known and I just haven't found a topic for that? 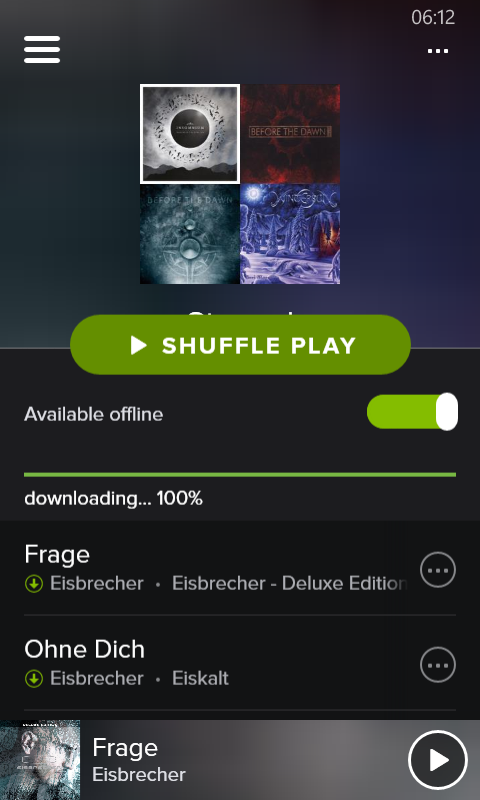 I get the same thing on my main playlist on a Lumia 928.

I have this same problem - Lumia 640 running WP 8.1. I have lots of long playlists with some local files and this bug is causing problems syncing. (Sorry for any thread necromancy, it came top when searching.)

I am having the same issue wtih Lumia 1520 and Windows phone.

Just gets stuck while downloading playlist and cannot get it to finish. Sometimes the downloas complets but only with a small playlist 10 songs or less for example

i know necro but still same issue with big play list... lumia 520 (must be a lumia specific issue)

although i can still play them offline it still says  100% infinitely whenever i connect my phone - visual bug only maybe? (windows 10)