Mobile has playlist/library sorting options, while pc doesnt. The ONLY sorting option pc users are used to, the custom order, is not available on mobile anymore.

Sorting order 'custom' for library/playlists to be available on mobile.

Initial default sorting order on mobile: custom (as on desktop).

After changing the sorting order: maintain that choice.

I enjoy organizing my playlists using the desktop spotify app. I still add custom separators between the lists (instead of using folders) using a name like "----------". However, this organization does not carry across to the mobile app.

Contrary to the desktop app, the mobile app offers sorting of playlists, which is weird enough. However, the only order desktop users are used to (the custom order), is not available as a sorting option. Again, this is weird as Spotify does allow you to sort playlists in (mostly*) the same ways as you can on desktop.

*ps: 'duration' is missing as a playlist sorting option on mobile (it is available on desktop). Though I'm not a fan of it, it's strange that it's not available on both platforms.

SPOTIFY you need to take this seriously. The community forums is LOADED with complaints about this but you closed every single one of the suggestions - add them all up and you have a high number of people who expect their library on the phone to be in the same order as the library on their desktop.

it is also a SAFETY ISSUE. Some of us take the time to organize libraries and playlists in a specific order and cannot find them while getting ready for a drive. What should be a routine scroll and select turns into a frustrating round of scroll, seek, swear, search. Do you think everyone has the time and patience to pull over in order to safely find a playlist or album because it's not where it's supposed to be?  Make driving and spotifying safer - keep the custom library order.

I mean, seriously - why did you add the feature to organize the library into folders at all when you're not even going to keep them in the right place when you switch from desktop to phone? How short-sighted and sadistic is that?

@alex funny how feedback here is always marked as a ‘new idea’. It’s not a new idea, it’s feedback on the mess the development teams keep creating for end users.

Why are all your A/B tests not open for general feedback? That could help both the users and the teams more.

I've just about had enough of Spotify, and I'm not paying for their service again until they bring back this really simple but essential function. I've waited for months for a turnaround, but am sceptical at this point they'll do anything. I'm done.

This isn't even a new idea, the app used to have 'custom order' functionality for playlists, and some total jobsworth has taken it away. For what reason, exactly? It's ridiculous.

I have several dozen playlists, and I've kept them in a tidy order for years. This used to be tricky, as you couldn't even alter the track order within a playlist via the Android app until relatively recently. When at last everything seemed in order, they've gone and pulled this stupid stunt with the playlists themselves. I don't want my playlists appearing in a 'recently played' order; that's useless to me. The fact it causes all of my playlists to move around constantly achieves nothing, and makes finding what I'm looking for take far longer. The fact this functionality now differs from the desktop app as well, creating different user experiences, is also completely stupid.

I don't know what sort of incompetent people thought this was a good idea. I've disliked changes in the past, but this one is by far the worst, and has made Spotify a complete burden to use. I'll be taking my money to a superior alternative - one that lets me do the most basic thing, which is access music in the order that I want. If Spotify can't even offer that, they don't deserve my custom.

I agree with you guys. Very frustrating. Because they used to have the feature “custom order.” It was the same on mobile as it is on desktop. I have over 350 playlists, meticulously organized on my desktop PC. It’s extremely frustrating when trying to locate one playlist whose name I’ve forgotten, but I know its location within all of my organized sections and categories on desktop. But on Mobile = pure chaos. Please, please, please restore the “Custom Order” option on mobile.

We moved this thread to the relevant help board where it fits better.

On your phone you can sort your playlists by 'Custom order' after filtering Playlists at the top and then tapping Recently played and select the order you prefer:

You can also pin up to 4 playlists to the top of Your Library by swiping right or long pressing and choosing Pin playlist from the menu.

More info on the recent changes to Your Library as well as some useful tips and tricks can be found here.

Hope this helps. In case you're having trouble with the sorting order, it'd be great if you can send over some screenshots so we can see how things look like on your end.

XeniaModerator
Help others find this answer and click "Accept as Solution".
If you appreciate my answer, maybe give me a Like.
Are you new to the Community? Take a moment to introduce yourself!
Reply
0 Likes

The issue here is that the custom order now only applies to playlists if they're not organised into folders. I can go through the above process - which is more steps than it ever used to be as well - and it's redundant because as soon as you enter a folder, the custom order is gone, and the playlists themselves are always arranged in a 'recently played' order.

For instance, I have a folder of playlists here called 'Years'. It's my most-used folder. Inside it I have collections of new music that I've discovered each year. These are plainly designed to be in numerical order. But now, these playlists appear in a 'recently played' order that is, by design of 'recently played', constantly shifts. The 'custom order' won't apply to them from inside the folders I've arranged them into for ease of access, and now they're all permanently out of order and constantly shifting order as well. Instead of the organised index of music it used to be, it's now an untidy mess and much more awkward to use.

Organising playlists always used to be restrictive in one way or another via mobile app. You used to not be able to rearrange songs in a playlist via mobile. Now you can. You used to not be able to edit album art of a playlist via mobile, now you can. These were great changes that improved usability, and for me Spotify's UI reached its optimum standard - at least for a brief time, until this change to how custom order works, and now it's undone all the good changes with one new one that ironically makes it less usable than it ever was before. It's so frustrating as it's such a simple function that used to exist, and has now simply been removed. Not one of Spotify's rival music streaming services lacks this basic functionality, and so sadly I'm going to find myself drawn to them - which is ridiculous, because it's the smallest thing that feels like it's an oversight and yet Spotify keeps insisting that this is actually a deliberate change. But why on earth would anyone think their UI is improved by removing a customisation option from users that served the basic function of keeping content organised, and which ensured the experience of the service was as simple to use and as similar across different kinds of device as possible?

This problem has persisted now for several months, and unlike other minor issues of the past, this isn't one I've found myself able to adjust to. In the absence of any sort of actual workaround to it, I've found myself setting up accounts and playlists on other services, and getting ready to migrate over to one of them. Which again, seems ridiculous over something so minor, and which I feel could be easily resolved by restoring custom order to playlists, even when they're arranged into folders. 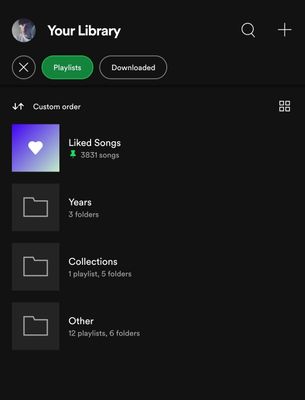 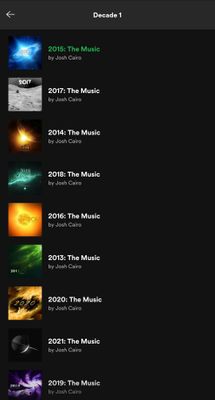