Playlist on shuffle stuck in pattern

Playlist on shuffle stuck in pattern

I use the desktop version and have a playlist of about 200 songs, which is about 14 hours worth of music. I do play this list for extended periods of time, always on shuffle and repeat all.

Recently, I have started noticing the same songs playing multiple times per day, sometimes the same song repeating in the span of an hour. Other songs don't seem to be played at all. Also, many songs are played in the same order over and over again, I noticed 3 particular songs that were always played one after the other. Double and triple checked I was on shuffle mode, also the songs were not adjacent in the original playlist.

I did test this a bit just now, by spamming the next song button. And indeed, it did start repeating songs way too early, after maybe about 40 songs, instead of the expected 200. I kept going until it played the same songs about 5 times, and every time the order of certain songs would be the same.

This is very irritating to me. The shuffle algorithm seems to be unreliable, it clearly does not play through all the songs before starting over, and it clearly doesn't randomize the song order well enough.

Thanks for reaching out to the Community!
We're aware of this behaviour of Shuffle where it will not shuffle the entire playlist but it shouldn't be retaining the order of shuffled songs all the time.
Could you try removing your cached data to see if that would make any difference?
You may do so by following the article here.

Aside from this, we also have two Ideas that may be of interest to you:

If they are, you may leave a Like to show your support 🙂
We'll be on the lookout for your response.

To clarify: It does not maintain the order of all 40 songs looped. It does however maintain the order for parts of it. Like the mentioned 3 songs in a row, that would always be played in the same order would be followed up by another seemingly random song, which was different for each loop.

I cleared the cache, and also moved the offline sound storage to a different foldern then restarted the client. Tried the playlist, tested in the same manner as before by pressing next song a bunch of times. Same issue, same songs as before were played and started looping multiple times, while other songs were never played at all. Also the 3 particular songs I noticed before were in the exact same order again, although preceded and followed by anothe random track.

Would it be possible to test this on a different device (preferably a different platform like Android or iOS)? Also, please send us links to the 3 songs you've noticed are getting repeated.

MihailYModerator
Help others find this answer and click "Accept as Solution".
If you appreciate an answer, maybe give it a Like.
Are you new to the Community? Take a moment to introduce yourself!
Reply
0 Likes

Also, please send us links to the 3 songs you've noticed are getting repeated.

There were more songs that kept ther order. I will include a couple of examples:

The 3 songs I noticed the most:
Spiritbox - Sunkiller -> Spiritbox - Rotoscope -> Borders - Fade to Black

Some other pairings I noticed:

Rammstein - Morgenstern -> Stellaris - Echoes of the Past

Would it be possible to test this on a different device (preferably a different platform like Android or iOS)?

On Android, I do not seem to have this issue whatsoever.

I noticed on desktop, I have a couple local files mixed into the list. One of these local files seems to cause issues from time to time and randomly stop the playback. No idea if this is related in any way, but I will attach the file.

€ I am not allowed to attach mp3 files.

Also, I tried to force a change in the pattern by manually playing one of the songs not played currently, and that does seem to work for now. The shuffle now seems to properly pick up many more songs now, and I was not able to recognize any patterns so far.

Thanks for your reply and for all the info shared.

We appreciate the time you took to report this to us. Since this is a behavior that's happening on a specific device, we can't provide a specific timeline for this inconvenience to be fixed. Nevertheless, we suggest keeping the app up to date.

Always remember, as @Vasil mentioned above, that other users had similar requests, so they posted those ideas about it. Feel free to add your vote in the thumbs up icon and subscribe to it in the three-dot menu; that way you can stay up-to-date with any relevant news about this.

Hope this clears things up. If you have any questions or need anything else, the Community is here for you.

AlejaRModerator
Help others find this answer and click "Accept as Solution".
If you appreciate an answer, maybe give it a Like.
Reply
0 Likes

After noticing we're stuck in a loop again, I discovered that you can actually look at the entire queue and fast forward it to check, if it is an actual loop. Turns out, currently it is a 100% loop, song by song. The queue is 80 songs. The loop is exactly 84 songs. The playlist has 215 songs.

I can memorize the current song, whatever it is. Then I skip to the last song in the queue, number 80, which will become the new number 1. Then the memorized song will be song number 5 in the queue. Doesn't matter which song, works every time.

Also tried skipping songs 1 by 1 with the "next song" button. Same thing as directly skipping by clicking the queue. Playlist is still on full repeat and shuffle. All songs in the loop always replay in the exact same order, and only exactly 84 out of 215 songs for the playlist are played at all times. 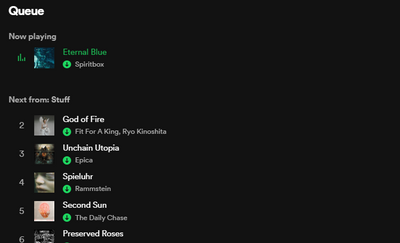 Notice other songs and their order. Now we fast forward to end of queue: 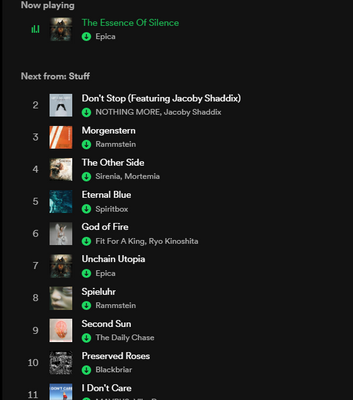 Eternal Blue, number 5 in the queue, followed by all the same songs as before, in exactly the same order.