The app keeps freezing when I use the watch on a run. I start Spotify, music starts playing no problems for a few minutes.

I open the iOS activity app to track my pace and distance, music still playing on Spotify...

randomly, the Spotify app stops playing music and the app freezes, meaning I touch play and nothing happens and watch doesn’t respond.

I take the watch off, put it back on and after the watch does it’s thing I can then restart the music and start running again.

what’s wrong? Why does this happen?

I purchased the cellular Apple Watch version to be able to stream music from my watch while on runs and use streaming apps.

I haven’t left the country or state. The watch and iPhone were paired in the same state I run in. I say this because I see some comments about signing out of the App Store to reestablish your location....

why does Spotify app keep freezing when using on the Apple Watch SE?

This happens to me all the time, and it's maddening.  I may have a solution, it has worked for me six times in a row.  My theory is that if spotify start streaming via wifi or bluetooth, it sometimes can't make the jump to cell, so the solution is to force the app to use cell to start.  Here's what I do.

1) Turn off wifi on watch.  Don't worry, the watch will turn wifi back on automatically sometime in the future.

2) Disconnect watch from iphone bluetooth.  I turn bluetooth off on my phone to do this, but you can also just get far enough away from your phone.

3) Activate cell network.   When you flick up on the watch setting, you want to see the cell symbol green (not white).   I fire up the appstore on my watch, browse a couple pages and this seems to do the trick.  Make sure your cell symbol is green.

4) Open spotify on your watch,  the watch should be the only device, since it can't your wifi or bluetooth.  Select playlist.  Go for your run!

This happens to me all the time. It's maddening and defeats the singular purpose that I bought the watch for in the first place. I just want to be able to run or workout without having to carry my phone. 9 times out of 10 whenever I try to launch spotify and choose a playlist I get a 'something went wrong' message, which is not at all helpful. if I do manage to get past that and get to a song it tends to want to play on an echo or bose device back home instead of on the watch on my wrist. Oftentimes the watch that I'm interacting with doesn't even show up as on option to listen on.

I have a 5 series with cellular running the latest OS and version of spotify.

Thanks for your posts.

Could you let us know if streaming on the watch works fine if you have the phone on you and are not streaming only from the watch using cellular?

Also, the next time you get the error message "Something Went Wrong" try to turn Bluetooth on the watch off and back on again.

As i already told you, everything works fine as long as you have your phone nearby and connected, which is pretty stupid.

I will try turning bluetooth off and on again.

I have reinstalled everything (e.g., reset watch to factory, reinstalled spotify, etc.) and that didn't help. It works fine if I have the phone on me, but again, that defeats the whole point of the watch.

Thanks for the reply and the info.

We've passed this info on to the right team at Spotify, who'll look into it.

For now, we recommend keeping your app up to date and allowing updates, as this might get resolved in an upcoming on.

Hope this helps. Don't hesitate to reach out again if you have questions. 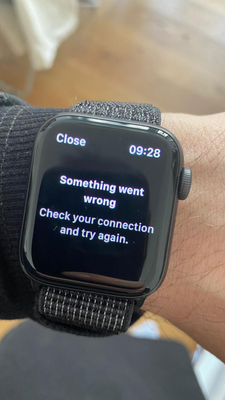 We recommend that you make sure that you always run the latest OS version and always keep your app up to date for any updates regarding this.

You can also check out our newsroom from time to time for more updates.

We recommend that you firs fully unpair your watch from the headphones and smartphone. Afterwards perform a clean reinstall of the Spotify app on your iPhone and pair the devices them again. This way the connection between them gets reestablished from the ground up and issues like the ones you're describing tend to get resolved. It's also a good idea to check for any possible firmware updates for all devices in your setup. That way you can make use of all released fixes and improvements.

You can also find some more useful info on how to use Spotify with your Apple Watch here.

Keep us posted! We'll be happy to lend a hand if you need more help.

Thank you for the reply. Unfortunately, that too, did not work.

Such a bummer. It keeps happening. Start my run, with my Bose Headohones and Apple Watch, 15-20 min later Spotify stops playing, watch freezes up “something went wrong” and I have to stop, take the watch off out it back on and it starts working again.

this is lame because it interrupts my run.

Thank you again for the reply, but this unpairing and repair didn’t work.

Both my iPhone and watch are up to date.

Can you let us know if this is happening if you try pairing another Bluetooth device to your watch and whether it freezes like that when you listen to podcasts as well?

Also, it'd be helpful if you can share your Spotify version with us.

The Apple Watch software version is also up to date and that is 7.3. It is the cellular version. So I should be able to use any apps that require cellular service with my watch only. There are no dead zones on my route. Prior to having my watch, I used my phone on my runs without interruption.

The Bluetooth headphones I use are Bose Soundsport Free.

I only play music when I run, I pick a playlist I like and hit play then start my run.

I have not used another pair of Bluetooth headphones. I don’t have another set.

I hope this helps you help me figuring this issue out.

If you could borrow a friend or family members Bluetooth device and give it a try, that would help the troubleshooting a lot. If it doesn't work there as well, we can exclude the headphones as the root cause of the problem.

If that's not an option, could you let us know if the issue comes up when using a different internet network? Does it happen over wifi or only when using mobile data on your run?

Keep us posted. We'll keep an eye out for your reply.

Kelvv1
Visitor
It works perfectly fine on wifi, but for cellular it keeps showing "something went wrong" when you try connecting your earphone on apple watch SE. The cellular works on other apps such as sending messages (Messenger) on apple watch when you are away from your phone. It happens after I updated my phone and apple watch SE to the latest version.
Note: I did try the steps of reinstall the apps but it didn't work.
Reply
1 Like

Thanks for reaching out about this and letting us know what you've tried.

Would you mind sending over a video or some pictures where we can take a better look at what you're seeing from your end?

You can attach them using the Insert Photos or Insert Video options in the post editor.

watch is connected and all other apps work as usual with mobile data.

only Spotify doesn’t work. I tried all things you’re talking about. Didn’t work out.

Also I tested and found out, that the Spotify app runs fine on the watch while you’re phone is connected. If you turn your phone to airplane the watch app stops.

-> the app should run on a cellular watch without a nearby phone.

what are the steps do get that done?

You can try following these steps to set up your watch so that you can listen to music without the phone.

1. Power your Apple Watch on and then launch Spotify on your watch if you've it installed.
2. Tap Your Library and browse a playlist or an album you want to listen to on your watch.
3. Press the Device menu at the bottom right corner of the music player screen.
4. If your watch is streaming feature supported, you'll see your Apple Watch at the top of the list (there is a 'Beta' tag in front of the watch name), then select it.

Let us know if you have any questions.

that’s sadly not how to solve that problem.

Sorry for the misunderstanding.

Could you share with us a screenshot of what you're seeing? We'll look into this further.

Keep us in the loop! If you have questions, you know where to find us. 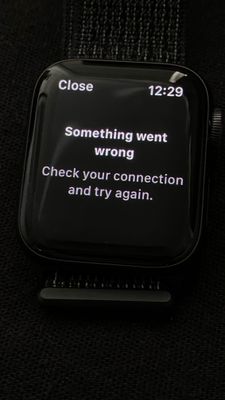