So I have what I believe is a super weird issue.  I noticed a few months ago that my Spotify account stopped scrobbling to last.fm and up until about 7 hours ago,  I thought this was an issue with last.fm instead of Spotify, however I had a thought and came across the Spotify Currently Playing Track API,  tested it out and it turns out my account isn't posting any data to the API for currently played music.

It gets weirder though,  If I'm connected to WiFi on my phone it works perfectly fine, but even though I don't have any mobile data restrictions what so ever (Even reset my phone to factory settings), it just doesn't post any data to the API, but I can still listen to music perfectly fine, non-cached, so that gets rid of the mobile data being an issue. I have confirmed this as if I hotspot my MaBook from my iPhone, it scrobbles to last.fm perfectly fine.

As I was testing this today,  I tried listening to a song on my MacBook and this does pass data to the api, however, what I also found is that because of my account on my phone not sending my data to the currently playing api, I can actually listen to music on two devices at once, so I can be listening to some thing on my iPhone but I can also have completely different music being played on my MacBook, there's no link what so ever that my account on my iPhone is even being used, unless I'm on WiFi.

TLDR; I have what appears to be three issues

- Music not scrobbling to last.fm (believe this is due to the next point)

- Music not being posted to the Spotify API

- Music is playable on two devices at once under the same account, because data isn't being posted to the Spotify API.

Has anyone ever seen this?  I'm slowly using Spotify less and been using Apple Music a lot more recently purely because I'm losing out on Scrobbles to last.fm, which sounds petty, but I've been tracking my music since 2005 and this weird bug is preventing that from happening...

Just to add - I have a Three UK WiFi hotspot for working from home due to COVID, and this actually lets me scrobble to last.fm also, it also 'links' my account up so I can't listen to different music on the same account on different devices.

Thank you for your post here in the Community. We're happy to help.

In this case we suggest that you that you perform a clean reinstall of the app. This will make sure there's no old cache files causing this.

Can you make sure that your mobile data is enabled in the Spotify app? You can check that by doing the following: settings > Spotify > Mobile Data.

Let us know how everything goes so that we can continue to assist you if you need us to.

JeremyModerator
Help others find this answer and click "Accept as Solution".
If you appreciate my answer, maybe give me a Like.
Live, love, laugh and listen to music 🙂
Reply
2 Likes

Sorry should've mentioned that -- I've tried a clean reinstall as well as a full factory reset of my phone.  I have mobile data enabled in Spotify also.

I have actually found though that it appears to be an issue with 4G under 'Three UK', whether it's an issue on the Three side or the Spotify side I'm unsure.  If my phone is on 4G I can use Spotify fine but it doesn't post any data to the now playing API, so I can play music on two devices at once like I'm using different accounts.

If I put my phone onto 3G instead of 4G, it works as expected and when I go into Spotify on my macbook it says I'm playing music on another device and updates the Now Playing API, but when on 4G it doesn't.

So there's a few issues here, again unsure who is at 'fault' here Spotify or Three UK

- When a Three UK user is on 4G, multiple people can use the same premium account

- When a Three UK user is on 4G, no music updates to the now playing API

- When a Three UK user is on 3G, music is updated to the now playing API

- When a Three UK user is on 3G, multiple people cannot use the same account

So my I at least have a work around for my issue, but it would be nice to be able to listen to music with my phone on 4G and it scrobble to last.fm than have to keep changing to 3G!

That and there's now what I would see as a 'glitch' in the system that allows one premium account to be used by two or more people at the same time if using 4G on Three UK.  I've confirmed this by signing into my account on the following items:

And I can listen to different music on all three devices at the same time, under the same account.

I've attached a picture that might explain this better 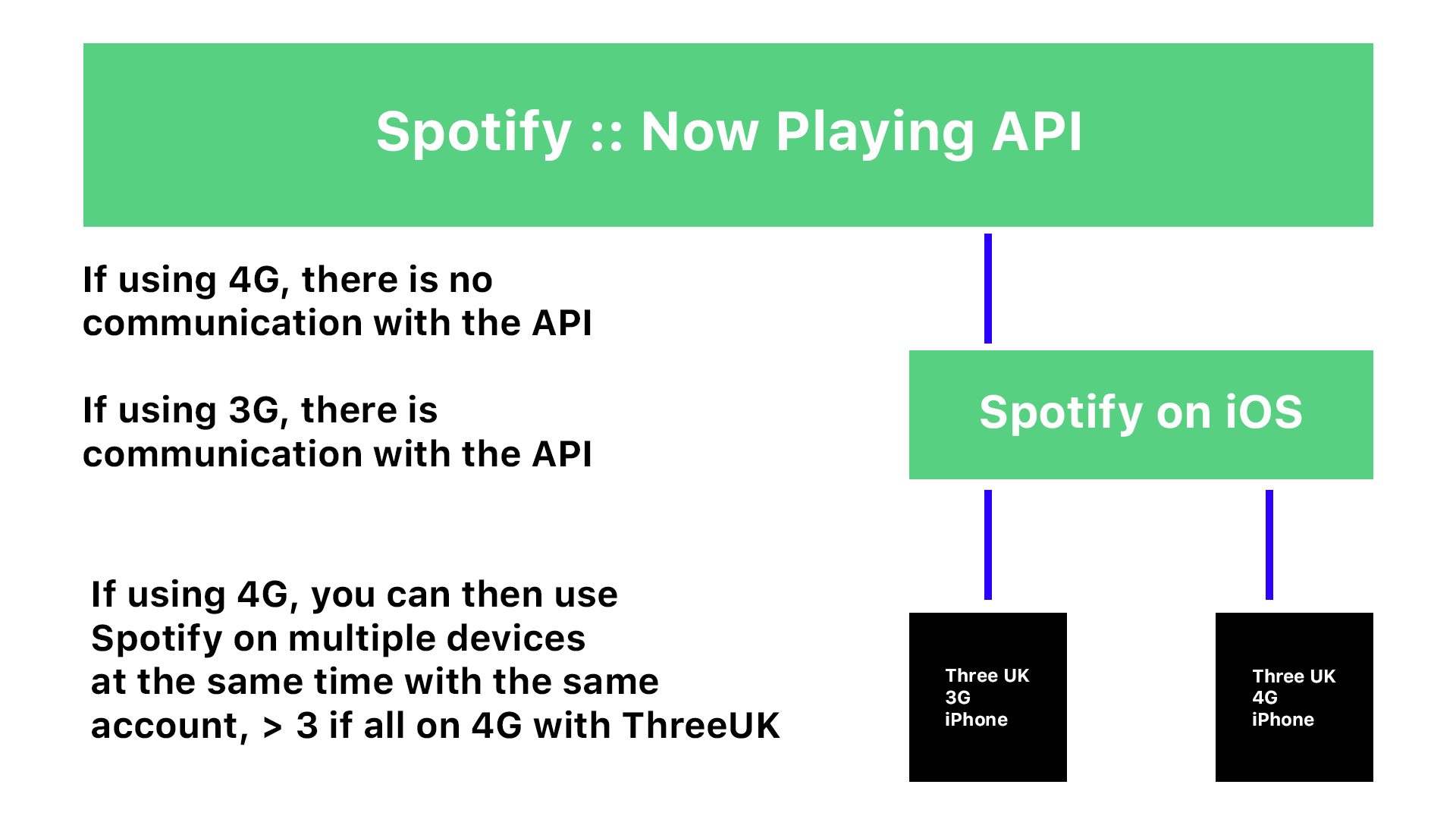 Thanks for keeping in touch and for the extra info.

If the issue persists after this, we suggest to reach out to your mobile carrier for further info about any limitations that there might be.

We hope this helps. If you have any questions, we'll be right here.