galaxy s9 plus with the latest Android software may 2018 + brand new M140i 2018 latest idrive. spotify doesn't work, i can only see the spotify icon in the idrive screen, if i click on it. nothing happens , its a shame .i hope bmw and spotify are listening to this and hopefully they will fix it.

😔 its very annoying. i tried everything.

Picked an M2 up myself yesterday and same issue on a galaxy S8+.

This is an odd one.

When I had the connected drive app - the separate one, I could add Twitter and spotify to my apps on my 2014 435D.

I never used to plug the phone into the car for Spotify, I always just used Bluetooth. About 4-5 months ago, I lost the ability to switch songs from the control on my steering wheel. Can skip forward and replay through idrive button on centre console which is a pain.

However I have noticed the Spotify app has disappeared from my in car system and I can't seem to add it either.

Now it may be coincidence or directly connected to one another.

However I did expect better from BMW and spotify. How hard can it be to solve this?! 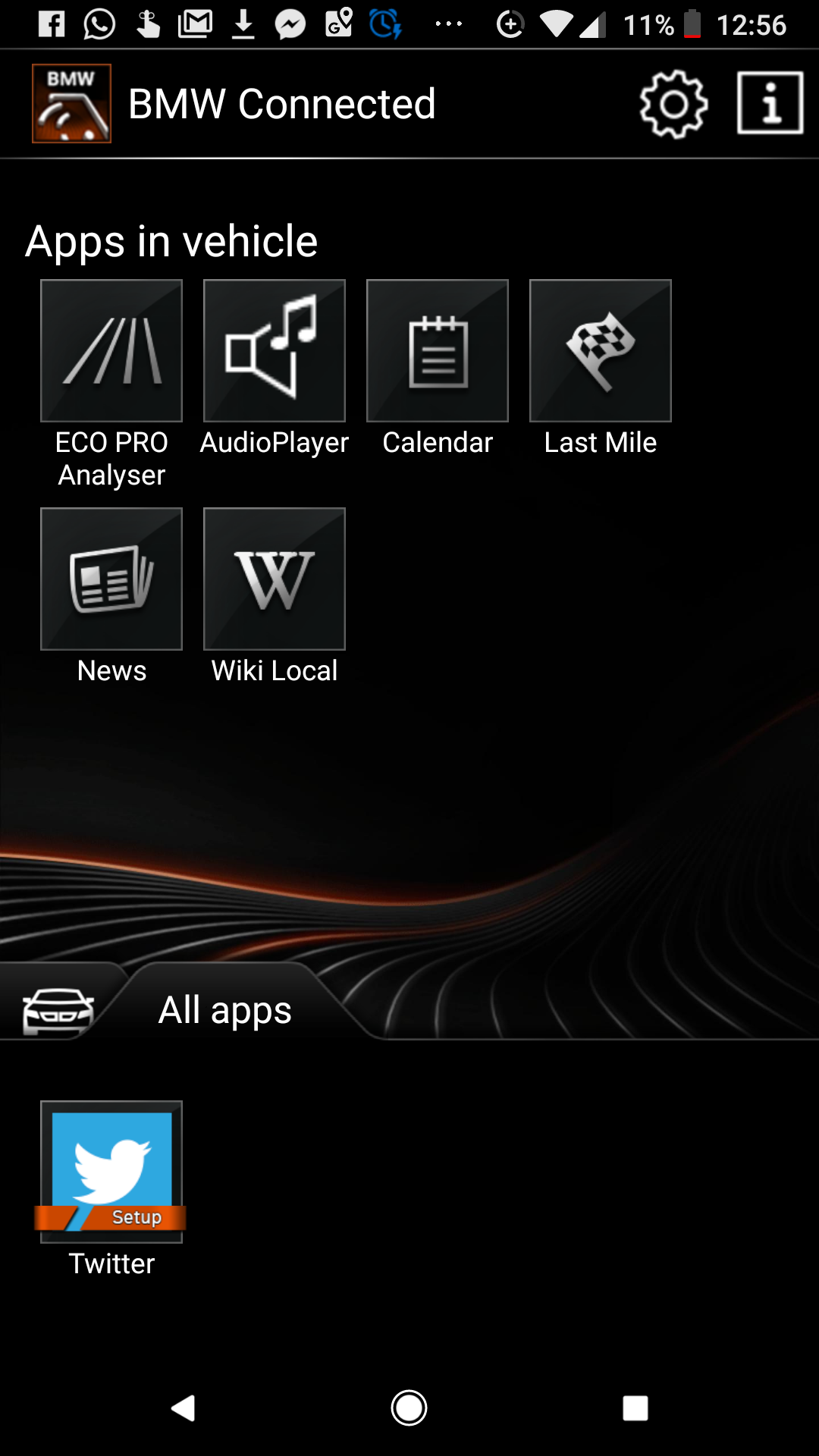 I cannot get spotify app to load on my 2016 3 series, which has the media plus pack. Do I need a lot of hard drive space on the Idrive system? Really is frustrating and support is non existant. Yelp loads though!

Same issue. BMW i3 with Oneplus 5T. Spotify does show nor the ability to control from wheel

The problem Spotify problem has nothing to do with iDrive hard drive space.

BMW suppport is useless. They informed me that Spotify / Android was not supported and I should simply connect my Galaxy S7 phone to the car via USB and accept limited functionality. This is nonsense of course and directly contradicts what BMW is officiallly telling us on their Connected App.

Spotify were sympathetic but no solution was put forward. Here is what they told me a couple of weeks ago :

We close reviewed the issue and we can confirm that the Spotify app itself is not causing any problems in this situation. This is based on the devices you're able to use for listening. We understand how frustrating this can be and we didn't mean to hassle you through out the process. But the best suggestion we have right now, is using wired connectivity to your BMW sound system.

This situation has been clearly shown as a limitation from your android phone to the BMW sound system itself. But since you're able to have various connection to multiple devices you have (e.g. Bluetooth speakers and Apple TV) we can confirm that this is something that is not being caused by our app.

We'd love to have this issue fixed as quickly as possible. Unfortunately, this connection issue is really needed to be raised to BMW again since this is something that's out of our scope of support. You can ask if they can update or downgrade the version of your sound system to match the Bluetooth connectivity of your phone. If it's possible, you can also ask for custom firmware too.

Today BMW called me to apologise and advise me that “ Germany was aware of the problem and was working on it”. Pretty pathetic given how long this fiasco has been going on.

In the end I have reverted to the BMW Online Entertainment  package, using the streaming services of a well French competitor to Spotify, which was discounted 20% by BMW thereby making the cost comparable to the normal monthly premium subscription. Works perfectly throughout Europe - as should Spotify. I wasted the best part of two months trying to resolve the Spotify problem and gave up in the end.

Clearly, this is not a priority for BMW but will be a deal breaker for many, including me when they come to buy their next car. This was the message I gave to BMW to take back to Münich when I spoke with them today.

Same for me on my new 2018 3-series F31. Yesterday it actually worked to start the spotify app (in iDrive) for the first time. I have an S9+.

I'll try to remove the battery savings for BMW connected app and spotify app as someone mentioned and see if that help.

Anyway, I also saw the issue with random song when chosing song from the heads-up display. From the main iDrive display it seemed to work.

I have a 225XE with a asus zenfone, and it's the same thing it's a pain in the **bleep** to get it to work, then it only works for about 10 minutes, and you have to connect everything all over again.

I've already tried every single option, all software is upgraded, still no luck.

it at least works with bluetooth, but no playlists, no menu and no album art.