My daughter woke up yesterdaymorning and the Spotify app didn´t work. It was just a black screen. We have tried to do all the recommendations that we can find here but nothing works. When trying to re install we only get the spotify logo on a black screen and then redirect us to the google play. The phone is a galaxy S5 and everuthing else works fine and here spotify account works fine on other phones.

We tried everything, hard reset, SD card clean etc.... What shall we do??

Apparently my last message did not get through but by manually updating twice, Spotify now works for me on Android 5 on Galaxy S5. I think that with the latest Android 5 update it disabled the automatic updates, causing me to think I had the latest version but apparently didn't. There is still an update waiting for me but I'm keeping it as it is right now since this works 100%

Screenshot of the info screen from settings with my version: 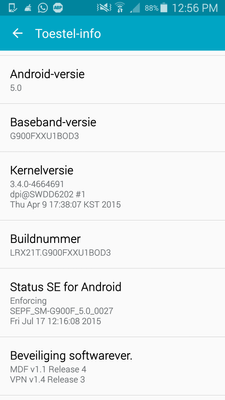 Manually update Android as instructed above worked for me! Phone is way faster too now btw, I think personally that the Android 5 version I had before was some rushed version with lots of bugs

Hello @Kenthlind, Welcome to the community! 🙂

If this doesn't work we'll take it from their 🙂

I hope this helped! 🙂

OK, done that (like several times before) but same....just a black screen

Cyudowsky
Gig Goer
I have the same problem since this morning work my Samsung s5 phone. Done the same things and still not working. Any advice or idea will be appreciated. Thanks!
Reply
0 Likes

Wow this is weird guys!

I scrolled through the help section, saw this thread and wanted to say that a reinstallation would do it...So actually the same @jean3601 already said.

I hope this get solved quickly with a upcoming update or that it's just a temporar bug!

Cyudowsky
Gig Goer
I have already reinstalled it 3 times, logged out from all the devices twice, And still nothing
Reply
0 Likes

@Cyudowsky and @Kenthlind go in the Android Settings to the App Section and delete the App Data without reinstall the App.

Cyudowsky
Gig Goer
Done that too. Not working for me :'(
Reply
0 Likes

Hey guys, i am going to escalate this so Spotify Staff can have a look at this 🙂

Just as a test, could you try removing your SD card, reinstall Spotify and try launching the app again?

Let me know how you get on.
Reply
0 Likes

Cyudowsky
Gig Goer
Not working for me either. 😞
Reply
0 Likes

Cyudowsky
Gig Goer
I don't know if it helps, but the application is creating an image, that I haven't seen before and now I can see in my images.
Reply
0 Likes

when You uninstall the app can You check there is no "Android/data/com.spotify.music" folder on internal storage and SD card as well?

You can use the "Archive" application which is stock on Samsung phones.

Ok, so last try is without the SD card, like @Pete said before.

Cyudowsky
Gig Goer
I don't have my SD card in my phone. I removed it and never put it back
Reply
0 Likes

leonardo2204
Newbie
I'm having this very same problem. I just updated my Spotify on my S5 and I can't get it running again.
I tried reinstalling, formating my SD but it doesnt't want to work.
This is probably some bug on the S5 devices!
Reply
0 Likes

Cyudowsky
Gig Goer
Great. Who can solve it then?
Reply
0 Likes