More and more recently, it seems that whenever I attempt to access a saved songs playlist (such as my saved Talking Heads songs) on my phone, it'll do the loading screen for a hot second and then just stay on black. Clean reinstall and removing offline devices didn't work, reloading the app doesn't work, reaccessing the playlist doesn't work, and it's very frustrating. I would like some insight into how to fix this, as I have gone through all the hoops and even checked my internal storage and filed on my device multiple times for the clean reinstall fix and it has not worked.

By the way, I'm accessing the artist from my "Artists" tab, going to "Talking Heads" [subheader: Artist], and this is where the problem is occuring. With playlists like "90's Alternative Rock" it sometimes doesn't load properly the first time but after exiting the playlist and reentering it, it loads fine.

It only seems to be with artists that I have a larger amount of songs saved to. For example, my saved songs for Talking Heads is at 284 (the majority of their discography), The Alan Parsons Project: 177, Tony Bennett: 155, David Bowie: 733, David Byrne: 186, Led Zeppelin: 128, and Pink Floyd, 150. They all have the same issue with not loading on mobile. In contrast, ones that have a large amount of songs saved (but still under 150) that do load are as follows: Supertramp: 92, Red Hot Chili Peppers: 79, Paul Simon: 81, Radiohead: 65, Primus: 80, King Gizzard & The Lizard Wizard: 82, and most strikingly Jinsang: 102. Is there some random cap at 150 saved songs for an artist at which it doesn't load? Because I can access the "Gypsy jazz" playlist by David Michielsen that has 491 songs on it, or my "ANOTHER ROAD TRIP PLAYLIST" playlist with 263 songs just fine, they load up instantly!

It's rather frustrating that there's not a way to just access a playlist composed of the artist's work without having to personally save them. It seems like it would be more sensical to just be able to save the artist's song collection as a playlist on the server-side of Spotify, and then allow the client to access that playlist if they so choose so. After all, all the albums and singles are grouped under the artist in search functions and other categorization, why not just compile all the songs together already? Because shuffle play doesn't allow me to go to a specific song (such as starting off with a song I want then just playing anything else by that specific artist) unless I open up the queue and just happen to find it somewhere within, and Artist Radio has all kinds of other artists aside from that one artist, and not all the songs by the artist that the radio is for.

Re: Mobile Not Loading Saved Artist Playlist (After Clean Reinstall and Removal of Offline Devices)

I intended this to be an update edit to my original post, but apparently this entire message was simply not acceptable by the guidelines (which were not actually cited or given link to?) so I'll try to do a reply instead. The weird wording is because of this.

ALRIGHT, UPLOADING THE COMMENT AS PICTURE BECASUE APPARENTLY THEY'RE TOO RAUNCHY FOR THE AUTOMATED MODERATOR 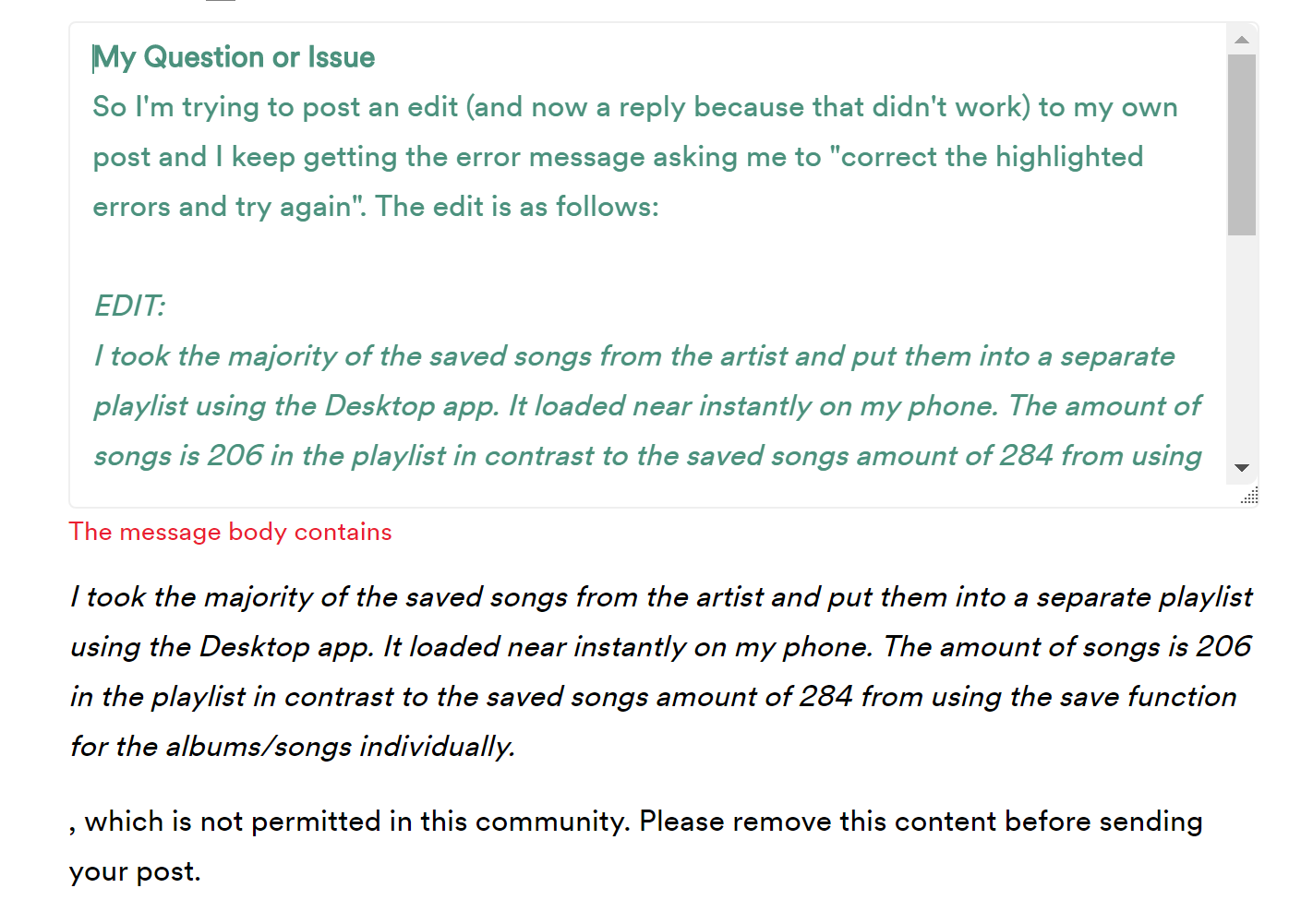