I've noticed that sometimes when i'm using Spotify, the notification that shows which music is being played disapears from the status bar. I no longer get the status of the app and the controls from the lock screen are missing too. This usualy happens if i've previously connected my phone to my car's bluetooth, which is setted to launch Spotify uppon pairing. This might be due to the way the app is launched because when i force close it and open it again from the drawer, it works as expected. 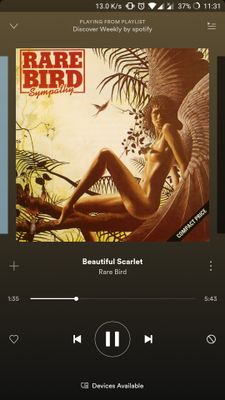 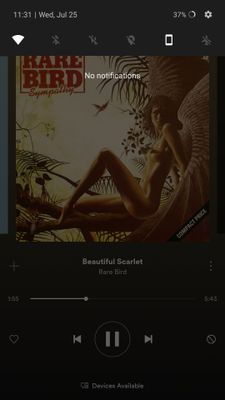 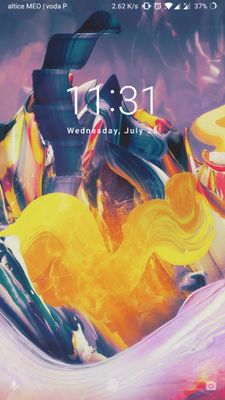 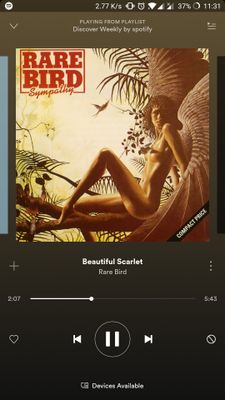 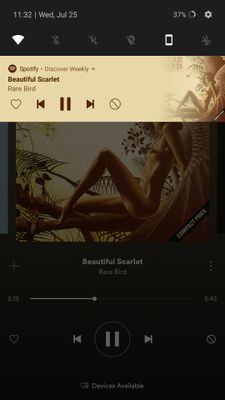 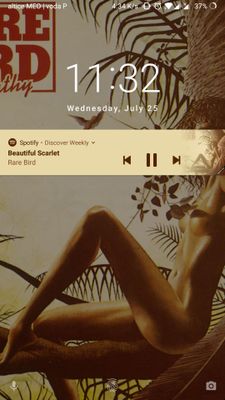 Hey @jorfao, welcome to the community!

Could you send us your exact Spotify version numbers? Also, have you tried reinstalling the app to see if it helps?

You can also try restarting your phone before testing this again.

“Music acts like a magic key, to which the most tightly closed heart opens.”
― Maria Augusta von Trapp
Reply
0 Likes

I think I'm having the same issue - notifications not appearing, but if I force close and re-open they start showing up again.

I'm also getting a separate issue at the same time as the notifications not working when skipping songs. I can skip two songs and the UI (in the image annotated 'Song playing' in original post) reacts normally, but when I go to skip the third (or any subsequent) song, the cover image and song title/artist stops updating. Dropping out of this screen and going back into it allows me to skip forward two songs again, but any subsequent songs then still don't update the UI. This bug seems to go away after a force close/restart.

Hey @samuelhwilliams, welcome to the Community!

In your case, it'd be best to try a quick reinstall to see if it helps. If not, it'd be best if you make your own thread for this separate issue.

I had this issue about a month ago and reinstalled to alleviate the problem.

It recently returned which is pretty upsetting. I really don't want to do a monthly reinstall and redownload hundreds of songs. No other music app has this issue.

I am having the same issues as @samuelhwilliams detailed very well, which is first aparent

I definitly do not want to reinstall and have to redownload gigabytes of data. (is it possible to refresh the app and not have to re-download songs?)

The issue is only about a week old for me, been using spotify a short time now, I noticed right away when my car would not update with song info. It was fine for the first few weeks, so I know it happened with the recent update on the Sept 5th. to 8.4.70.666 armv7