Songs being removed from my playlists

Songs being removed from my playlists

Seems like either spotify or my terrible phone is deleting songs from my playlists. I highly doubt it's my phone though as the songs are deleted from all my playlists including liked songs. I usually notice when I'm listening to daily mixes and a song pops up that I've liked and added to playlists with no green heart next to it. I then re like it and add it back to my playlists. This seems to happen pretty rarely luckily but I have quite a few songs in my playlists. I might just not be noticing. Wondering if there's a fix, it's being worked on, or if it's my garbage phone.

Also has anybody else noticed it looks like spotify fixed the shuffle play issues. It seems like shuffle play doesn't keep playing the same songs over and over again anymore. If it is fixed thank you spotify! That was so annoying

Turns out it's not just a song being added twice, it's my crappy phone. Sorry to waste your time peoples. I couldn't search my playlists before since I used to have the free membership. Now that I can, I see it must've been my phone glitching as some songs are just added twice. Since adding the same song to a playlist twice wasn't even an option with the free membership it must have been my phone.. or maybe the app glitching. Either way thanks for the replies

Thanks for reaching out to us about this, and apologies for the delay!

Just to confirm, are you talking about songs in your Daily Mix which you are clicking the "heart" (💚) icon on, and which are being added to your Favorite Songs playlist?

If so, then could you provide us with a bit more information on this:

Once we have this information, we will be able to help you out further.

Looking forward to your reply!

And to answer your questions

"After clicking 💚 on the song(s) that have been removed once before, do they get removed again at a later stage?"

Unfortunately I'm not sure if this happens. So far it looks like random songs. I haven't noticed any songs being removed more than once .It also doesn't matter how long the song has been in my playlists. It's happened to songs I've recently added and songs that have been on my playlists for months.

"Have you noticed any other suspicious activity on your account, for example random devices appearing on Connect?"

No suspicious activity so far. My phone is quite terrible with apps though. It's constantly having glitches with various apps I use. For example I'll be listening to a song and at the end of the song it will say "Now enjoy the next 30 minutes of Ad free listening" as if I watched an add. My phone also shuts off if I leave spotify paused while I sleep. It acts like it's battery died but once I connect it to a charger it's battery charge jumps back up to over 75 percent some times. It has a hole lot of other glitches though, not just with spotify.

In this case, we'd recommend heading over here to find more info.

On another note, let us know if, on your Android device, the setting Show unplayable songs is toggled on or off. If it's toggled off, it's possible that the songs that you're not seeing any more are no longer available on Spotify. This can happen if licencing agreements with the artist/labels, or ownership of rights, has changed. Hopefully it will reappear soon.

Hope this helps clear things up!

KaterinaModerator
Help others find this answer and click "Accept as Solution".
If you appreciate an answer, maybe give it a Like.
Are you new to the Community? Take a moment to introduce yourself!
Reply
1 Like

Nothing on the link really applied unfortunately. The thing is if I notice a song was removed from my playlists I can add it back right away. It's not like it disappeared It's just removed from every playlist I've added it to. And I've even gone to bed listening a song that was in my playlists, wake up in the morning, notice it's missing, then add it back to my playlists it disappeared from. So I doubt It's because the song became unavailable do to licensing agreements whatever. That is unless a song becoming unavailable on spotify causes that song to be removed from all of my playlists and then becomes available again less than 24hours later.

I'd like to think this is my crappy phone but the more I think about it the more I doubt it. Unless my phone stores playlists on its memory. I know that's not the case though because I can and have deleted and reinstalled spotify with the playlists still intact. I think it's a funky glitch with spotify but Idk

Hope that helps! Let us know if you have further questions.

Thanks for the advice. I'll change my passwords n stuff just in case. I really doubt somebody would go through the trouble of selecting a single song and removing that song from multiple playlists. You'd need to literally scroll through hundreds of songs to find a song to remove it from each playlist.

Would deleting your cache somehow affect this? I noticed this seems to happen every time I delete my cache. I would leave the cache alone but the cache eventually grows to taking up multiple gigabytes of I don't

Clearing cache shouldn't be a problem.

Could you let us know if it's always the same song(s) being removed? We'll investigate further.

So far it's been completely random songs. I upgraded to premium about two days ago. Not sure if that will change anything. So far I haven't noticed any removed since upgrading but it can be over a month before I notice a missing song. I'll keep an eye out

Thanks for letting us know.

Do keep us posted on this - we'll be here if you need any further help.

Found out the problem to some if not all of the "deleted" songs. They may not have been removed after all. The screen shot shows that the song "Tal Uno" is in my "All" playlist twice with the only difference being one says it's in an album called "Singles" and the other just says it's "Tal Uno" again likely being a single. So I'm guessing some bands have multiple singles (individual songs not released In an album) that they upload to spotify individually that they then later re upload to spotify but grouped into an album. Not sure if this is the case for all of the songs but I'll keep an eye out and update later.

Tal Uno is a really good song by the way 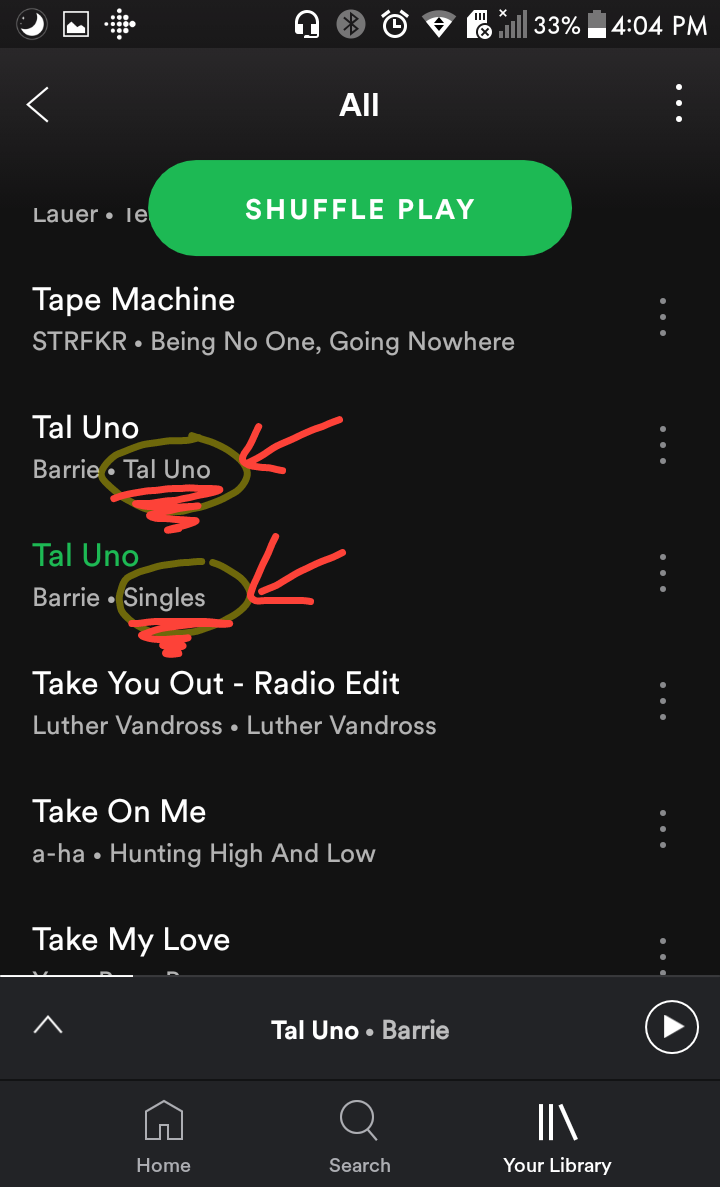 Turns out it's not just a song being added twice, it's my crappy phone. Sorry to waste your time peoples. I couldn't search my playlists before since I used to have the free membership. Now that I can, I see it must've been my phone glitching as some songs are just added twice. Since adding the same song to a playlist twice wasn't even an option with the free membership it must have been my phone.. or maybe the app glitching. Either way thanks for the replies

Thanks for letting us know!

No worries - as you said, sometimes artists can upload multiple versions of the same song (e.g. first the single, then the song within the full album, and even if they show the same number of streams, they have different URIs).

If you have any further questions, feel free to reach out. We'll be right here.