Spotify Android app using a LOT of data on 3G!

Spotify Android app using a LOT of data on 3G!

I didn't use Spotify yesterday until the preview app was announced and I installed it. Since installing it yesterday shortly after it was announced I've been using it a fair amount.

I have only listened to music in playlists already downloaded for offline use, but Spotify itself has been online.

In Settings 'Download over 2G/3G' is set to OFF - although as stated I have not been listening to anything requiring a download and have also not sync'd any new playlists, except while on wifi last night when I sync'd one new album.

In the two days, 19th and 20th, Android shows Spotify as having used nearly 100MB of network traffic. 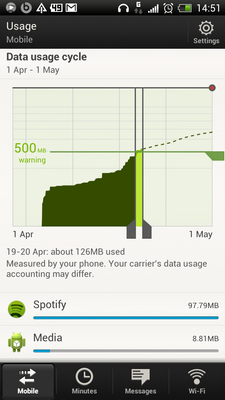 This is worrying. Why is it using so much data? I am on a data plan that restricts how much 'streaming and downloading' data I am entitled to use, so am worried that I am going to get throttled due to this.

Can others with the new app please check their own usage amounts?

I had a temporary solution for this while in the beta. Should probably still work now, although I haven't tested yet if last.fm will still scrobble.

If you are on android ICS do the following:

I hope this helps those also under tyranny of their service providers. Mark as solution if this helped you.


Question: How many playlists do you have? I have MANY...

Who's that question directed to?

I have many playlists too, but the ONLY ones I actually listen to while out and about are those sync'd offline

100 MB is a lot? tee hee. Maybe it's all that high res artwork. I shot past 1 GB yesterday, now up to 1.27 GB. But I enabled Download over 3G as well as Extreme Quality and have been deliberately listening to albums I knew weren't alreay offline synced, so that data splurge wasn't unexpected. Fortunately my cap is a generous 3GB/month but I'll be losing this soon. So, I expect to be leaving T-Mobile then will go with either 3 or GifGaf.

p.s. none of your embedded images are showing up for me - all I see is a yellow triangle.

Yeah I know. Not a huge amount in the grand scheme of things ... just seems a heck of a lot given I haven't been doing anything with the app that should have used anywhere near that much.

I wonder if the beta app is sending usage/debug info to the developers?

I suppose it's most likely to be the art, as noted.

It's possible ... but I've probably only listened to 10-15 albums and I can't imagine a single piece of artwork being that large.

Unless it's downloading the same piece of artwork individually for each track in each album and/or for every album I already have in an offline playlist - still an issue.

Will see if the usage starts to tail off over the coming days - if not then this is not the explanation.

I already experienced big data usage before the beta update! Spotify has been killing my data plan in the past three months - i started disabling mobile internet while using spotify to counter this behaviour 😕

nonetheless, i really like the lockscreen widget! awesome feature when using the phone in your car for music

Quick update. Used Spotify for about an hour on the way home last night - listened to maybe 12-15 tracks that again were already sync'd for offline listening. Spotify data usage was just shy of 20MB.

Some other interesting info about that "bug":

i didn't use spotify yesterday and at the evening android 4.0.4 says that spotify uses 9 MB of data (in background!!!!! > which is right, i did not use the app). all playlists where synced to offline few days before...

Listened to two and a bit sync'd albums on the way home tonight - 30MB usage. All of those song were sync'd while on wifi last night, so no need to refresh artwork or file quality.

exilis
Newbie
Another one with unexpected data usage, not high but I sync everything offline over wifi, and everything in the app seems to be set up right.
0 Likes

Does it also do this in offline mode?

Could the mobile apps be using peer-to-peer sharing?

See this Idea regarding data use on the desktop version for info:

Hmmm, that would certainly explain it!

I think I read somewhere that the mobile apps did not use P2P though. Maybe the new version does, but at the very least I'd hope for this to be disabled when on a mobile network with the 'Download over 2G/3G' switched off

End of my billing month and Spotify has used 364MB of data on a 2G/3G mobile network.

I have only listened to offline sync'd tracks while on mobile - the only syncing of new material I have done was while on wifi.

Given that the beta was released half way through the month that's unacceptable - two thirds of my monthly allowance. On what?

I installed the app about 2 weeks ago and so far spotify has used 1.18gb, even though I almost exclusively listen to my 1 downloaded playlist on it (41 songs).

Considering that most people don't have unlimited bandwidth these days since mobile carriers seem intent on screwing people over, this should probably be the highest priority thing to look at.

I'm having the same problem. After installing the beta and disabling the sync over 3G I still managed to get a 100MB+ usage per day(!) while only listening to offline available albums. As I am on a 1GB limit per month, I uninstalled the beta and reverted back to the old app. Spotify really should look into this!

licenced
Community Legend
This is not fixed and is a killer. I'm honestly surprised more people haven't reported this - most contracts still have limited data and Spotify is eating that entire allowance if allowed to stay online
----------------
Listening on Windows, Android and Sonos. Tweeting it at @davelicence
0 Likes

licenced
Community Legend
Today Spotify used 135MB of data ... in the 7 hours between when I left wiring range and when I put it into offline mode.

All this while the 'download over 3g' setting is off AND Spotify is in the background where its not really supposed to be doing anything!
----------------
Listening on Windows, Android and Sonos. Tweeting it at @davelicence
0 Likes

The exact same thing has happened to me with the beta and Google Play versions of the app, but I think the problem is that data usage is being mis-reported, rather than the app is actually using a lot of data. For example, in 'data usage' under settings it says I've used 311mb so far this month, 249mb of which are from spotify. However, Vodafone say I've used 210mb so far this month, so clearly something isn't adding up. What's annoying is that it effectively renders the data warning/cap on my phone useless, as it thinks Spotify is using way more data than it really is. I'm on a Galaxy Nexus running 4.0.4