Every now and then while listening to Spotify on my laptop, the Spotify app on my phone will launch and whatever song I was listening to will resume playing on there.  My phone is locked when this happens.  This is extremely annoying.

This started happening about 2 weeks ago.  Not sure if the problem lies with the Android app or desktop client.  Any idea why this is happening?

What the heck.  That doesn't seem right.  Why would we need to reinstall the app rather than have this fixed via an update?  I've gotten numerous updates for both the desktop software and Android app (just installed one right now - maybe this one will fix the issue?).  Sounds like one of those lazy, basic tech support script steps.

It happened again today.  I started listening on the Windows desktop app and my Nexus 6P started playing the same song.  Both were playing at the same time!!  It was darn embarassing in the office having Rage Against The Machine screaming "F-U I won't do what you tell me!"

It's happening to me a lot, and I'm not too happy with reinstalling as I have to download gigs of music every time... is there no solution for this yet?

Well, that saves me from contacting them, hopefully they will fix this. Thanks

We were aware of an issue with Connect across multiple devices, but this should have been fixed by now.

Could you guys let us know the following:

We'll see what we can suggest 🙂

It's even worse because somehow even when my bluetooth was connected it still played from my phone rather play on my a2dp bluetooth where i usually play. I never play spotify from my phone speakers!

After 2'th time i did reopen spotify and closed it, but it still did the same.
After 3'th time i did switch my phone to airplain mode, but that's not a solution.

Btw, How to even close spotify?
Asking because it still show playback notifications on my phone when i start play on my desktop.

@Leonardo - Here's the answers to your question:

@Leonardo - Here's the answers to your question:

Device and Spotify version (on both devices).

Operating system (on both devices).

Is this happening over WiFi or 3G/4G?

When did this start happening exactly? Was it after an update?

Have you tried reinstalling the app or device? Does it help?

I hadn't had this happen since the time I posted in this thread, but it just happened again. This time the scenario was a bit different. I was listening to a song on my work computer through the Spotify desktop client. My phone was connected to WiFi. I added a song to a playlist on the desktop, and immediately Spotify started playing from my phone and stopped on the computer. This time I think it had something to do with Spotify downloading the song I just added to the playlist, since I have that playlist set to download to my phone.

Hi, I'm a member of the team at Spotify working with Spotify Connect.
First of all, thanks for reporting! and sorry for the inconvenience. 🙁
I will be investigating this issue so I'm trying to collect information to be able to fix it, so, would you be so kind to answer the following questions?
1. Which version of the Android Spotify were you using the last time this happened? (Version number, like 8.40)
2. Were you using the Spotify Connect device picker (That would be the screen you see after tapping on "Devices Available") in the Android app before the issue (even if you used it many hours before)?

Great timing as it just happened right now 5 tracks into an album.  As for your questions:

1. Which version of the Android Spotify were you using the last time this happened?

2. Were you using the Spotify Connect device picker (That would be the screen you see after tapping on "Devices Available") in the Android app before the issue (even if you used it many hours before)?

The desktop software detects my phone on the network and the app on my phone takes over.  I'll be more than happy to fire up Android Studio and keep an eye on the logs - perhaps they can provide some useful info.

Thanks for the responses and your patience.

Regarding the Android logs: Thanks for your kind offer, but I'm afraid Logcat won't reveal much on a release build (We do log very little on release builds for the sake of security).

Certain piece of logic in the app would pull playback to the phone if a speaker or headphone (wired or bluetooth) is connected, but this does not seem to be your case. That was the reason of question 3.

Another possible explanation was a bug in the Android client that happened when using the device picker to transfer the playback to the local device and later restoring the app session. That was making the app to unexpectedly pull playback when restoring the session. That should be fixed in 8.4.1, but since you did not open the device picker, it doesn't sound like your issue either.

I will to analyze some Spotify Connect logs to find out what is happening.
Reply
0 Likes

This has been happening to me everyday for the last 2 weeks. It's very annoying

1. Which version of the Android Spotify were you using the last time this happened? (Version number, like 8.40)

2. Were you using the Spotify Connect device picker (That would be the screen you see after tapping on "Devices Available") in the Android app before the issue (even if you used it many hours before)?

Only the device. It's not connected to any bluetooth device.

Screenshot is from when I tried to explain the problem to the support guy.. 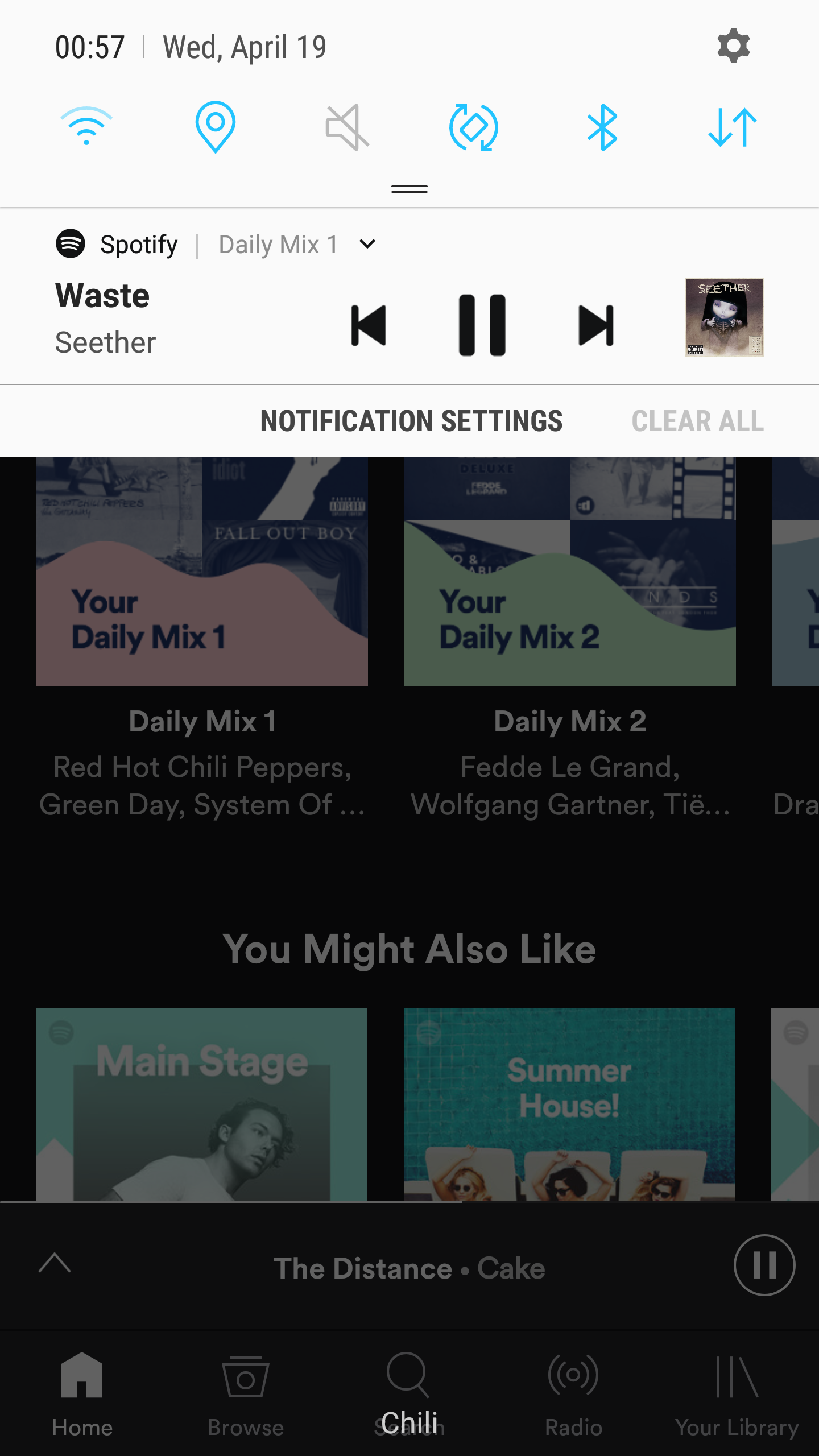 These answers match those I would be giving to the questions related to this problem.

Once more, thanks for your responses and patience.

I'm still gathering some information to be able to confirm (or develop) the fix for the issue.

Of those affected by the issue and running the Spotify app version 8.4.0,

how many did see the following popup and selected "Listen on this phone" some time before the issue was experienced (minutes, hours)? 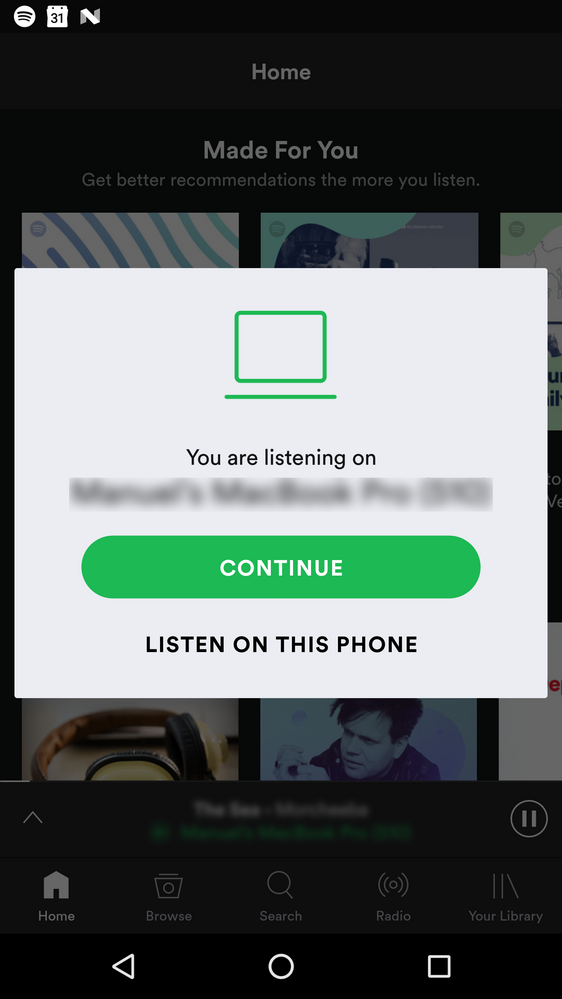 Couple of minutes. But then it happened again several hours later without touching the phone

I haven't noticed any popups before the issue happens, usually my phone is idle (screen off) on the other side of the room. I will start to pay more attention to see if this happens and post again.