Desktop: I searched on the Microsoft Store but it doesn't specify the version, so ._.?

I often use Spotify integrations like the Xbox Game Bar and Discord, so I realized the problem using that. From one day to the next, as if it had happened randomly, it didn't show what I was playing, so I tried checking my settings, restarting my PC, reinstalling the desktop app, performing a clean reinstall, downloading it from the download page, then the Microsoft Store, nothing. I launched the Android app and played something, and it worked, both Discord and the Game Bar were saying what I was playing. Then I played something on the Desktop app and something else on the Web Player/Android App, where they synced. It's like I have two differents accounts with exactly the same name, playlists, preferences and liked songs, Spotify connect doesn't work, but if I use the Desktop app, it says on every device what I was playing recently. Here are the results. On the first screenshot, I had the web and the app opened at the same time, but I could play diferents songs without Spotify Connect reacting, on the second screenshot, there's what Discord detected, and on the third screenshot I clicked on both Spotify Connect's buttons, and as you can see, the desktop app doesn't sync with the web player and my phone. 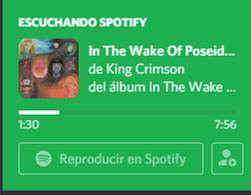 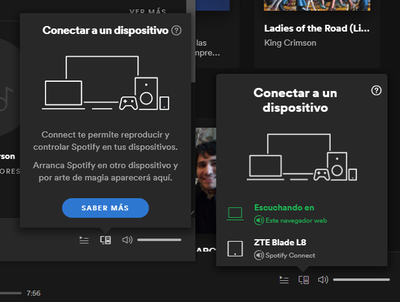 On another note, we recommend disconnecting and then connecting again the Discord app following these steps.

Also, we suggest that you take a look at this article and follow the steps there to ensure the Connect feature's optimal performance.

Keep us in the loop 🙂

I already tried singing out everywhere, disconnecting Discord from my account [Also the Game Bar, I mentioned it, and with my phone Discord show what i'm playing, so I don't think the problem is Discord, at least in this case] and uninstalling the Spotify from the Microsoft Store and downloading it again from the web page, making sure that there's no rests on Local and Roaming. It's the same after all this time, and as I said, both the web player and the Android app works fine.

Could you try using a different Internet connection, like another WiFi network or mobile data and let us know if that makes any difference?

Also, can you try logging in to a different account, like a friend's or relative's, on your devices to see if that works properly? This would help us narrow down the possible cause of this issue.

Excuse me for replying too late, but i'm here again. I think I already have six months with this kind of bug.

So, I already tried even with a friend's account and switching nets with my mobile data, here's a pair of screenshots.

song which appears at home screen

First of all, when I logged on his account, the song he was listening before didn't appear in the Desktop app, in fact, it was empty, but it appear in the web player. So, in definitively, it's an error from the app. 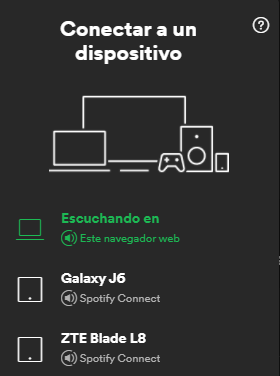 Then I logged with my phone and he with his. Mine's the ZTE, his the Samsung J6. We did some test here and there, I had to explain to him what's Connect and how it works tho, I searched for a song in the Web Player and using connect I explained how I could put music to his phone. 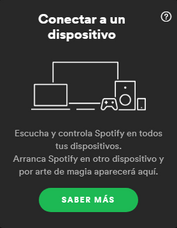 However, Connect in the Desktop app didn't work, it's still empty.

This is from when I put the song on his phone via Connect.

And as in the original post, I tried listening to two songs, the left is the web player and right the desktop app, the 'Listening in Galaxy J6' didn't appear on the second one tho. And, however, I could listen to two songs with the same account. 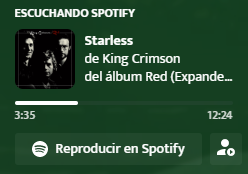 Here's what his Discord detected. Is like the Desktop app is unsyncronized and apart from all the other devices.

I already said that I tried performing a clean reinstall, downloading from the Microsoft Store and everything I could, so I don't know what to do now. Thanks for reading, and please, help me.

Thanks for keeping us posted.

Just to confirm, do you still experience the issue after cleaning up the hosts file on your PC? Check out this article for more info on how you can do this.

If this persists after performing this step, try logging in to your Spotify account on a different PC to check if you experience the same. This will show if the issue might be specifically related to the device setup.

Hope this helps. Let us know how it goes.

I used hosts to restrict some websites that I don't like too much, but I don't need it anymore, so I cleaned it. 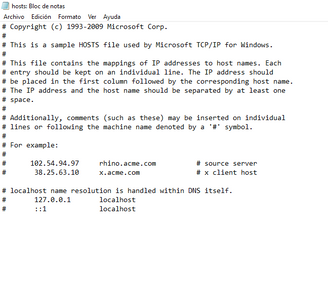 Then I instaled Spotify on another PC that my family got and logged with my account, even with hosts cleaned and another PC using my account I could make this.

Two songs at the same time

So yes, it's device related, somehow. 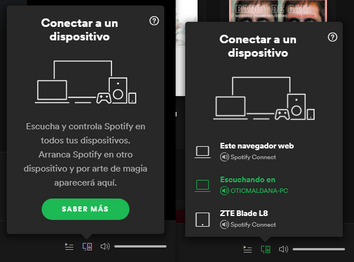 Desktop app's connect on the left, Web player's on the right

This is my desktop device name, OTICMALDANA is the other one.

And, also, I recently changed my profile picture, the desktop app didn't update it, but the rest of devices did.

Web player with the new picture

Desktop app with the unsynced picture 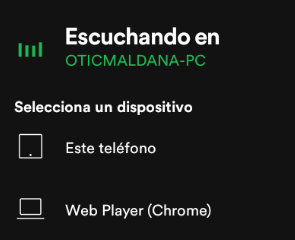 And my phone's connect

Thanks for doing these tests and keeping us in the loop.

From all the info gathered so far it would seem that something is interfering with the app's connection to our servers on the original PC. Can you please confirm that Spotify is added as exception to your Windows Firewall and any other antivirus apps you might have running? it's also a good idea to make sure that all permissions are enabled.

For viruses and that kind of stuff I only use Windows Defender and myself, so there's no problem about that. Searching in the firewall I realized that one of the two spotifies were disabled on private net and the other one in public, so I turn them on.

And though I was sure that the firewall would do something, it was the same.

Thank for getting back to us with some more info.

Before we can advise you further we'll need you to confirm if you experience the same after logging in to your Spotify account on another PC. This will help us check if the issue might be specifically related to the particular setup of the original device in use.

Next thing, could you check if everything else on your PC works as expected, besides the Spotify desktop app? It'd also be great if you can test if the issue persists when connecting your PC to a mobile hotspot.

In case you still observe this after trying out the above steps, next step is trying to launch your Windows OS in a Safe Mode and check if the app behaves the same way.

Yea, I already tried logging in another PC, it works in another devices, but on this specific PC it doesn't. Or at least that was before I tried using another user on the PC that doesn't work. I installed the app from the website and logged in, it works as expected. It might be something that it's messed up in my user, but I don't know what could it be, because I tried a clean reinstall too.

Everythings besides Spotify works fine on the PC, and I tried yesterday using safe mode, it's still messed up there.

Thank you for getting back with us.

So far, we believe this issue is generated directly from your network environment. Though it really can have many causes like firewalls, router settings, VPNs, network drivers, etc.

We'd also like to clarify something from your last post. What do you mean by saying that the desktop app worked before you tried using another account?

Lastly, please follow these steps to reset your network settings:

Let us know how it goes!

I mean, I tried using another windows user in the PC that has the issue, with the same internet, and the app worked at is should, so I though it can be my user; but I already tried a clean reinstall.

I did the network reset and it didn't work, but at least now the profile pictures are the same.

Also, I use last.fm, and I tried scrobbling from the app with the issue, it didn't work, it only scrobbles from the devices that shows what am I playing and sync with Connect.

Thank you for that clarification!

Taking that into consideration, we can try with a new account.

You can create a new one here and test it on your devices. If everything works fine, we suggest you keep it and transfer your saved music and playlists with this guide.

You can try Musconv tool,

It is best for this porpuse