Spotify auto-update seems to be soft-locking Windows 11 with the Controlled Folder Access feature turned on. When auto-update happens, the name of the new Spotify executable is different from the previous one (something along the lines of SpotifyAB.SpotifyMusic_1.185.895.0_x86__xxxxxxxxxxxxx).

During the update, Spotify attempts to access the "/Music" folder (even if "Local Files" feature from Spotify settings is turned off), but since the executable has changed, Windows Security will block the operation.

What ends up happening is Windows 11 soft-locking with no file operations of any kind being possible any longer (this will hang most applications in short order) and no new applications of any kind being possible to launch. Windows GUI will, however, remain responsive (you can use the mouse). But since not even Ctrl+Alt+Del works at this point, the OS is quite royally frozen. The only possibility at this point is a manual reset of the computer.

After a reboot, a notification from Windows Security will pop up, telling the user that Spotify was blocked from making changes to "/Music" folder. Once a security exception is granted to the new executable via the Controlled Folder Access Settings, the problem goes away until the next update.

Now, there are a couple of fundamental problems with this:

- If Windows 11 Controlled Folder Access is turned on, turning the setting off for just /Music folder cannot be done (Windows seems to define a couple of hard-set folders whose access rights are set to stone).

- Spotify shouldn't peek around in my /Music folder anyway during installation (or any other time for that matter) if I have the "Local Files" setting turned off.

- Spotify auto-updates cannot be turned off, so this is a regular occurrence.

PS. I don't know if having the My Documents folder set to OneDrive cloud has anything to do with this issue, but since it might, I've also mentioned that above. 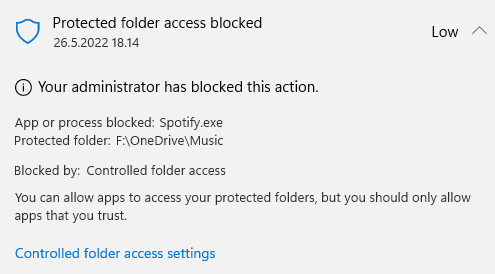 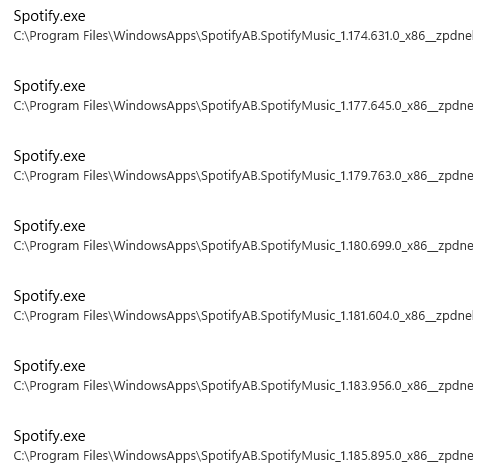 Thank you for the detailed description.
We'll do our best to help out!

This could very well be related to your Spotify being inside OneDrive but there's something else I'd like to take into account beforehand.
Take a look at this video and see if the steps are applicable in your case as well, although they may slightly differ, taking into account you're using Windows 11.
We'll be on the lookout for your response 🙂

Thanks. I actually already watched this video earlier while searching for a solution to this problem.

I feel like I need to clarify one misconception first: My Spotify application isn't installed in a OneDrive folder; Just the Windows Music folder location has been changed from C:\Users\whatever\Music to X:\OneDrive\Music.

But back to the video. The case its attempting to resolve is a scenario where the user is unable to grant a security exception for Spotify.exe in the first place, and the blocked access notification is displayed every single time Spotify application is launched.

This is different from my problem where Spotify app only gets blocked when the application name/container changes, which happens during updates since Spotify updates always rename the executable. I can grant the required exception just fine once the new name is known, I just need to re-grant it during every single update (along with the other problems mentioned above).

(Furthermore, even the proposed solution to the problem in the Youtube video is a bit dubious since granting full inheritable control for all users in windows application folder kind of defeats the idea of security in the first place, but I digress.)

Thank you for your reply and the detailed information you've provided.

The app is currently built with these access requirements and is not compatible with restricted folders. So in order to use Spotify you'll need to enable access. You won't be able to use Spotify without these issues otherwise.

We hope that this cleared things up for you.

I think a bit more clarification is still in order. The problem here isn't programmatic access to \Program Files\WindowsApps\ folder; The problem is Spotify accessing the \Music folder during application update.

Windows Security will block the Spotify update file accessing \Music no matter what usage rights are granted to \WindowsApps because the executable has changed. Disabling \Music folder protection is not possible when Controlled Folder Access is enabled.

So the only solution (workaround, really) is to disable Controlled Folder Access feature in Windows 11 altogether. Is that what you're suggesting?

Have you tried removing access to the local files paths or replacing it with a folder that isn't protected and add the one where Spotify is installed as a source? 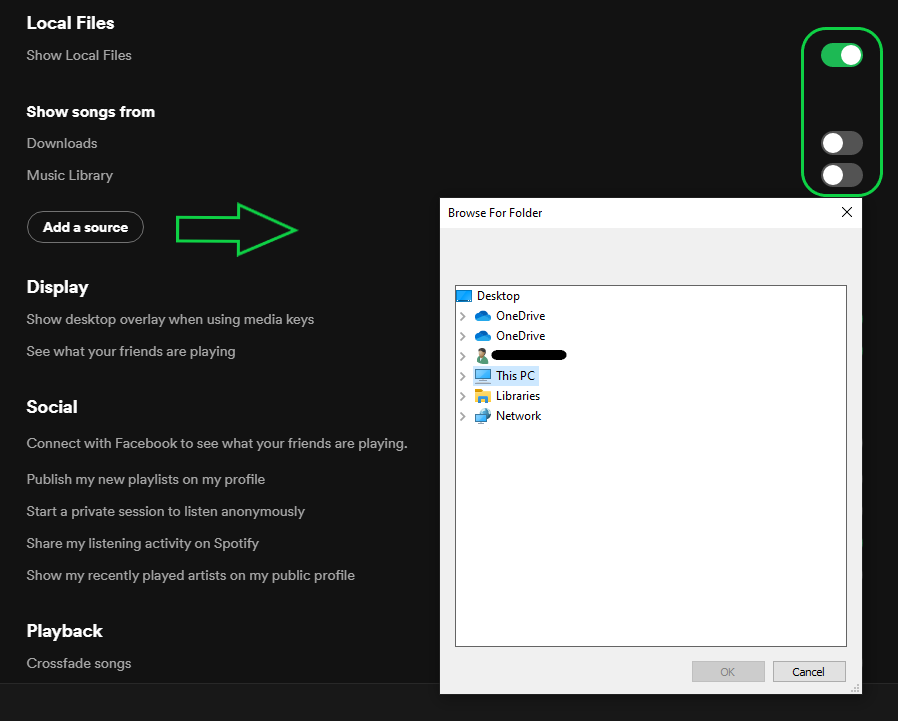 You need to switch on local files, then toggle off any folders shown underneath, after which you can turn local files off again.

The hidden submenu did have both options selected; I turned them off. It remains to be seen whether this has any effect -- I'll know more after the next update cycle.

It does seem like a bug, though, if sub-options of a disabled menu continue to operate in the background.

Is there really no way to turn the updates off? Seems like I'm getting a crash every other week.