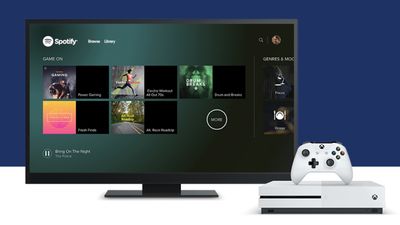 why can't it come to xbox 360 as well as xbox one? I really think you should include it on the xbox 360 as you would be reaching alot of people. It's already a shame that Microsoft have discontinued the xbox 360 and part of Xbox one s consoles. But yeah I think you(spotify) should introduce the app on xbox 360!

I'm having issues with my Xbox one S not showing up on available devices on my Samsung note 8. They are connected to the same network via a Buffalo Air Station Wi-Fi router.

I want to add that, somehow, by magic?, the sound is now coming out in all 6 speakers when playing music through Spotify on my XBox One. What can I say? Multiple restarts, over a period of several days, may have help? I thought I was going to need to purchase an AV Reveicer but it looks like the mariage between my XBox One and my lowly Samsung Home Theater is finally consumed!!! Thank you ALL for contributing your help.

Hi, would really like to have cross-fade on Xbox ONE - have looked through the settings but not available.  Would be a nice compliment for continual playing - can't have 'dead-air' between songs...seriously 😉

Works great except I'm getting advertisements even though it's linked to my premium account.

I have a Xbox one and installed the Spotify app. For some reason i’m not able to get any sound. Removed and installed IT several times but problem remains the same. How can I fix this?

TuanLVT
Newbie
Switch to ps4 lol... It's the same app there

No.. There is NOTHING wrong with the app. I ise it every day... I think the user that complained may have issues though..