Hi, I tried out your new design, which I have mixed feelings about, but nevermind that. The most annoying thing I come over in the new Spotify (for iPhone by the way) is the dumb, big, overlapping, unnecessary shuffle play button that pops up everywhere. Is this a bug or is this on purpose? Could at least had add an option for it. Also, it doesn't look streamlined at all with the current design. Did it even occur that not everyone wants a shuffle play button?

Hey folks,
As some of you will have noticed, this has changed on iOS.
We've updated the idea, so that we can update everyone more accurately with regards to Android.
We're marking this as a 'Good idea', too.
Please know that your feedback is reaching the right teams here.
We'll post an update if anything changes!
Thanks

Personally I think since you have the option to toggle 'shuffle' in the bottom left hand corner while viewing a currently playing song that this huge, bulky shuffle button is pretty unnecessary...

I do not care of the button´s colour, size or placement - but please - do not take away the function "Shuffle"!

Definitely stupid idea to put such a big button in everwhere even when you are scrolling.

Agreed, way too big and distracting, a totally unnecessary use of limited screen space.

It reminds me of a phone my Grandma had, which had oversized number buttons on it so she could dial more easily. I suggest being able to slide the shuffle button to the right, so it just leaves a small tab on the side of the screen in case anyone's Grandma wants to get it back.

This is coming from a devoted and loyal user of yours that happens to be yours truly. A music lover, fascinated by a beautiful lush melody from a Manic Street Preachers tune and saddened by listening to the blue beauty of Anthony & the Johnsons. And thanks to the beautiful gift of the streaming service you have provided for us my music life has not been the same. I have had the pleasure of listening to almost everything my momentary thoughts demand effortlessly, legally and by paying a very low price. So my sincerity towards your contribution to my music world is simply insatiable.

Having followed music in forms of CDs, tapes, MP3s and occasionally LPs and EPs for years, I have grown this inevitable sense of discipline in the way I organize and listen to my music. And your program has a high emphasize on that. Everything is well-labeled. It's a joy listening to Spotify at any time for any occasion. I appreciate pop music as much as everyone else. But I also appreciate what is not pop. And how comprehensively good you are at that side of the story, too.

I have begun a new phase in life in which I wouldn't like to scrutinize things and go deep into original intentions of doing things. So I normally take things as they appear to be. It’s much more convenient this way. But somehow I’d rather not start this routine when it comes to music. I know you value music more than anything else. And I know there are now thousands of people out there who reach for your service at every second. I don’t want you to change that. But as a small part of your strong community, I would like to share my slight disappointment with a button you have emphasized on in your new mobile interface. That being said, your new desktop interface is sexy, elegant and very modern. I have Spotify on my PC, iMac and iPhone.

So this is what happened: With my last update of my iPhone app, there has appeared an annoying presence of a giant green button called “Shuffle Play” on each and every page containing songs I would like to play. And I cannot stand its presence. Yes I do like to shuffle my playlists sometimes. And I’m sure there was a firm reason deducted by you to put this button up there. But this emphasize to me is very degrading to music in the form of albums. There are more people out there like me who spend hours curating playlists and then putting them into the right order. Many people like me would like to listen to albums “as they are”, that is, as the original artist intended. If Arcade Fire wanted us to shuffle their albums, they would not number their songs on their Funeral album. And in the shuffle vs. not shuffle argument, I have always opted for the latter. And I assure you I’m not alone in this. Shuffling is a part of the work. So let’s just put it there as a mere option just like repeat, etc. 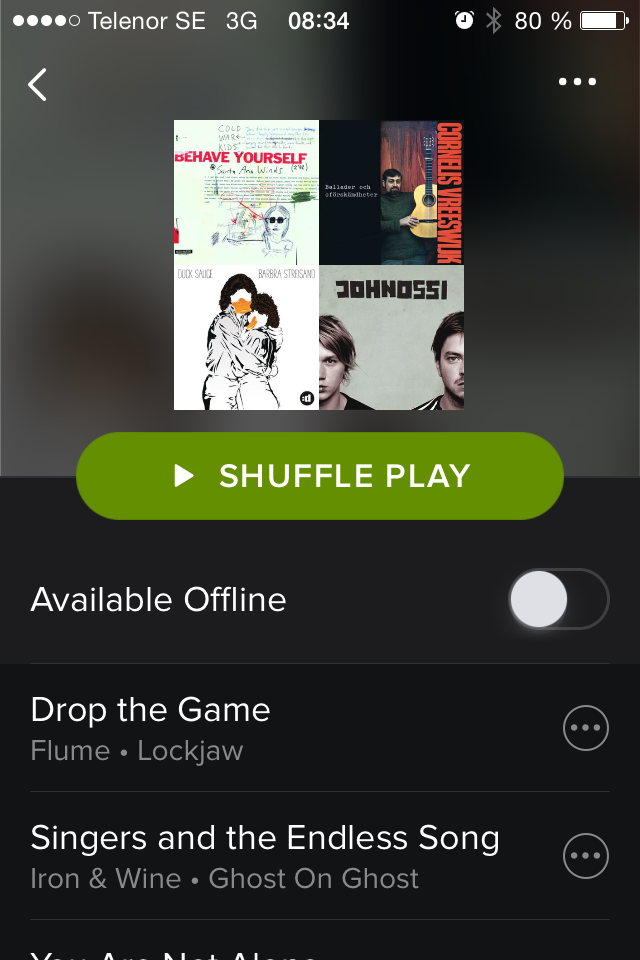 Spotify is supposed to be a music player for everyone! It’s for that girl in Philippines who would like to listen to K-Pop while dry-cleaning and it is also for me who passes by your office in Birger Jarlsgatan in Stockholm thinking how cool would it be to visit the office. I clarify this a bit further with an example:

Last week, my boss asked a colleague of mine “So what kind of artists do you listen to?”. And the reply was more than disappointing: “My favorite artists are usually the ones on Spotify top list!” That for me equals “I don’t even like music”. Music for her is a filler. And to me, music is not a filler. Music completely stands out for itself. But my message here is that both of us should get what they want from you. And we do! It’s just that, I have a feeling you are valuing her approach to listening to music more than I do. And that shuffle button strengthens this idea that mainstream pop, chart toppers and everything that is being played from a small pub in Dublin to a luxurious disco in Berlin is more important for you and so are these kinds of listeners. But that is contradictive to what you really are. That is contradictive to the fact that people find a rarity album from a forgotten garage rock band that they had never heard of and discover their music through you. So what does this big shuffle button imply? Shuffle everything? Forget about the tracklisting and the artist and shuffle it all regardless.

Can someone please set me free from this disturbing thoughts in my head and clarify the existence of such button? I take you with me everywhere I go. I encourage everyone to be active and share their favorite music. And then I get this feeling that I’m not a favorite user of yours, that you’d rather go with the girl who chooses the top list over discovering good music and literally puts zero effect into her music streaming experience.

I want you to acknowledge the presence of people like me in your community. I’m not expecting much of you. But I am worth your attention. I have tried almost every other streaming service out there and you outrun them with by a great distance. So I’d rather stick with you and drag all my music friends with me. Thank you!

mobedi - Thanks for your interesting feedback!

I've moved your topic over here in the original thread about the shuffle button, so it won't get lost. 😉

Let's not make this a debate over the value of shuffle as a feature. Shuffle is a fine feature. It doesn't need to disappear for people who are registering complaints to be happy. The issue is only one of design: the shuffle button does not need to be enormous. (Fire alarm handles in schools and hospitals are smaller than this new shuffle button.) Also, does this post really need to be labeled a new idea? It's really more of a bug or a flaw. Reduce the shuffle button size, and possibly move it from being the central focus of your otherwise-fine looking redesign.

StylopHone
Casual Listener
PLEASE GET RID OF THAT SHUFFLE BUTTON! WORST UX EVER!!!! Who the hell thought it a good idea?? Insane!
8 Likes