I am using the desktop windows 10 and mobile Android app - and on all platforms the option to make a playlist collaborative has disappeared, please help get it back.

It is only showing option to invite collaborator but when I add my friends as collaborator they are unable to add songs to the playlist.

Thank you for reaching out to the Community. This seems odd and we'd like to have a closer look into this.

Just to confirm, have you followed the steps that's provided in this article?

If you followed the steps above without any success, can you have someone log in with their account on your devices to see if the issue persists? This will help us understand if it's account related or not.

The option to make collaborative is not appearing. It is just showing invite collaborators. same thing is happening with other devices too.

Hope this clears things up. Don't hesitate to reach out again if you have more questions.

This is inaccurate, the "Invite collaborators" button only gives you a secret link that expires after 24 hours. Several people have reported that we cannot make playlists collaborative, and the Invite Collaborators option is not a viable solution, since even that feature is broken and the invitees cannot add songs either.

Could you let us know whether you and your friends are using the desktop app, the mobile app or the Web Player? Please note that editing a collaborative playlist's content and permissions isn't currently possible on the Web Player. You can check the users' permissions with the following steps: 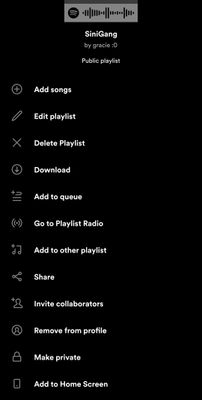 Thanks for getting in touch about this.

Could you let us know if when they try to accept the invite, a pop up appears for them with the option "Join playlist"?

Hi, the exact same issue is happening to me. I have no collaborative playlist option and the invite collaborators link doesn't work- my friends are unable to add songs into the playlist, picture attached. We're all using mobile apps.

Thanks for replying to my comment. I sent the same link (again) through the invite collaborator icon, but they said that they don't see a pop-up, nor could they add songs. The Make Collaborative button had disappeared, the collaborative icon beside the playlist's title is nowhere to be seen, but I can see they they're collaborators in the playlist although (again) not able to have control over the playlist. See photos below. :)) (taken from Windows 11 laptop) 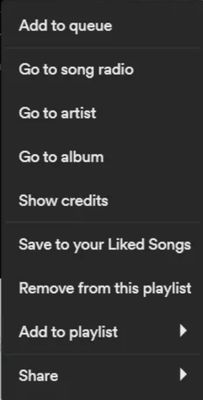 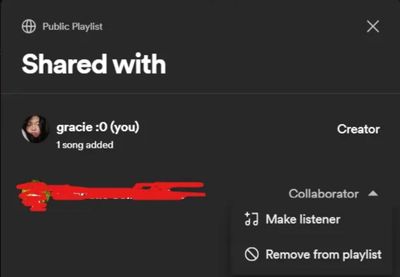 I have the same problem

I too am having this issue! No matter what I do the people I invite to be collaborators can’t edit the playlist. They don’t even show up under profiles in the playlist.

Thanks for getting back to us

Could you check if the same thing happens when you try inviting collaborators after clicking on the icon next to the download button on the desktop app?

If nothing changes, could you please share with us the following? We'll look into this further.

I am also having this issue. There is no "make collaborative" option on my android phone anymore (although I had this feature last week), nor is available on my windows 10 desktop app or the webplayer on chrome. I only see the "invite collaborators" option but it will not allow my collaborators to add songs even when they have permission.

I opened the account for my language learning discord server with 60000+ people, the idea was to make collaborative lists to share music from different countries among the users.

After creating the account I made two lists to test the features of collaborative lists with the staff team of the server. I was able to make them collaborative and they could add songs to them.

Then I made 60 lists more and when I wanted to make them collaborative to start sharing them I could not. The button had disappeared.

Troubleshooting: I've tried to make them collaborative from my desktop Spotify, people from the staff team have tried in their devices as well. I tried to make collaborative lists in my personal account and I could not (both accounts are located in Argentina).

It's worth nothing that sharing invite links to collaborate (as opposed to making the lists collaborative) is not a solution for me since I have 60 or more lists that I must make public in the server and the links last up to 24h. Making it completely inconvenient to update them.

Updated my Spotify as of late night. So most current version on my iPhone 12. My wife and I have both attempted to make a playlist and add each other via the option “invite collaborators”. It never works. I’ve followed every trouble shooting tips from the support forums. From making sure we followed the playlist and even downloaded it.

I went to my desktop (windows 10) uninstalled and reinstalled the app. Inviting through there doesn’t work either.

on both platforms the option to make the playlist collaborative is missing.

We went ahead and passed in on to the right team. We'll keep you posted once we have news.

The Community is here for you if there's anything else!

Ver Moderator
Help others find this answer and click "Accept as Solution".
If you appreciate an answer, maybe give it a Like.
Are you new to the Community? Take a moment to introduce yourself!
Reply
4 Likes

The option to make a playlist collaborative doesn't exist anymore.

I have an old collaborative playlist that I made private. Now I want to revert it and bring it back to being collaborative without having to send another invite however I am not seeing the "Make Collaborative" option. Is this a bug or have they removed it?

Thanks for posting in the thread!

Right-clicking on a playlist should give you the option to invite collaborators.
If it doesn't show up, send us a screenshot of the menu and we'll take a look 🙂