Announcements
It looks like all’s running smoothly again! Get more info over here.

Hello, I am a Premium USA Android User, Samsung Galaxy Note 8 to be particular.

I am a Spotify Veteran for several years now and the Library sorting system has undergone many modifications during my time. If you can recall, we have been able to organize by, at one point or another:

A lot of these seem the same because they are. Some of these distinctions have been used, then discarded, and some seemingly reinstated and renamed, over the years etc. This is especially frustrating concerning knowledge established in older blog posts that are helpful at the time but then the nomenclature becomes outdated with each UI update.

Most of my Spotify library growth and organization was done during Late 2017 through this year, 2019. The primary organization method used at the time was "Saving." The best and most intuitive way to organize and curate a music library with the "saving" system (In my opinion) was the following:

Chances are, if you can relate to this somewhat tedious process, you are a huge music buff like me and part of your concern over what songs to save may lie in the fact that Spotify has a 10,000 song limit you keep hitting (a whole other issue that has been raised countless times on this forum but refuses to be fixed on account of what appears to me, to be the logic of "Well it only inconveniences less than 5% of our users so honestly, who cares").

At any rate, I really appreciated this system. More importantly, I oriented my curation and listen experience AROUND this system. And don't get me wrong, I'm not upset that it changed from "saved" to "liked" a couple months ago or whatever. I'm upset because I've encountered a LOSS of functionality, features/user-friendliness, and I'm not certain whether the Spotify Dev Team is even aware of some of these nuances they instated, or took away with the update.

THE 2 HUGE DIFFERENCES AND EXPERIENCES REMOVED WITH THE UPDATE:

1) No More Curated Artists Discographies in Your Library for Listening.

If you put in the work to organize your music, there was a big difference and benefit between just going to an artist in the search results, versus pulling up the artists by going to your library and going to the artists tab. If you're able to save songs within albums and basically have "your own versions" of an artist's album tracklist accessible to you, which means also with multiple albums and singles saved, you have a comprehensive collection/ready-to-play mix of ONLY songs you like by that artists.

To my knowledge, there is now no way of getting this mix anymore. Since the update, if you have an album saved by an artist, and you navigate through your library to access that album instead of playing it through the search results, it no longer makes a difference. It will play EVERY song on that album, REGARDLESS OF WHETHER YOU HAVE INDIVIDUAL SONGS SAVED OR NOT and you accessed it through your library and not the official search results.

This did not used to happen, and it is a huge disappointment. I would like to know why you guys decided the mechanic for "Saving an Album" and "Saving Songs" should be separated into 2 distinct features, which are currently "Save Album to Library" and "Liked Songs."

2) Managing Existing Saved/Liked/Added Songs Must Be Done One by One.

Part of the update made it so that what used to be the "Songs" tab, which was every single song you had saved, turned into "Liked Songs", which is now accessible in your Playlists tab. Not necessarily an issue on its own.

However, as pointed out in 1) above, the changes in functionality naturally lends itself to another, equally frustrating issue. By making these two distinct systems, the "whole of your spotify library is not equal to the sum of its parts," so to speak.

What I mean by this is, to my understanding, the sum of your "Liked Songs" no longer comprises what your library is truly comprised of if you were to consider the albums saved. If you have ever:

Then the sum of all the songs you've ever "liked" ≠ the songs that comprise all of your "saved albums."

IN THE OLD UI, UNSAVING AN ALBUM AUTOMATICALLY UNLIKED EVERY SONG IN THE TRACKLIST, AND VICE VERSA. NOW, NOTHING HAPPENS WHEN YOU SAVE OR UNSAVE AN ALBUM, IF THE INDIVIDUAL SONGS ARE OR AREN'T ALREADY IN YOUR "LIKED SONGS", NOTHING HAS CHANGED.

The following are screenshots from the Desktop App however the same concept applies to the mobile app. Notice the difference in caption/function when I hover the mouse over the album heart icon vs. the song heart icon: 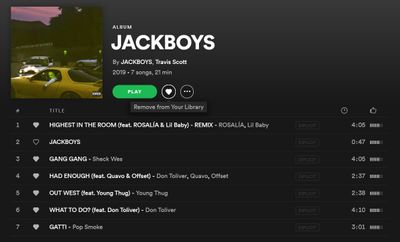 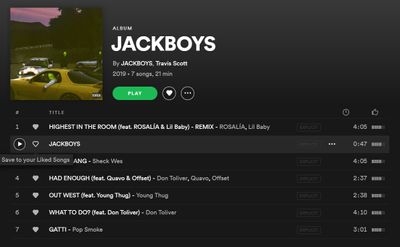 To add insult to injury, you still even use the SAME heart icon to signify two different functions! From what I can tell, and clearly I use Spotify far more intensively than the average user, this was a completely unnecessary complication to an existing system that didn't yield any net benefit or additional features. Spotify Rep, please feel free to clarify the intent behind these design choices and I will be glad to embrace them but I genuinely feel like some of these things were overlooked in the design process.

This is, again, a pretty major inconvenience when it comes to playing what you want to hear concerning your library vs. official search results, and also is a huge annoyance concerning organizing your library, trying to make sure that you only have songs saved that you like.

I don't know if anyone is aware of these issues or was even aware these were effects of the new system but I'd like some thoughts, on whether they should be amended, whether there are workarounds for the issues I'm encountering, whether they were considered, etc.

Thanks for your time, I know this is a long post and hopefully I shared something that is helpful to your music listening experience!

Welcome to the Spotify Community and thanks for sharing your feedback regarding the latest 'Your Library' update.

If you wish to see specific future changes, feel free to formulate this as an idea and suggest what could be implemented by Spotify according to your input. To do so:

In the meantime, you can have a look at this Spotify Answer which covers the main elements of the updated 'Your Library' and the related functionalities.

Hope you'll find this helpful. Feel free to reach out to us anytime!

MarioModerator
Help others find this answer and click "Accept as Solution".
If you appreciate my answer, maybe give me a Like.
"There's more to living than only surviving." - Dexter Holland
Reply
0 Likes
SUGGESTED POSTS
Log In