Why are recommendations so terrible

Why are recommendations so terrible

- Listened to a few anime covers, now all my "Discover Weekly" is filled with disgusting covers. I'm trying to "not like" all of them, but it doesn't work.

Note that the songs that you listen to in private sessions may not influence your music recommendations.

Jose_MSpotify Star
Help others find this answer and click "Accept as Solution".
If you appreciate my answer, maybe give me a Like.
Note: I'm not a Spotify employee.
Reply
0 Likes

All songs that I got recommended in the past years are very similar to my most dominant music taste. But that's exactly the problem. It's >50% the same albums on every (weekly?) update. Often I'll listen to a song, at some point decide that I don't like it, and skip to the next on the song. Alas there is no "dislike" as Discover Weekly has, and the recommendation algorithm doesn't seem to pay attention to skipping.

Also, I don't want to listen to my dominant genre all the time. My Daily Mix does reflect my diverse taste, I normally get 6 of them. Similarity of genre shouldn't be the only criterion. Diverse listeners should get diverse recommendations.

If there is a specific song that you would like to stop seeing in you Discover Weekly, you can press the 🚫 button. That way, Spotify will know that you don't want to listen to that song in Discover Weekly.

Hope this helps and have a nice day! 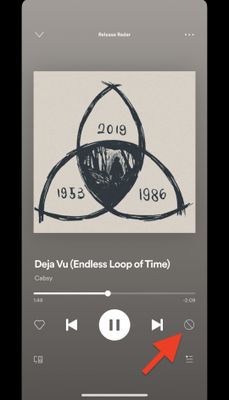 Jose_MSpotify Star
Help others find this answer and click "Accept as Solution".
If you appreciate my answer, maybe give me a Like.
Note: I'm not a Spotify employee.
Reply
0 Likes

Indeed Discover Weekly has that button, nowadays I use it on 50-80% of the songs there. The "Recommended for you" list doesn't seem to have such a button though.

As you said, currently there isn't a like/dislike button for songs that are in a "Recommended for you" list. Therefore, I recommend that you suggest this idea in the Community's Ideas Exchange. That way, users and moderators will be able to vote and comment on it.

Jose_MSpotify Star
Help others find this answer and click "Accept as Solution".
If you appreciate my answer, maybe give me a Like.
Note: I'm not a Spotify employee.
Reply
1 Like

Vividdreaming
Casual Listener
I wish I had this option on Discover Weekly, I can only see it in Daily Playlists. In Discover Weekly, there is a replay symbol instead, which is pretty defunct- I could just hit the << icon if I wanted to hear it again.
I get really terrible suggestions of music styles I NEVER listen too which I would love to block.
I don't understand the algorithm at all. I listen to a really diverse range of music which doesn't include whiney, bland indi pop, but I get a stack of those types of songs suggested.
Reply
2 Likes

As @Jose_M mentioned, there is a way to dislike songs in the Discover Weekly playlist. You can click on the right side next to the song. If you can't see this option, we'd suggest to give these steps a go and run a clean reinstall.

If you want to dislike songs in the Daily Mix playlists, you can log into your account on your phone. Then you can click on the three dot menu and on Hide this song.

If you can't see the dislike button, you can send us screenshot of the playlists. We'll investigate this further.

Hope this was helpful for you. If you have questions, you know where to find us

Ver Moderator
Help others find this answer and click "Accept as Solution".
If you appreciate an answer, maybe give it a Like.
Are you new to the Community? Take a moment to introduce yourself!
Reply
2 Likes

Vividdreaming
Casual Listener
Thanks so much for getting back to me.
It looks like my options are the other way around- I’ve got the 3 dots on
the top right for Discover Weekly & the circle with a line through it is on
the Daily Mix play lists.
Thanks for your help 😃

Same here. What a bummer. It went very well for a long time. But since a year its sheer **bleep**. Its so annoying that I think about a switch back to Apple Music.
I get recommendations for music genres which I've never heard before. Cheap bling bling-techno sound, death metal, endless boring piano **bleep**, tons of cheap produced world music, Russian folk songs … bah. Stop it please. Its not worth the money.

Update:
Since I got a "so called" troubleshoot nothing changed. Still the same problem. What should I say … I canceled Spotify after being a loyal customer for about 9 Years. Spotify is a good example if ignorant managers "playing around" with a great idea. And between all the gimmicks and nice to haves they lost their simple mission: bringing the right music to the right audience. What a fail. Good bye and good luck. 🖖

My Discover weekly and Release Radar is fine most of the time, but I still get a fair amount of Mariachi music ever since that ONE (1) mexican themed dinner party 5-6 years ago. I am still clicking "Remove" half a decade later. When will it end?

I'm a user of the web app, and even I have these problems. In fact, the suggestions are just repeating the same 3 songs! This is outrageous!

The "Recommended" section for a Spotify playlist is one of the most poorly designed, pathetic excuses for a feature I've ever seen. I press the refresh button and it just cycles through the same 10-30 songs, at least 50% of which are just different versions of songs already in the playlist.

And, to add salt to the wound, Spotify doesn't compare song titles, just the song ID. This has resulted in multiple versions of the same song being added to a single playlist without my knowing. It's extremely annoying and, as a software developer myself, I can promise you that fixing/improving the algorithm and functionality would be SO easy.

Also, why are there not options to influence how the "Recommended" section aquires songs? Sometimes I'm looking to discover lesser-known songs/bands of the same genre as the playlist I'm looking at. Other times, I'm looking to add lesser-known songs from artists already present in the playlist. Other times, I want a generic algorithm that cross-references other public playlists containing that song and then recommends songs other people have included in their playlists containing that song, almost like a basic AI. Key word: BASIC.

Seriously, it would be SO easy. And this is just off  the top of my head. What is going on at Spotify? How is it physically possible to be this terrible at your job?

Give TacoManStan a job redesigning the algorithm! This is exactly my problem with Spotify.

I totally agree.  The dislike button should be present not only in the Discover Weekly list but on every automated list that the system generates. It is really frustrating that me liking certain genre forces me to ALWAYS listen to the same songs without a way to tell the algorithm : "ok it was a good suggestion but please I'd love something else".  Song repetition is one of the worst problems this platform has and the tools to train the algorithm are scarce at best.  Own a family plan, but if this doesn't start to improve I'll definitely move it someplace else. This thread is on its third year and the problem reported on the first post is exactly the same nowadays.....what's going on spotify???

That does not work they send it anyway, and send tracks that taunt, and lower people’s self esteems, one of my friends literally had a mental break down and all you would recommend were tracks that further perpetuate their suicidal thoughts, it was disturbing and wrong, and honestly I never wanna see it again, fix your **bleep**ed up Algorithm