The Spotify app on my android seems to have bugged out and is now sorting everything by alphabetical order instead of track # in playlists. This is happening for every type of sorting by artist, recently added etc. For example instead of sorting the new Arctic Monkeys album as Star Treatment (track 1) into One Point Perspective (track 2) into American Sports (track 3) it is now sorting it as American Sports into OPP into ST, no matter whether this is by artist, album, or recently added. This is extremely frustrating at the moment meaning that I cannot listen to albums I've added to playlists in the correct order at the moment. Does anyone know of this is a recent change Spotify made or if there is a option to turn it off somewhere or if it is just a bug?

To clarify - when sorting by recently added it is actually sorting it by newer songs and the way it is intended to, however not in the exact order I added them. If I added Star Treatment before One Point Perspective first it will sort OPP before ST despite me adding the latter first.

Yep! Same here. Here's a couple reddit threads about it too:

This making me wanna off myself straight up

got the same problem

Why does it seem that every few weeks Spotify implements a new 'feature' that consistently makes it worse and less user friendly?

How hard is it to overhaul the settings menu and at least give users the ability to customise these kind of interfaces?

I'm having the same issue. Before when I sorted my music by artist, it would group songs by the same artist by album. Now when I sort by artist, it sorts all of the artist's songs in alphabetical order, mixing up the albums and making it difficult to listen to any album in order.

Absolutely horrendous, makes it impossible to skip forward or backwards to a particular song. It's all sorted by artist but the albums are absolutely random on my device, it's not just that the track numbers are random, Track #1 of Album "X" is followed by Track #5 of album "Z" followed by Track #7 of Album "Y" and so forth. It renders my playlists absolutely useless.

I'll attach a screenshot of this bug. 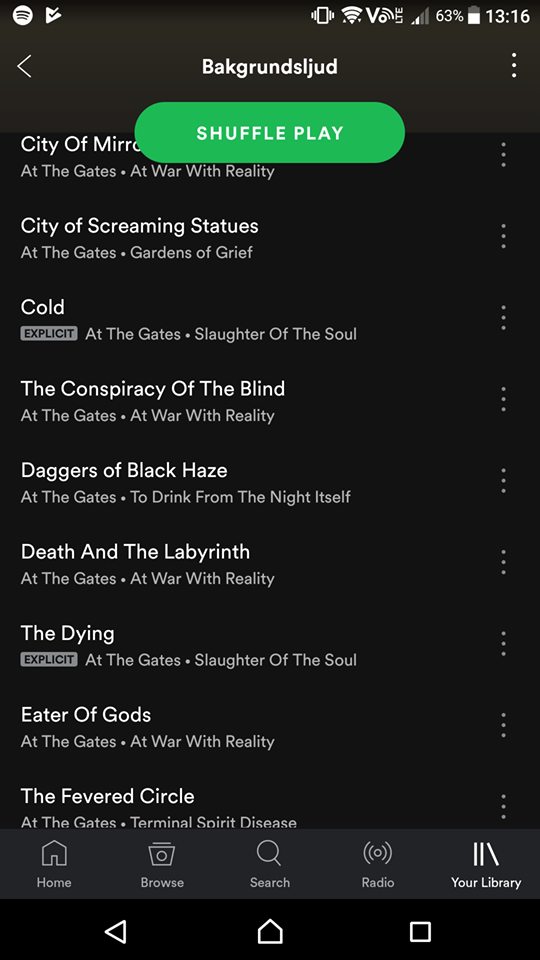