Virtually every service I pay for online pulls this **bleep** - "we've removed funtionality that you value from the service you pay for and there's nothing you can do about it, but 'community input is something we truly value' ". Sure it is. The only input these services value is the input from my bank account.

Well there can be some arguments made that if the implementation of Line In made it difficult to process edits, - at the end of the day it's also a piece of software, and depending on its workings it may be impractical to provide fixes, when what is needed is a complete rewrite.

Obviously this is speculation, there may be entirely other reasons for it.

The point still remains that we need a way to report incorrect metadata, and to have these reports actioned.

@marius Re: "when it comes to crediting people..." that's completely fair. In that case, it was the proper publishing data.

Last.fm has introduced a simple "is this correct? yes/no" system for artist, album & song names, so it's reasonable to assume there's at least some automated, algorithm-based stuff at work there. Mind you, as people scrobble from their own libraries and a number of other sources, Last.fm probably has a lot more data sources it can analyze in order to determine what's right and what isn't. Spotify may not have this option. But the point is that there are things they can do even if human resources are limited to individually moderate and assess community corrections/suggestions

Although Line-In is going away, you can still help to report incorrect content metadata! Just check out this Spotify support article for a how-to on correcting content issues: https://support.spotify.com/article/how-do-i-report-a-content-error-on-spotify/ 🙂

@ItsPurgle that's great, thanks for posting it. This path should have a lot more visibility since Line In has been retired, - otherwise we'll keep having 10-page threads like this one 🙂

When there's a dedicated community, some of the most important things for them are a) that they are being listened to, and b) that their time and effort contributing to this community are not wasted. I hope whatever Spotify does is genuinely guided by these principles.

Good point - but until they actually make the fix I suggested through that form a couple of weeks ago, I will not be spending any of my valuable time using it. Cheers!

There's another function I used Line-In for: you can not select type in the app, so I would go to Line-In so I could select the artist name or piece and copy the text for search purposes. I listen to primarily classical, that often has very long names and "song" titles, and if I decided I'd like to purchase something, I'd select the type from Line-In to help me find the music for purchase. It was also handy to see what label the recording is from, which is not always apparent from the copyright credit. Many classical recordings appear on multiple labels, and if I read about a specific recording, it's sometimes hard to figure out which one I've found on Spotify. Sure, thisn't what it was designed for, but it was functionality I found useful, so the service I pay for is now less useful to me. Minor for sure, but these things have a habit of multiplying.

Disappointing. I enjoyed changing the metadata details and adding moods. It clearly got some usage, based on 26 pages in this forum.

But if it was still a manual process and not automatically changing the actual music metadata, then it was probably a hopeful tool at most anyway.

An earlier post suggested changing the metadata locally only, but that doesn't fix the underlying issue of wrong details on the service to begin with.

So the changes I made in Spotify Line-In did not help? At least you should accept the changes you make

Pardon my french, but what the fk were you guys smoking when you made this charlie-foxtrot of a decision?!

Well there are some instrumental songs that are marked Explicit. Some are even religious in nature. I wish they would not be classified as such.

I'd like to know how you're  going to manage the wrong infos. Hope you come out with a solution soon. 🙂

And I wonder how/where these valuable insights will make their way back to the User level. Perhaps creating a different mechanism for allowing user input, where metadata is inaccurate or needs to be enhanced, would create a win/win for everyone. Otherwise Spotify becomes less user friendly as users need to figure out how to deal with the inaccuracies that abound here.

It's bad cause we've been helping you guys so many times...

"We value your input, but we've made the decision to stop pretending we care."

This is ridiculous, why would you remove it? You didn't even explain why. You can't just remove something people obviously like without giving any reason as to why, that's just shitty communication.

I've been a regular Spotify user since 2015 and I have to say I'm pretty disappointed with several aspects of your product.

Overall it's great and I continue to use it because it's the best music player I'm aware of, but as a company of your size there's basically no excuse for the errors you guys are making. You're doing a lousy job.

This is an example. You also removed the inbox which many users liked. The Android app also sucks. I've encountered several large bugs that still haven't been fixed. Many people have complained about this, it's not just me. Go and look at what your customers say on Reddit.

Just FYI, I'd get rid of the "Help Us Fix Metadata. Have a read and sign up here" banner. I'm seeing it on select pages in the community forum, including this one ❤️ 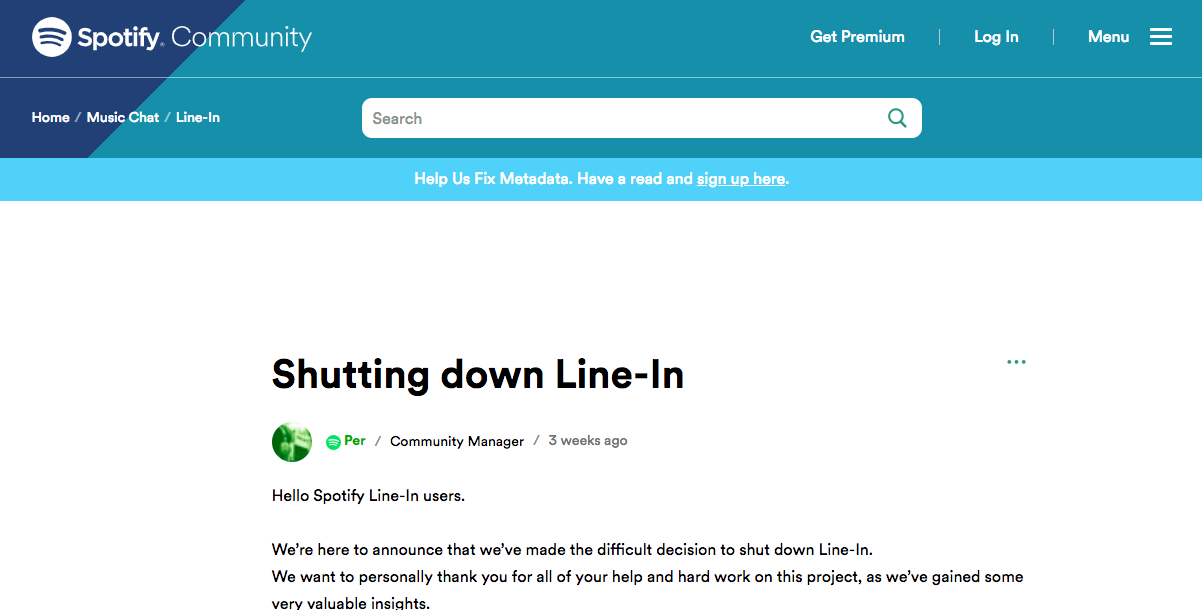 Yes!! It's been weeks and it really makes it seem like no one is minding the store.