Every time for the last month when I open up Spotify and listen to playlists containing songs I've previously liked, they do not register as having been liked, i.e. the heart icon is white & empty and when I right-click the song for details it lists "Save to your Liked Songs" as an option rather than "Remove from your Liked Songs". However, when I go to the "Liked Songs" playlist in my library, the songs are still there, and display duplicates if I like a song a second time, though the first liked version also displays the "Save to your Liked Songs" option in the menu.

I also wonder whether this affecting my suggestions on the "Release Radar" and "Discover Weekly" playlists, since the songs appearing on both of those playlists are frequently the types of songs I'd never listen to, meaning that my main reason for using Spotify - discovering new songs to listen to - is made defunct.

Any help solving this problem would be greatly appreciated.

Logging in today, it appears that this issue has been resolved, however, I will wait for a few days and check again before declaring my issue fully solved

I can 100% confirm spotify forgetting/unliking/dropping liked songs. Kinda awful really. This is the reason i pay instead of maintaining an offline library of thousands upon thousands of songs. There does not seem to be any correlation between the songs. Maybe just random? Hopefully not targeted algorithm based on something like the cost to spotify to play particular songs or something willful and malicious. Read: BEST NOT BE THAT SPOTIFY! Feels SO BAD, am not feel happy of this.

@SammyG3 - glad to hear this has been resolved for you!

@darrickbacon85 - do you mind seeing if your Liked Songs are appearing as expected on the web player or on another device - preferably a mobile device?

If they're appearing fine everywhere else except for on your desktop device, then could you try performing a clean reinstall of the desktop app by following the relevant steps in this Spotify Answer?

I still have this problem. Let's say I'm listening a "suggested radio" (on my PC, or Android phone, there's no difference), I stumble on songs that I'm 100% sure I "hearted" before, and still I find them with no heart.

This happens often. And if I look at the whole Preferite Songs list, I see duplcate songs, near each other, with the same name, the same album etc. 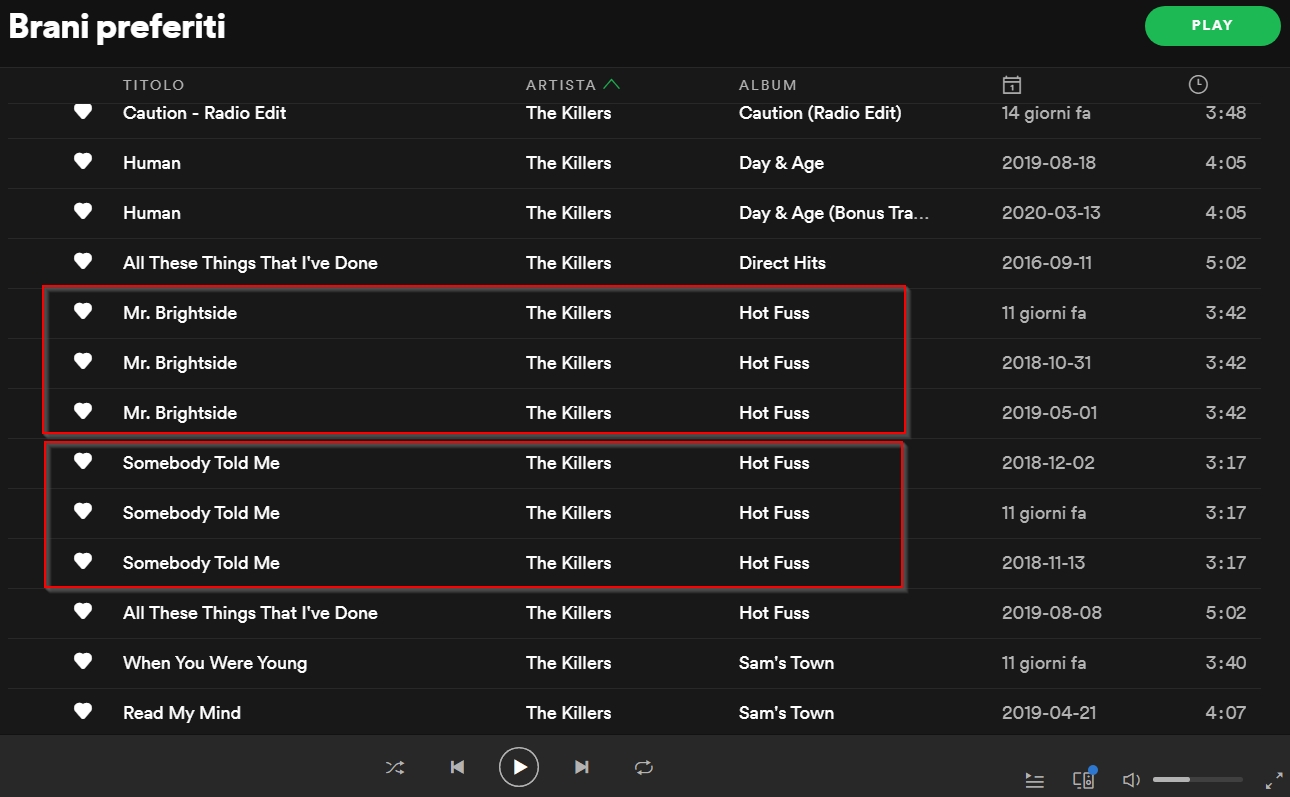 Just had the same issue myself. I was listening to my Liked Songs and came across a track I hadn't heard in a while (track called "Get Lost - Ford. Remix") and put it on repeat quite a few times. Made for some great chill dinner-making music.

Anyway, fast-forward to today, and I put on my "On Repeat" playlist (loving that feature btw), and sure enough there's the track "Get Lost - Ford. Remix" and it no longer has it listed as liked. What the heck? Spotify just dropped it off my liked list, and looking at my Liked Songs list, the list size has dropped from 1,900 a few weeks ago to under 1,600. Super weird and annoying.

I'm experiencing a similar issue. I estimate that hundreds of liked songs are missing from my library. This is happening across all devices. There doesn't seem to be a pattern for which songs are missing. But I KNOW that they are. Some of my favorite music. Songs that are on my "Top songs of 20XX" playlists. One in like 40 songs seem to be missing.

This is infuriating. If this continues I will leave Spotify. This ruins the application.

Same thing here. Why would this be happening? I thought at first it was my mind playing tricks on me, but I have no doubt now, Spotify does forget some of the songs I've clicked like (heart) to. Please Spotify team, any solution to this silly bug?

I've had the same issue. I found all the Likes on songs of one of my favourite bands were missing, including the Like on an Album.

Keep in mind that with the new Library design, liking an Album adds it under Your Library> Music> Albums, but the individual songs are no longer automatically added to your Liked Songs. To do this, click the “…” menu in the Album view and click “Like all songs”. It's possible that the liked songs, that are no longer showing up, were from liked albums. You can find out more about the new Library here.

Hope this helps. Keep us posted if you have any questions.

This was originally reported in August 2019 and is still happening in March 2021. This is basic database management, nearly half the reason of using music-management software.

It seems to be a weird failure to actually link one thing to another thing, because if I unlike one entry, it unlikes both entries, but if I unlike the other one, it only unlikes itself. Regardless, only the "newest like" is considered "True," with the old one no longer being valid outside of this playlist.

The behavior you're describing can happen when an album gets reuploaded by the distributors. If they have different metadata or URIs, the app will check backstage to link to the accurate track, but it will currently miss to transfer the liked status to the newer version.

We've provided guidelines to distributors of what they can do to keep tracks fully in sync and basically overwrite old versions, but we know this is something that occurs. For now we suggest that you unlike the "old" track in the liked songs or saved album and replace it with the new one.

We'll keep working on improving this experience moving forward and advise that you keep the app up to date with the latest version so that you don't miss out on any fixes.

If anything else comes up, we're always a message away.

NovyModerator
Help others find this answer and click "Accept as Solution".
If you appreciate an answer, maybe give it a Like.
Are you new to the Community? Take a moment to introduce yourself!
Reply
1 Like

This happens to me too and it's done with pretty much all of my artists and music. It's so frustrating to have to go back and re-heart hundreds of songs. This needs to be fixed.