We’re happy to say that this should now be fixed for everyone! Just make sure your app is updated to the latest version.

If you're still having trouble, make sure to post a new thread in the relevant help board here.

It is almost July and I am still experiencing (among other problems) the same issue. It drives me crazy. It almost seems like Spotify wants to lose customers. I am currently looking for alternatives because Spotify has really lost touch with its customers.

Help, for two days now I've had no Spotify -- just a tag on screen that keeps asking me to reload page -- which I've done, even removed and reinstalled Spotify but to no good -- on all my devices I just get reload page -- not much customer help either

So, the Recently Played list does exist, but does not work properly for all accounts, unless you are using a Chromecast for playing music.

Can there be a communication about this? Some sort of idea or timeframe for a fix? There are accounts that have clearly not been migrated correctly to be compatible with the new Desktop app, and some sort of clarity on when folks can expect a resolution on this issue will do a lot for assuaging concerns and frustrations regarding the current state of affairs.

It's almost been another 3 weeks.  So, as promised, unless I hear from Spotify in the next few days, I'm cancelling service.

And, at this point, I'm not only cancelling for the lost 'recently played' issue, but also for the complete lack of communication with the community on this problem.

For real, Spotify, at the VERY least, you could have someone take 5 minutes to update us and just tell us you have a plan to fix it and are working on it.  However, like all the other garbage UI changes and unwelcomed Joe Rogan podcast pushing, I would bet you're purposely trying to steer people unnaturally to hunt and peck to rediscover what they've listened to previously under the directive of "making sure all artists get their share of listens."

For all you other community members - take note that this company thinks they are above you and your small problems with their platform.  Your vote is the money you give them every month.  Take the money away from them, and they might, MIGHT realize how far they've come from their roots and start respecting the community again.

In other news, YT Music has been great so far.  It actually reminds me of how awesome the Spotify UI used to be - an uncluttered, simple interface that doesn't advertise random BS that nobody wants.

Thanks to all you other community members who have tried to drive this home.  At this point, I just have to move on.

I don't need 10 Daily Mix suggestions when I open Spotify. I wanna listen to the same albums I've been listening to since I was 12. C'mon Spotify don't do this force feeding bs.

@foug Yes. A little bit of user control over the Home page layout would be nice. Surely that's not asking too much.

@Mihail @Alex @CarlosE @Ivan @Jeremy @Eni @Novy or any other staff member who may come across this message:

As there has been no staff activity on this thread for almost three months now, I can only assume that Spotify has instructed staff not to reply to this thread anymore, and decided that it is ok to abandon / ignore paying users.

If that is the case, it's incredibly disappointing.  If that's not actually the case, then could one of you staff members do us all the courtesy of a simple reply to let us know that this is still an issue that is being worked on?

Same problem but on the open.spotify.com web player.
go to > Queue in the bottom right.

The current queue visible no recently played tab as per all the online instructions and images I could find.

This seems like a rather large issue to just ignore, looks like it has been this way for a few months.
It is affecting multiple people. It seems like this should be a high priority.

I can't go back and like the last song I listen to. This sucks for creating a nice list of music I really like to listen to.
Please have a  look at fixing this. 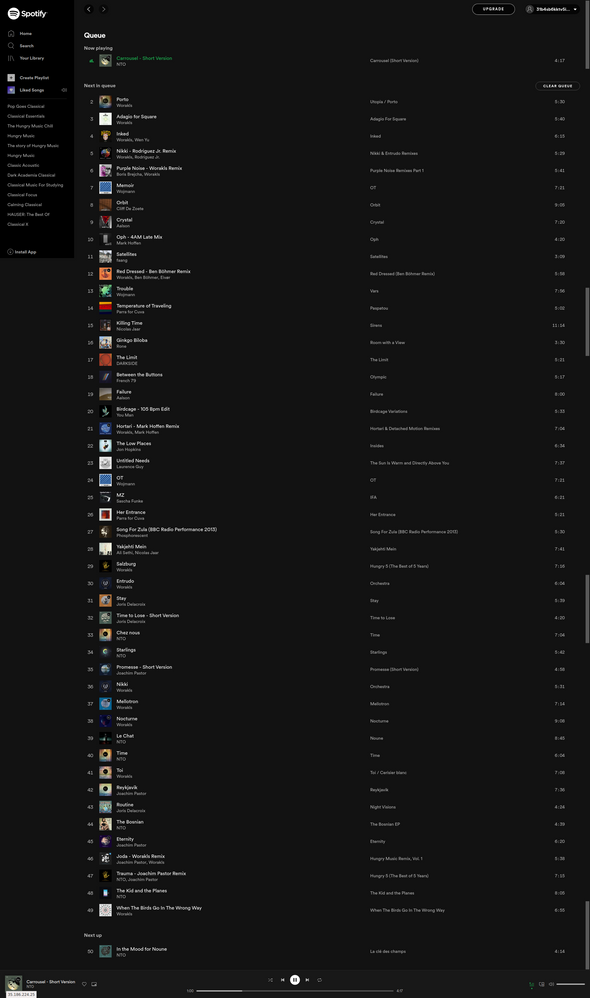 Cancelled premium more than a week ago and, at this point, probably never looking back.

I recommend using Soundiiz to transfer all your albums, artists, etc to whatever service you like.  Personally, I've really enjoyed YT Music.  YT Music = what Spotify used to be.  I have recently played (history) AND the music suggestions are actually relevant to my taste again.  No Joe Rogan Podcast BS anywhere to be seen! 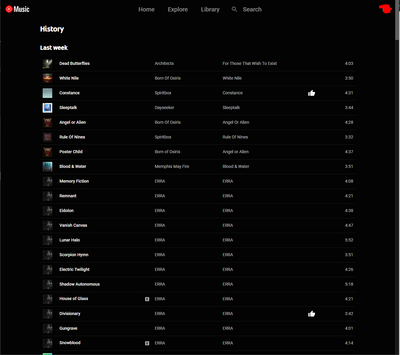 Pinging folks/staff again because the lack of further communication on this matter is proving both frustrating and honestly unprofessional. Don't treat your paying customers with such disregard, but in the effort of trying to describe the problem, seeing that it is not just the Desktop client, but the Web client as well.

The problem exists on the backend, given that for my account, the recently-played request on my account only ever returns 4 results. Ever. The request allows for 50 results to be returned, but only 4 are being saved to my account.

Now, if I were to play on the Web Client or the Desktop Client, I can get more on the Recently Played while the session is active (I haven't closed the client or refreshed the page).

And when I close the client and reopen it, or refresh the web client page...

Oh look, my recently played list is back to 4. Because the request to the API returns 4 results always.

I've explained in previous posts that the three other playlists were playlists that I had played via a Chromecast, with the latest one being the very last thing I had played locally. Those are somehow getting saved correctly to the Recently Played list here. But everything else does not get saved when you play locally, via a client. On the mobile app, the Recently Played list there works just fine.

Now can we get a damned update or communication on this?

Since staff are not actually communicating any more on this thread, might as well be the one to do so:

Just received an update today on the Windows desktop application, 1.1.65.643.g2d707698-a, which seems to have restored the Recently Played list for my account. 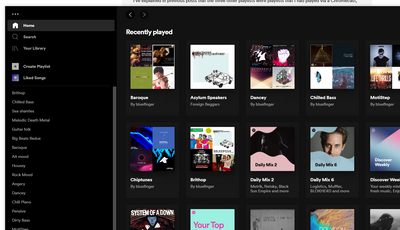 Can others check to see if the latest update has fixed the matter for their accounts? Just to confirm this saga has come to an end or not.