I hear rumours that Spotify will no longer be integrated with Algoriddim djay from 1st July 2020 onwards, is this true?  What are you able to tell me about this?  Do you have plans to integrate with any other DJ software (e.g. Serato, Rekordbox etc.) in the future?

Still working for me today (Aug 1st) in Australia. I have not updated the djay pro app  on my Mac in a few months though. Perhaps that is the secret to keeping it working?

I had to chuckle though at the wedding DJ on here with his 5 grand system complaining about the pending loss of integration. Have you ever thought that by blatantly violating the Spotify TOS you could be part of the reason the agreement is ending?

I have nothing against modern party DJs and the like, but let's not forget that they're paying ten bucks a month for what is essentially an unlimited collection of music while artists are making jack squat. Last time I checked wedding DJs can make upwards of a couple thousand dollars a gig. Pretty sweet deal for them I'd say.

I’m still able to use djay pro with Spotify on iPhone, a month after the date.

Still working for me

I guess it will stop working

Spotify is turning back on DJs because of some DJs would use it on weddings...?

Some financial guy just decided that it was not in there « business model »...

The thing is that Spotify really initiated a game change. It was logical and greatly expected by DJs.

The future of DJ is not downloading every single music.

Of course that the future for DJs is to mix streaming music. It is just obvious, like every digital experience today.

There is no turning back.

They had to think before doing it because a lot of DJs rely on Spotify today. They invested passion, time and money on this. We did it for pure pleasure, to have fun with Spotify.

By the way, the artists that are played during weddings are already well known and well paid.

People who use Spotify on weddings take a big risk if they have no connection. They are playing with fire. But if they had not Spotify you can be certain that they would download their music for free.

Anyway Spotify should give them a legal option : Pro Account for example with a different price

Spotify said that they gave up on support for DJ apps. It means that it can work today but they will not follow if their service work with DJ apps in the future.

Would you plan any event even for free if you are not nearly sure that Spotify works with your app ?

Spotify make announcements and don’t even speak to DJs...

just wanted to notice you, that I'm also having a functional Spotify sub working in DJay on my iPhone SE 2020... weird...

Padfranceschini
Regular
Ah, ok thank you. Tomorrow someone comes to write the same stuff.
Why don’t you all just enjoy it? Weird....

Hehe I am enjoying it ....Im a new Algoriddim user after traktor and serato, and I was doing the research about this on google and found this thread...Since there was an official statement that the integration with spotify would work until end of june... I just wanted to refresh the topic to let people know that Im also using it normally at the moment , nothing special... maybe it will also help someone else while they do their research...

I need to decide wether to subsribe to algoriddim or not, and I have a large spotify collection and spotify integration with Djay is  my primary attribute for decision making will I or will I not buy Djay pro... Tidal is not available in my Country...

Well there are other integrations, SoundCloud, Beat Port etc. built into DJay Pro but to be honest, I think that we’re all in a difficult time. I’m hopeful, Spotify will instead come up with a model for DJs or perhaps a delay on this sunsetting for now... Despite not being a DJ myself, I just enjoy decompressing by mixing and there simply is no better way to do it than this. I use it everyday and discover new and fun ways to enjoy the beautiful library Spotify has to offer.

All the best and stay safe! 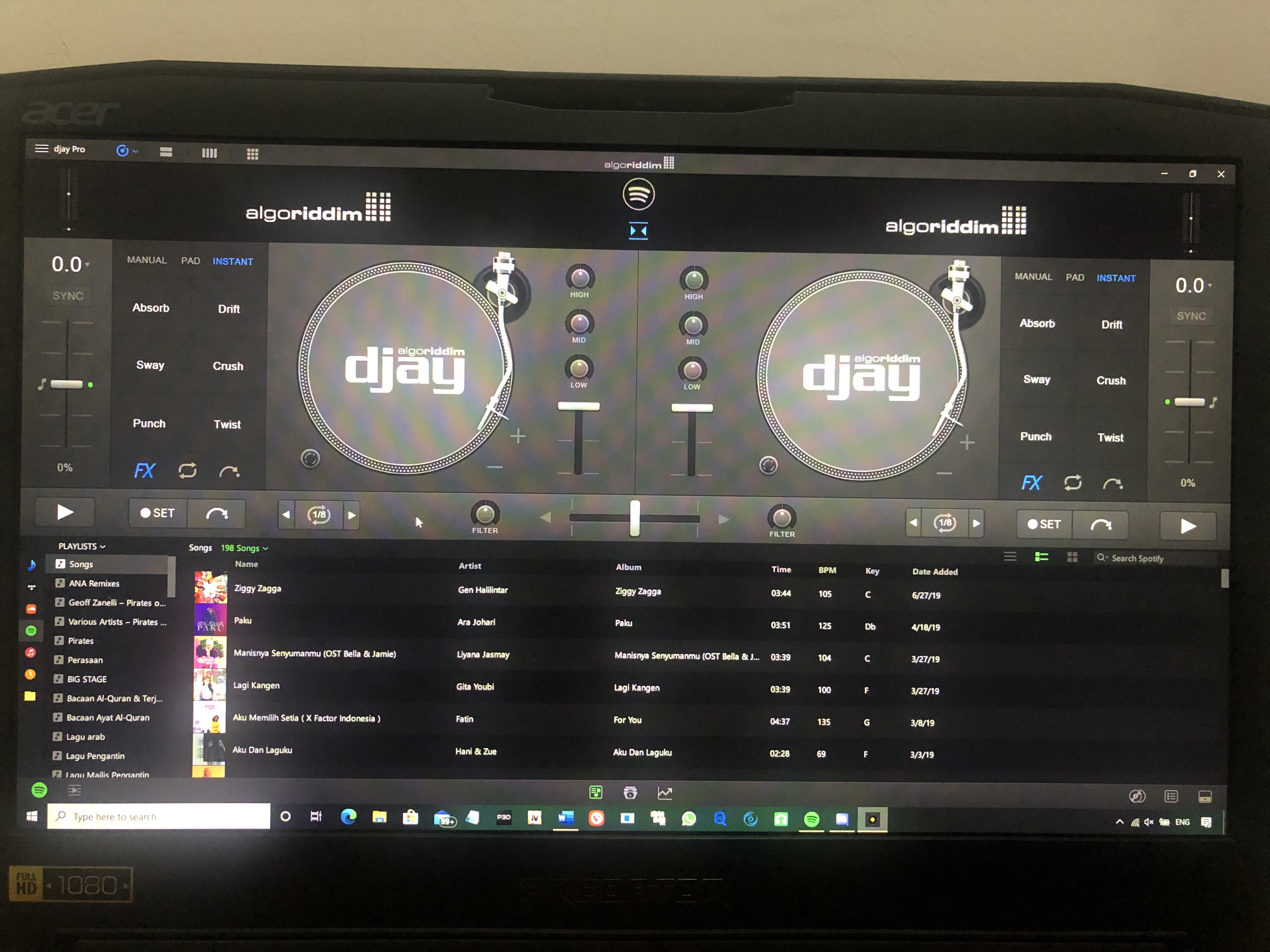 JerBae
Regular
I am totally with Erob, I think he exposed things just as they are in the reality and that is also how I did in the past (taking music free when no streaming was integrated) and that is also why I switched to the Premium Spotify account and then added my family mates. As soon as they enforce their blocking to play in Djay (and in other DJ applications) I switch to SoundCloud Premium because I am already registered free there and already have imported my playlists.
Reply
3 Likes

Just circling back on this - as of this morning I can still use my Spotify through Djay Pro - anyone else has this?

I am not complaining!!

Unless I missed it, I wish they would tell us what's going on. I'm ready to switch to Tidal as soon as Spotify stops working on DJay Pro. I'm also moving to listening to lossless audio and the fact Spotify doesn't support that, is making me more and more tempted to leave.

This is hugely disappointing to learn about. I've considered doing a bit of home dj'ing for years and  just decided to get an entry mixer as I finally had the finance. In researching the one I got I watched quite a few online videos about Spotify integration, granted they were from 2019 (!) but I didn't realise this has now stopped. What a bummer.

I effectively ditched my hard music library and have just focused on expanding my like tracks/albums and playlists on Spotify catalogue so I have nothing recent to use.

Can anyone from the company confirm that there is definitely going to be no solution to this going forward? If not, what a disappointment for what has otherwise been a really great service.

BADWOLF-68
Visitor
Spotify is still working with the Djay app. I was playing it tonight. Don’t know if it’s a cooling off period but as it stands it’s still working.
Reply
1 Like

Please can someone post some good news here. Please continue support for DjayPro...

This is ridiculous. I hope they know how many users they'll lose just over something like this. I'm a proud Spotify user and I tell everyone I know its superior. But its only superior because of partnerships such as the one with Algoriddim. Hope they reconsider and decide not to remove.

Thanks for reaching out and voicing your concerns.

We can confirm that throughout 2020 Spotify will cease to be playable through 3rd party DJ apps. It's possible that for some users the service remains active a while longer, however it's not officially supported and we can't guarantee that it'll function properly. We always take retiring features in Spotify very seriously and we’re pouring our energy into new ways of creating the best experience for our users. We'll share any news on the matter on this page, as soon as there are any.

In the meantime, you can post an idea on our board that requests that the integration with 3rd party DJ apps gets reintroduced. You can learn how do to this here. The Idea Exchange is a great way for us to see how popular a certain idea is with our users and helps us constantly improve the app. You can learn more about it here.

Mihail Moderator
Help others find this answer and click "Accept as Solution".
If you appreciate an answer, maybe give it a Like.
Are you new to the Community? Take a moment to introduce yourself!
Reply
1 Like

If you told us why this integration is being removed, we could post an idea about a better alternative, instead of requesting "that the integration with 3rd party DJ apps gets reintroduced"