Thread was almost immediately closed rather than considered, with directions to post it in "Other Issues" which nobody is allowed to post in - or at least I'm not able to.

Please consider reading this thread and notifying spotify engineering of the issue.

Copy/paste from that thread:

The chromecast device list in "devices" is truncated to five entries. I have five chromecast audio devices in my home, and using the Google Home app I've created two chromecast streaming groups. The groups contain my devices - for example, my "home" group allows me to play my spotify music on all five devices.

The spotify app on IOS only lists up to five chromecast options, and in my setup, I have seven options: five devices, plus two groups.

Reproducing this issue is easy.

Step 2: Using the google music app, select the chromecast streaming button on the top right of the app, note that you see all of your groups + devices listed.

Step 3: In the Spotify IOS app, select the "devices available" button at the bottom of the screen. Note that only five chromecast device + group options are listed.

In the first screenshot shown below, Spotify shows five items, note that the "Home" chromecast group, and "Living Room" chromecast device are missing from the list.

In the second screenshot taken at the same time, the Google Music app shows all seven items (two groups, and five devices).

After the second screenshot. I removed the "Not bedroom" chromecast group from my setup using the "Google Home" app on my IOS device. I then returned to Spotify's devices list.

Note that no matter how many times I restart my IOS device, the devices list remains constant as shown in the third screenshot below. 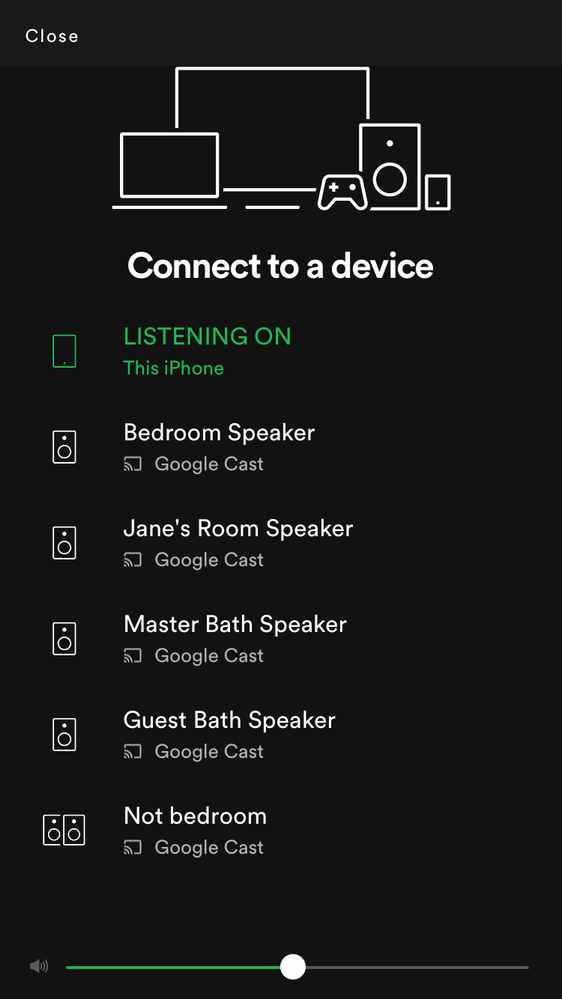 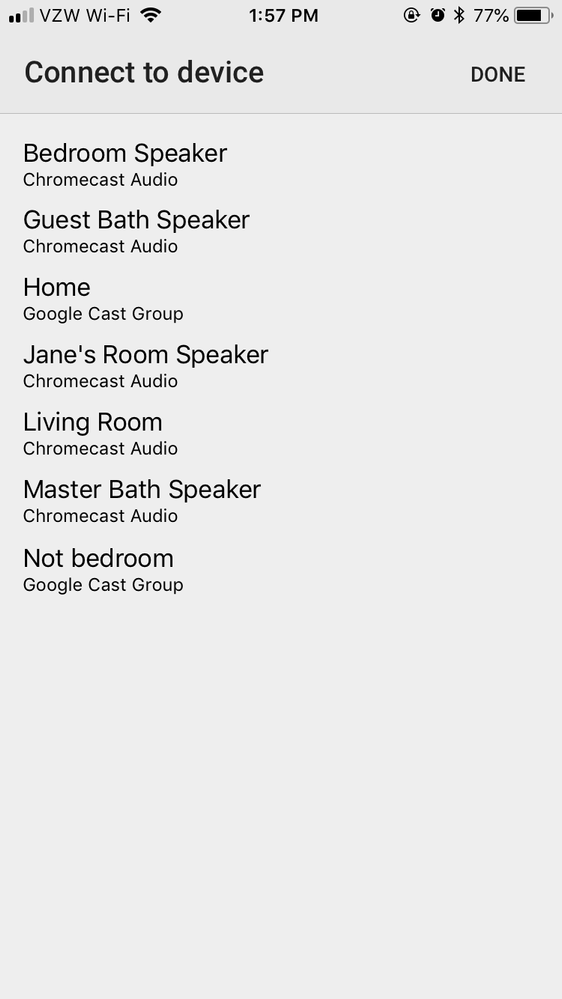 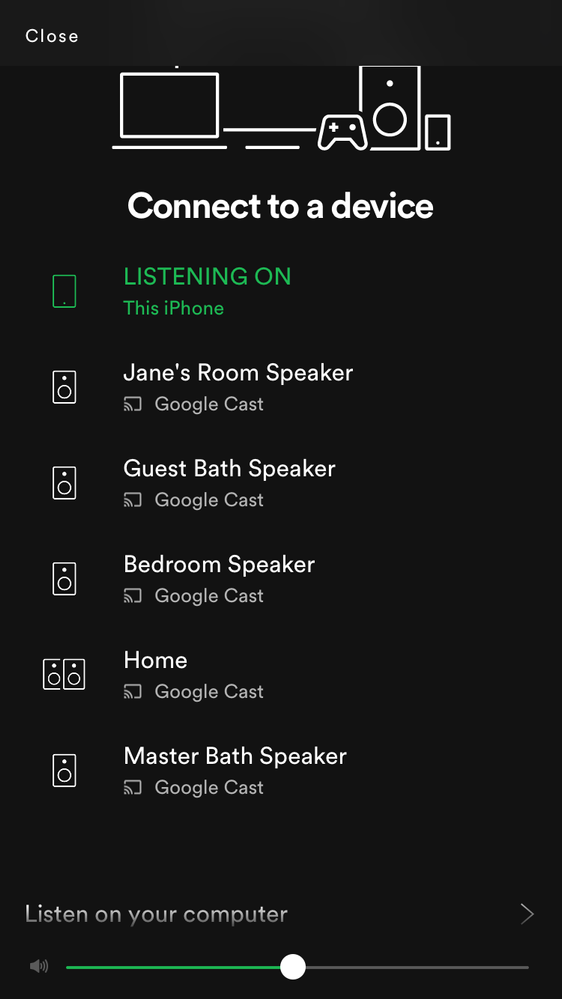 Same problem, started about a month ago

Spoke to Google about it, but it seems to be a Spotify issue.

Has anyone tried any other apps/solutions to isulate the problem?

I have the same problem 8 devices and 3 groups, and only 5 shows up in Spotify.

There are no problems in Plex app or in tunein radio app... so it is definitely a Spotify app problem on Apple devices

I'm glad that it's not just me experiencing it. I'm wondering what it'll take for the powers-that-be to look into it ASAP?!

Surely it's not a huge task to tick off the list.
Any other apps you're using (apart from Plex) that you're using/testing?

Same problem, 5 Chromecast entries and in my case some additional Samsung wireless speakers, just pointing out that it is the Chromecast list that is truncated not the total list of devices. Removed all groups but one since i have four chromecasts as a workaround (:

So, effectively you're unable to get your Chromecast Audio and other audio devices into a group?

I have been trying to find a way to contact Spotify to advise them of this issue. There doesn't seem to be a way to do so though even though I'm on a Premium service.

The posts that I have made on this BUG have had over 840 views without ONE solitary comment from Spotify. No acknowledgement of the bug. No suggestion whether to try something different. No prompt to have the issue escelated. Nothing! Zero!

Didn't see this before, but I also have this problem as described in another thread (Why can't I insert a link to this thread? Seriously?!). It appears that one chromecast goes missing for each cast group.

For me, this happens in the spotify app on iOS. Google Play Music and Pocket Casts on the other hand work fine.

I contacted Spotify via twitter and got into contact with "/FJ". Will report back, if/when we make progress.