I’ve been using Spotify since the time it was invite only, around 2008. I have a ton of playlists and my main list is nearly 5000 tracks, which I’ve been adding songs to since I first got Spotify. The playlist is literally over a decade old. And ever since the first commercial, I’ve been paying for Premium.

- After the latest update, I’m seriously considering walking away from Spotify. It’s gonna suck to begin with, but you know what sucks even more? THE LATEST UPDATE!

I’m beyond anger, like...WHY would you remove “Recently played” COMPLETELTY?! AND AS IF THAT WASNT ENOUGH - I have over 70 playlists, all titled a certain way, for the only purpose of sorting them alphabetically, so that every single one of them is in the RIGHT ORDER. Now it’s not sorted by the name of the playlists, artists, date, NOTHING - it’s all just a big **bleep**ing mess. WITH MY FAVORITE PLAYLISTS ALL OVER THE FUXKING**bleep**. Needle in a haystack, to put it simply.

Mark my words, undo it, or at least make it an option, or I WILL leave this sinking ship within a couple of weeks. And you better understand I’m not the only one either.

I’m all for **bleep** up and trying out new stuff and **bleep**, but you just made my life harder with this update, and consideringen the amount of time I use Spotify - that’s even an understatement.

Im **bleep**ing furious; if my post didn’t make that clear

Thanks for posting about this and welcome to the Community!

We really appreciate your feedback about the new look. No worries, we'll be happy to help you 🙂

I have a ton of playlists and my main list is nearly 5000 tracks, which I’ve been adding songs to since I first got Spotify. The playlist is literally over a decade old. And ever since the first commercial, I’ve been paying for Premium.

Your saved songs should now appear in a playlist called Liked Songs at the top of the Playlists section for fast access. It should have a purple background with a white heart as the playlist's picture.

I’m beyond anger, like...WHY would you remove “Recently played” COMPLETELTY?!

You can still find your Recently Played songs, albums and playlists! They should appear on Home instead.

AND AS IF THAT WASNT ENOUGH - I have over 70 playlists, all titled a certain way, for the only purpose of sorting them alphabetically, so that every single one of them is in the RIGHT ORDER. Now it’s not sorted by the name of the playlists, artists, date, NOTHING - it’s all just a big **bleep**ing mess.

To sort your playlists alphabetically, all you need to do is follow the steps below:

There's more information on sorting (your playlists, your albums, playlists' content and more) in this Spotify Answer.

You can also find more tips and detailed info on how to use Your Library in this Spotify Answer.

If you'd still like the old look back, we'd recommend adding your +VOTE and feedback in this Community Idea to contribute to the discussion. We're actively bringing feedback from the Ideas Exchange to the right teams on a regular basis, you can find more info here.

Hope this helps clarify things! Don't hesitate to give us a shout if there's anything else we can help with.

KaterinaModerator
Help others find this answer and click "Accept as Solution".
If you appreciate my answer, maybe give me a Like.
"Kindness is the language which the deaf can hear and the blind can see." - Mark Twain
Reply
13 Likes
Highlighted

EXACTLY! I've been using spotify since 2016. This time around I got premium mostly because this update was for free users. I was so happy when I got premium, because the menu was like it was before. The new update I have lots of problems with mostly because it feels so broad. I like for everything to be specific in my menu. Also in the playlist filter "custom" just means recently added. It sucks. The recently played tab is nothing compared to how it used to be, so I feel like you cheated us with that. Also, the made for you section does not contain the honestly cool new feature Your Daily Drive. I really don't feel like scrolling down the homepage to find My Daily Mix, when it had it's own section. The update to online web player was also terrible, so I've been thinking about switching to a different streaming service first on mobile after my premium runs out. And when my premium runs out, I will probably use that streaming service on my computer to replace Spotify Web Player, because there are way too many ads, but that's a different story. The only reason why I would miss Spotify would because it syncs my music with last.fm, and I have personal ties with it, but this update is truly the last straw.

Is there is a way to roll back to a previous UI?

It will be hard to break the habit of using Spotify but with this new UI, it is almost impossible.

That doesn't actually help things, though--the UI is inconsistent and doesn't actually give us the ability to filter out specific songs. If I'm in the mood for Fleetwood Mac, I should be able to solely play their songs that I have liked/downloaded without having to make a completely separate playlist.

What makes this more frustrating is the inconsistency. My version of the app on my iPhone 8, fully updated, shows only the artists I have followed under "Artists". When I tap on an artist, it shows me which songs I've liked from them.

However, when my boyfriend taps on an artist on his iPhone XS, it takes him directly to their artist page, even if he has multiple songs liked. Why is this inconsistent? There's nothing in our settings that would change that.

Spotify keeps changing the UI, and it's proving to be really frustrating. I personally use playlists almost exclusively, but there are days (especially if a new album or tour is coming up) where I want to listen solely to a single artist. Thing is, most people don't like every single song by any given musician, so we should be able to have it display just the songs we've downloaded from them for offline use. The old version of the app allowed this; Apple Music allows it, for instance, as does Amazon Unlimited. It would surprise me if Google Play didn't.

If we tap on an artist, we should have an option to see solely the songs we've saved from them. If that's not feasible, then in our library, make a distinction between the artists' pages and pages for their songs that we've liked. As it stands, the "Liked Songs" playlists lets you sort by artist, but not actually filter. Unless I'm missing something or there's a glitch, there doesn't actually seem to be a setting to only show liked songs by a given artist.

I get that you want to make things more streamlined for users, but this many changes that force ways of listening onto us when we're paying for the service make me want to reconsider my subscription (and I've had it for years!). I'll go like the post you suggested, but I wanted to write out a little more on why these redesigns are so frustrating.

However, I am heavily considering leaving Spotify after the most recent updates. It’s horrible. Why on earth would they organize it this way? And why the he** was it necessary to rename “Songs” to “Liked Songs.” Oh my god, it’s just so so bad. It actually pains me.

I'm on Android but seriously, if this doesn't go back to how it was I'm gonna go somewhere else.

Losing my play all function makes the app useless for me. Playing all 8000 liked songs still leaves me 2000 songs short. I'm not going through each and every missing song on albums to individually add each song. Why take out features? This isn't streamlining unless you have only a specific user in mind.

Tried to sort it by individually adding songs to a queue  but there's no "add all" feature which has been standard in software interface design for as long as I can remember so it took hours... gave up... Then realised it was going to take almost as long to get rid as I had to one by one delete every song I've added.

If I wanted this much work I'd carry an old vinyl player to my back.

please, don’t mind me saying that ‘recently played’ doesn’t work throught home page when Spotify is set to be offline. I often listen to music this way in order to save my mobile datas. Which I think spotify always advertise to buy a premium, to save mobile datas. In my opinion, there should be recently played in ‘your library’. It’s the easiest way to listen to music. 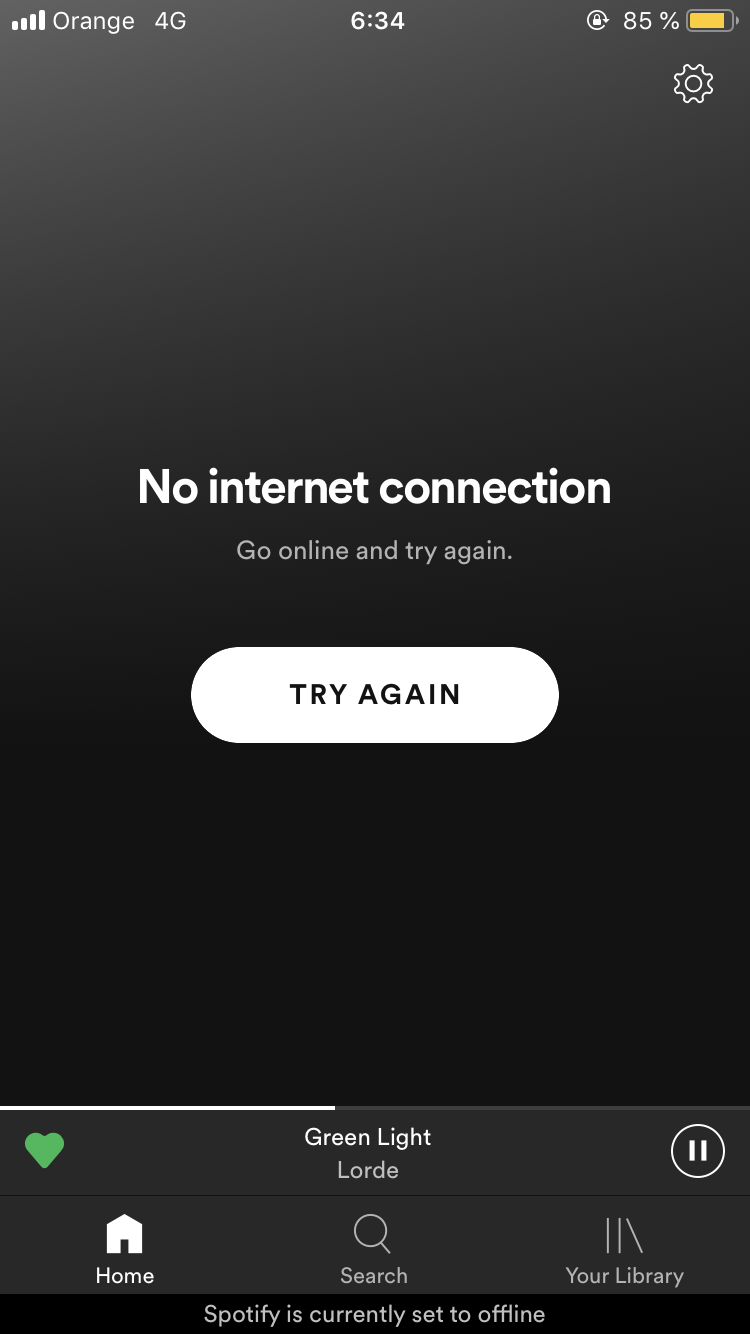 This update ruined the app. All I need is for Spotify to play music, search for artists and sort the artist in my library **bleep**ing alphabetically and the dense **bleep**er who design this update removed one of the most fundamental feature of a music player. Why the **bleep** should I keep paying for premium if this isn't fixed soon? Jesus-**bleep**ing-Christ Spotify, what the **bleep**?