"Coming soon to your iPhone", "Available real soon"? What does that mean? That they annonuce features which aren't available yet? What's the point of that?

Totally agree.  This feature was in the changelog back in July and still the majority of users don't have it.

If you don't want to disappoint people, don't tell them about it.  I was looking forward to being able to finally see the queue and here we are almost 3 months later...

I highly suggest stop pre-announcing features.  It is basically "Look!  The app can do this now, but you can't have it till we say you can have it".

I am having issue playing from my synced offline playlist. Many tracks, while it clearly shows that they are all synced, simply do not play. This has only been an issue since I bought the 5s and started using iOS 7.

Agree with the other posts.  Usually I like knowing what's coming up, but in Spotify's case it seems to take a ridiculously long time to roll out, so I'd rather just not know.  And especially not get app updates saying they have new features when I can't even use them.  Still waiting on the collections feature announced almost a year ago!

I am considering cancelling my Spotify premium membership for the following reasons.

1. The moment your membership expires, your downloaded songs used for offline mode have to be redownloaded. Spotify needs to find a way to keep songs downloaded just block them from being used when memembersship expires so when people renew they don't have to redownload 100s of songs all over again.

2. They refuse to listen to their users. Almost every Spotify user wants Spotify to allow them to delete radio stations like you can in Pandora and Slacker, yet Spotify refuses to give their users that option.

3. Spotify is slow to release their apps/software optimized for the newest operating system out. Spotify for iOS still looks like crap on iOS 7. Not only that, Spotify running on Windows 8 still crashes constantly.

I'm considering moving to Rdio they seem to care more about their users than Spotify does. Yes they cost $5 more but you can at least do in-app purchases through them.

Just to chime in with some thoughts/facts:

1. That is unfortunately down to the licensing agreements Spotify have with record labels. As soon as your premium expires, you no longer have permission to store that offline content in line with the agreements Spotify have - hence why it is removed immediately. It is also removed immediately to prevent people getting around the 3 device limit rule by constantly just redownloading tracks on devices (which would be instantaneous if they where stored) hence that limit would be unenforcable.

2. I don't think that is a fair comment. Sure here on the community it is a pretty large requested feature, but I sincerely doubt the majority of the Spotify userbase even use the radio function never mind want to have a delete option.

3. Can't argue with you there, a redesign is on the way apparently though!

Rdio has no problem with the number of devices being limited. Spotify should just remove it. No to mention that they should add the same sort of remote functionality that Rdio has.

Collections were announced over a year ago, and they Never delivered.  Now they announce that a new and improved way of finding music on iOS, give me a break.  MOG rolled out the same features years ago.  Why has it take Spotify (a much larger company) years to bring these needed features to the market?  We still can't delete downloaded albums / tracks and recover the space.

I don't really care for the Discover feature at all.  Has anyone also noticed that if you select Follow in the client / app. they don't even display the artists you are currently following.  Do Spotify designers and developers use their own applications?

Yes, the music quality is great and there are many nice features, but these mentioned above are WAY OVERDUE!

Just do it already and STOP the Marketing / PR bull**bleep**!  I don't feel too strongly about this topic....

matsern
Casual Listener
Hi, after upgrading to version 0.7.6.37 of spotify i have lost the possibility to play via airplay. The old "guides" on how to fix this aren't relevant as these are for ios 6 and I am on ios 7. This is for iphone. I have the same problem on my ipad (after upgrading to 0.7.6.37 of spotify) so I think this issue is related to the spotify upgrade as i couldn't use airplay here either (was on ios 6 latest), now updated to ios 7 and problem still there.

This is a spotify issue as my girlfriends ipad (older version of ios 6 not latest and older version of spotify ) works just fine and provides the posibility to play via airplay.

By not being able to play via airplay i mean that the "airplay button" is gone, only repeat and shuffle there no.

Can you please release a bugfix for this problem?
0 Likes

@matsern - Can you see the airplay device on your network from the control centre like described here? 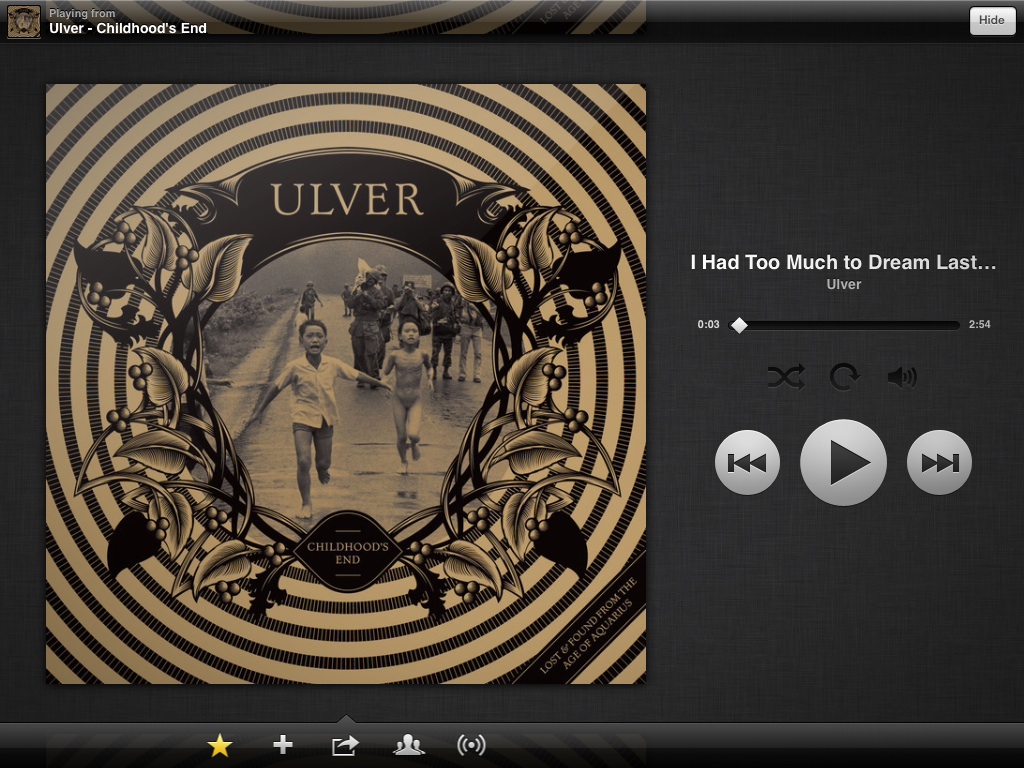 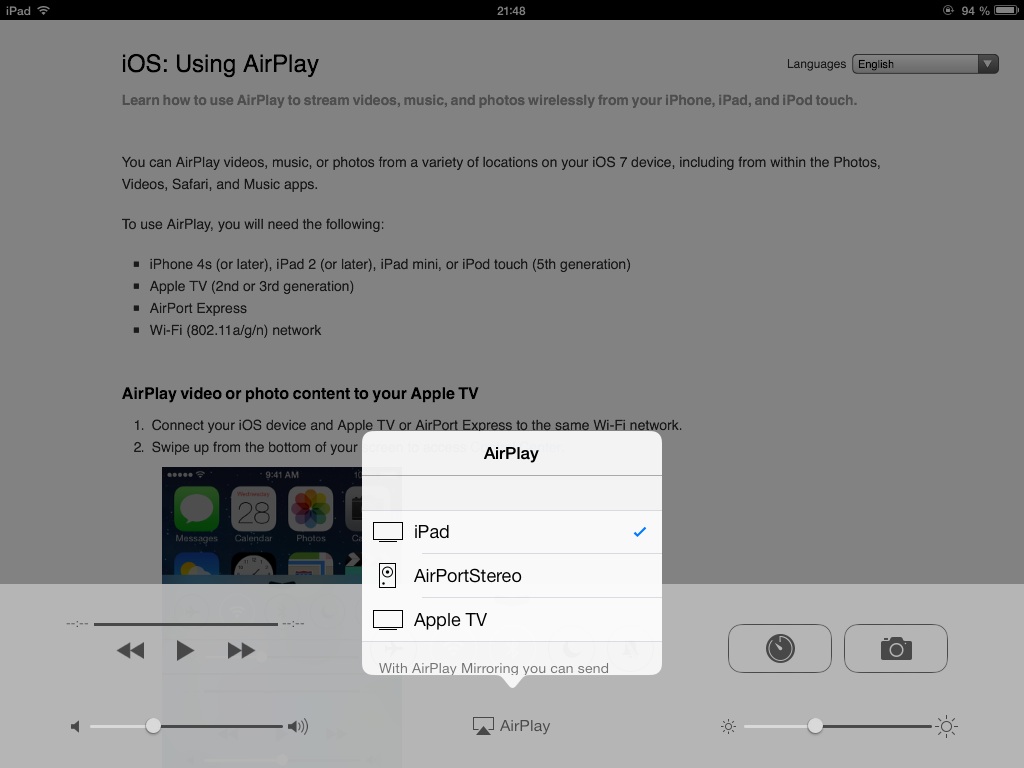 I did get the new Artist view today, but still do not have the new player that has the ability to see the queue.  Once these do rollout finally, they do certainly look nice.

For anyone who has gotten the new player, can you queue up whole albums or just songs?  I listen to music a lot with whole albums and would love to be able to queue up 2 albums for my drive home from work in case the 1 is not enough.

Can anyone provide a screenshot of what the new Now Playing and Queue interface looks like?

I've never even seen a screenshot. It's so confusing to say: "New feature available! **feature not actually available for most people"

Haha, just allow a beta/test mode option that would allow people to opt-in to these features instead of having to guess on if you got the feature and where to find it.

I just noticed the new Related Artist feature along with a much cleaner interface for Artists and Albums (including Artist Bio section).

Very impressed with these new features and think Spotify did a very nice job.  Would love to see Album reviews next which would be the icing on the cake.

Also anxiously waiting for the new queue feature....hopfully just a few days away.

Thanks Spotify, these additions were badly needed!

There arealbum reviews- but I just think their source just doesn't providemany with reviews.  A while back I compared the album reviews in spotify to- not sure if it was rdio or slacker- and they were the same content.  I assume it's provided by Rovi just like the artist biographies.  And the other had just as few reviews. To see the album reviews on the iphone, check out the albums surrealistic pillow and eric clapton unplugged.

What's a Spotify Rock Star, and how do I become one?
0 Likes

I'm running 0.7.6 for the iphone and i can't even get past the log in screen. I'm told that my login password is wrong and then it goes to a connect to facebook window ut from there the little wheel just keeps spinning until my phone goes dark - at least a minute. Please let me know what I can do to fix this.