Why does Shazam have a button to add a song to Spotify List if that option is always greyed  out? I have connected my Spotify account to my Shazam. 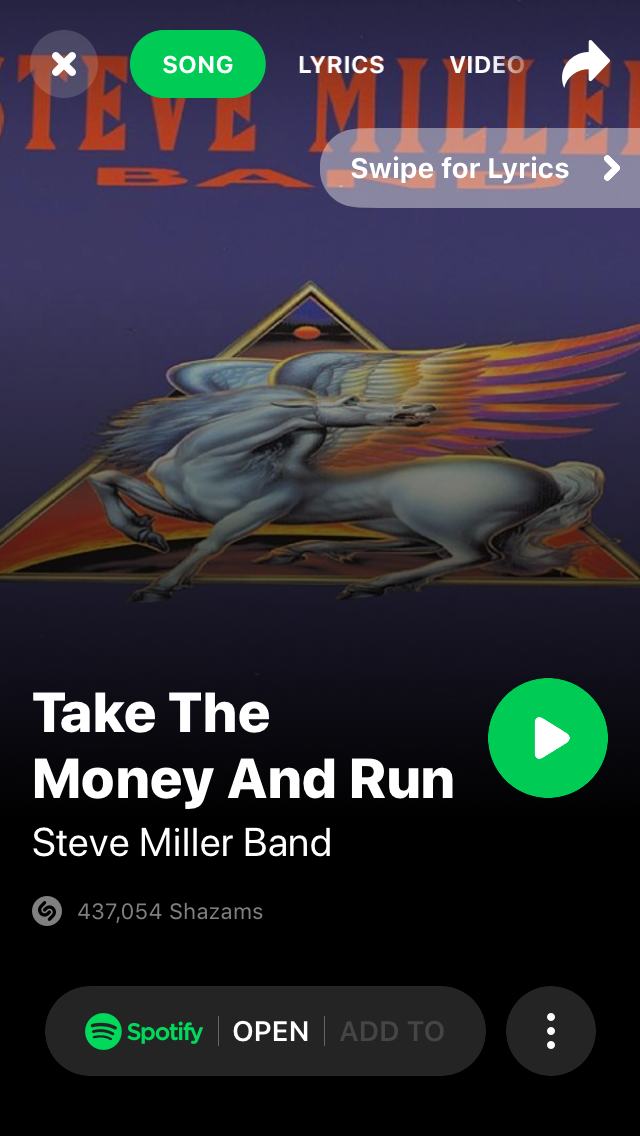 This happened to me too. I live in Indonesia and using Spotify Premium for Android.

Here's one example from Avicii's True album. While a song can be added to Spotify the other can't (greyed out). I mean both songs are playable here and don't greyed out.. 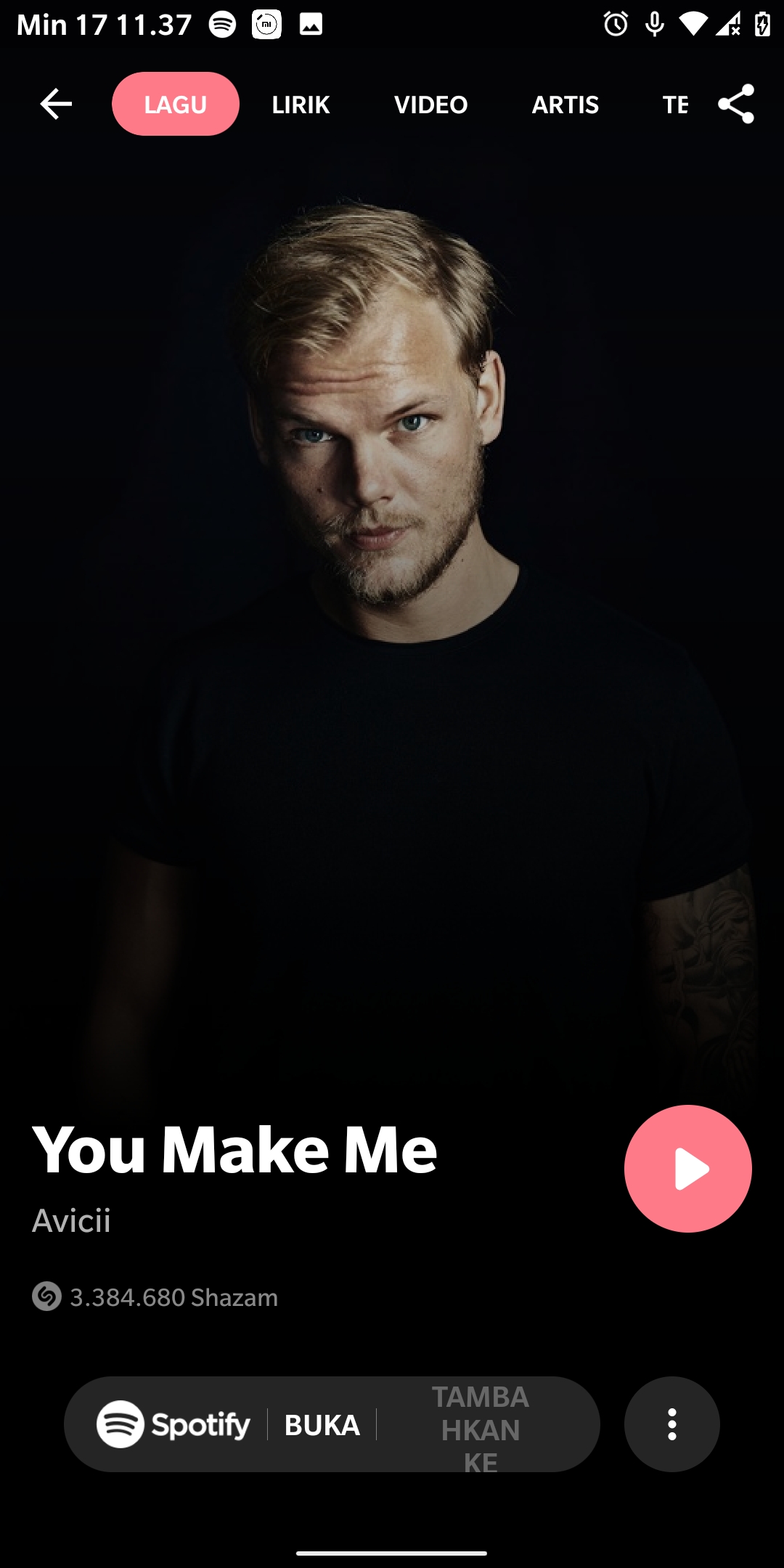 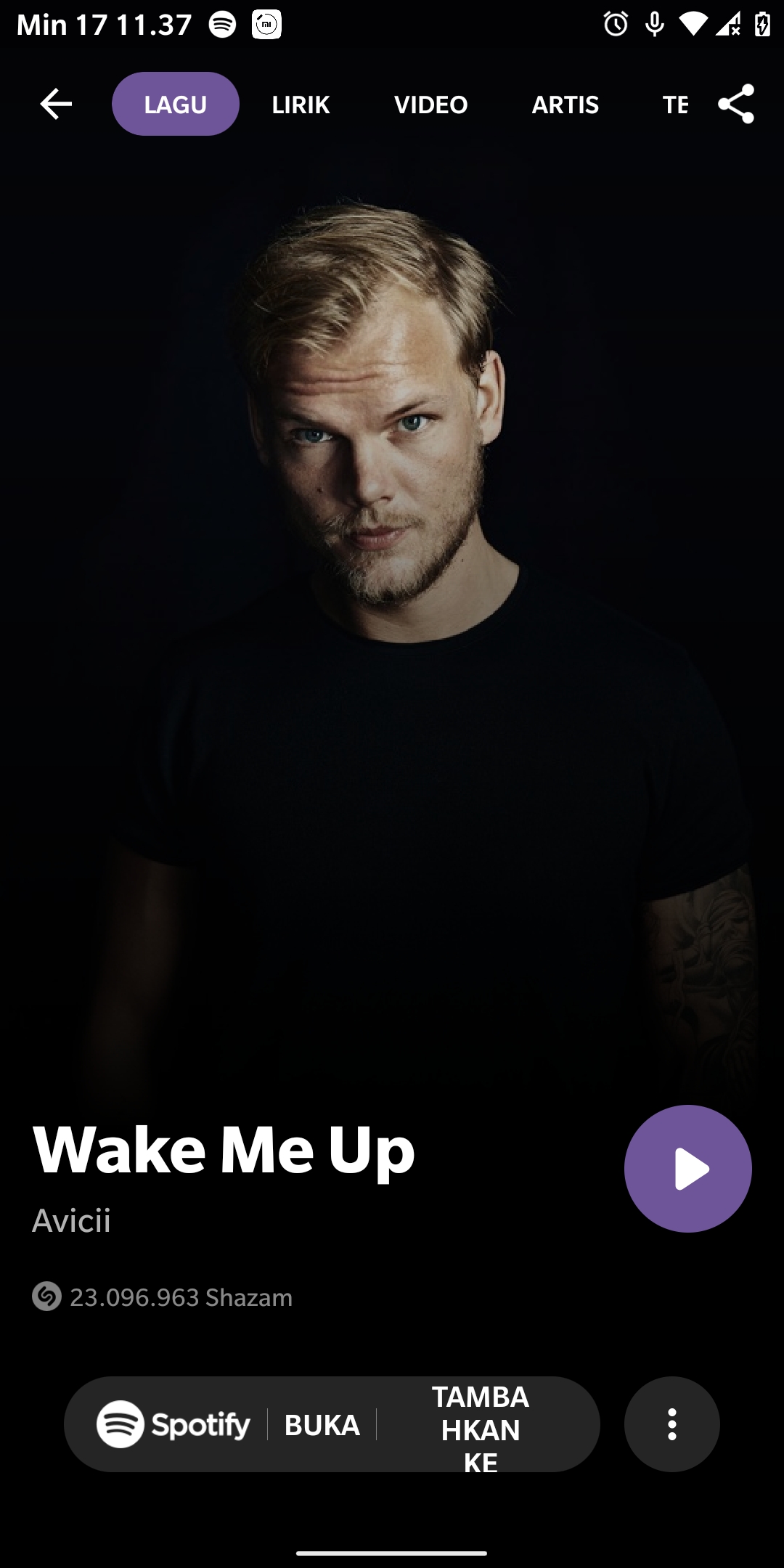 Sorry to hear that. Unfortunately, the reality is that there is no consistency at all to how Shazam and Spotify interact. It's disgusting that two platforms backed by billions of dollars have such inferior technology. Worse, neither seem to care. Two greedy, selfish, dismissive companies that seem to have no idea what the term "customer experience" means.

I removed my access to Shazam on Spotify and turned off the sync on Shazam.
then I went on and re-synced and allowed everything. It didn’t work. So I went back on here 2 hours later for another solution.
Then when I looked back on Spotify to mess around with more settings.. for the first time in 3 years.. I have a “My Shazam” playlist!!!!

so had Spotify playing and went on Shazam a few times to look at settings. Maybe they both just needed to be used at the same time I. Order to fully re-sync??

anyway.. hope this will work for someone else!!! 🙂

That didn't work for me but after a bunch of screwing around with both apps, I figured it out. I disconnected my Shazam account from Spotify (like you did) then deleted both apps from my iPhone. I went into Spotify and created a playlist, "My Shazam Tracks-Archive" then moved all the tracks from "My Shazam Tracks" to it then deleted them from MST. I re-downloaded Spotify and Shazam apps, opened and logged into Spotify then opened Shazam and logged in and went to "Library > Settings" and selected "Connect" next to Spotify. It auto opened my Spotify app and I authorized the connection then was kicked back to My Shazam settings and now Spotify shows as connected. A new selection now shows up, "Auto-add Shazams to Spotify" - I selected it then Shazam'd a few songs and lo & behold they showed up in my "My Shazam Tracks" folder.

What's odd is that some songs that I Shazam have the "Add to" area next to Spotify grayed out while others don't, which is what my original problem was. At least now, all my Shazam'd songs are showing up in Spotify in "My Shazam Tracks." I'm thinking that the problem may have been that I had too many Shazam'd songs in MST playlist in Spotify. When I moved them to MST Archive then deleted them from MST, everything started working again. Hope this helps someone.

I'm glad that worked for you. My problem has never been the My Shazam Playlist. My problem is the "Add to" button being grayed out. I've tried several remedies but none have worked consistently. Spotify and Shazam both need to come correct. This is frustrating and unnecessary. Thanks for the info, though!

scottwwilliamsi
Casual Listener
I got it to work but it seems random. I get the "Add to" button on some but not on others. I also just noticed that if I don't get the "Add to" button, the song doesn't go into "My Shazam Tracks" playlist. But, when the "Add to" doesn't appear, the Spotify button does. If you select the Spotify button it opens Spotify and takes me to the song and I can add it to a Spotify playlist from there. It's a pain, but better than what I had before. Not sure why some songs can be added from Shazam but others can't.
Reply
0 Likes

If it wasn’t for the "Spotify Connect" feature, I would have already switched to Apple Music. The major problem is that it’s not as easy to play it on any device at any time, like it is with Spotify.

Spotify integration seems to have been adopted by almost every platform in existence. That is not the case with Apple Music.

I decided to spend some time on Apple Music to evaluate it more, and it’s a worse user experience than Spotify. Actually, Spotify is FAR superior. Can’t even alphabetize a playlist without using iTunes. What? The best feature they offer is beautiful on-screen lyrics. That’s it. Trainwreck!

Nightflyre9
Music Fan
I guess I spoke too quickly. I just Shazamed two songs and neither of them showed up in My Shazam Tracks. Looks like I’m going to uninstall and reinstall both, as you mentioned, and see what happens. It’s not like I haven’t had to do this before.

As for the intermittent nature of the "Add to" button, I typically experience the same thing. Most of the time it doesn’t show up, and I end up pressing the Spotify button, which, as you said, takes you directly to the song and then you can add it to a playlist from there.

The "Add to" button, however, is much more convenient. If it’s not going to work--or only going to work when it feels like--I would prefer they just remove the functionality all together, so I’m not constantly looking at a grayed-out button and getting more and more annoyed.

I'll post my results. And, again, thanks for the information and help.
Reply
3 Likes

All things I’m shazamimg are going into my new Shazam folder and I can manyally add all songs to any playlist now.
Reply
0 Likes

When you say you can "manually add songs to any playlist," are you saying the "add" button is NOT grayed out, as in the pic I attached? 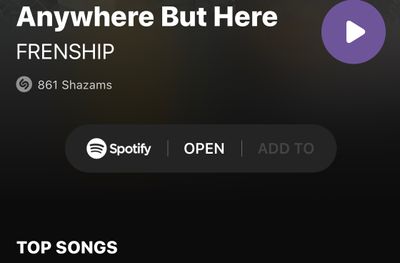 I also noticed My Shazam Playlist was not completely synced to Spotify. I exported a CSV of all of Shazam songs on my browser (it is quite involved). I tried to import all my Shazam songs via a that CSV using Soundiiz. It imported 66 out 77 as it could not find the other 11 automatically. The song tittles or artists were quite difficult with symbols, featuring and remixes. I had to manually search those 11 not found and add them myself.

TLDR: Spotify will not always find the same title, artist as it is shown in Shazam and will not import the song if it can not ensure it is the correct one.

Same issue here.  Shazam/ Spotify worked harmoniously for years but it seems like there's certain songs I'm unable to get from Spotify to a Shazam playlist, manually or automatically.  I've reached out to Spotify and they suggested contacting Shazam since everything looks good on their end.

I've done that, now just waiting to hear back...

This so called answer from Spotify is a typical nonsenses answer. Just paste something from the FAQ maybe even a AI did it and mark it as solved. Shame on you Spotify! On the other hand it might be a problem from Shazam.

So far, no one has provided a solution that is acceptable.

There are only more people with similar bugs.

I solved this by simply logging in to Shazam.

This solution worked for me. The funny thing is I'm usually signed in to Shazam, but I had recently re-installed it and forgotten to sign back in. Thank you! 😉

Unfortunately didn’t help. After logging in to Shazam, I unlinked and rekindled Spotify to no avail. Add to button still greyed out for everything.

My bad. Worked for some songs, not for others. 😕

I think it may be related to the search done for the song ie Shazam can’t find a unique result. I’ve found that if I click the Spotify button next to the ones where the Add To isn’t greyed out, then it opens Spotify directly at the song whereas when I do it when the button is grey then it opens a search screen with many duplicate results.