With the new Spotify update I saw that Siri started supporting Spotify queries. I also saw a shortcut being suggested in the Shortcuts ios app. The shortcut was something like “ play song x”. I don’t see that shortcut or any other spotify shortcuts anymore. Is this a bug?

We just wanted to confirm that Siri Shortcuts is not currently supported by Spotify.

This has been suggested as an idea in the Idea Exchange in the past, however its status is currently set to Not Right Now.

We suggest you keep track of the idea by heading here and clicking on the three-dot menu > Subscribe to get the latest updates on the progress of this idea.

For more info on how your feedback reaches Spotify via the Idea Exchange, make sure to check out this Spotify Answer.

Right now Spotify supports Siri commands, but does not currently support the Shortcuts app for creation of custom shortcuts. That is why Spotify will not show up in the shortcuts app.

You can say things to Siri like "Play (this artist, song, playlist, etc) on Spotify"

MattSudaSpotify Star
Help others find this answer and click "Accept as Solution".
If you appreciate my answer, maybe give me a Like.
Note: I'm not a Spotify employee.
Reply
1 Like

I want to correct my earlier post. It looks like you can now create Spotify shortcuts in the shortcuts app in iOS 13.

This method doesn't really work though. When I end up pressing on the shortcuts Spotify ends up playing the wrong thing even when setup correctly. It will play the right thing the first time the shortcut is used and then it doesn't play the right thing every other time I try to use it. So creating your own Spotify shortcuts in the shortcuts app will give you mixed results, but the method that generally tends to work is just asking Siri to play what you want instead of using the custom shortcuts. Hopefully this can be fixed and improved in the future.

When you create a new shortcut in the shortcuts app and search for Spotify in actions, Spotify will not show up. You need to first talk to Spotify and do a few commands for those to appear as shortcuts in the shortcut app.

To get started: “Hey Siri, play (insert something here) on Spotify” and then Siri should ask you if you would like to allow your data with Spotify if it is not already done and you want to allow it. Or try Settings-> Siri & Search -> Spotify -> wait a second Flip on “Use Ask with Siri”

There is even an option when creating the shortcut to turn off "Show when run" so you can just tap the shortcut and it starts playing in the background, doesn't even need to open up a prompt that it started playing or open the Spotify app and interrupt what you are doing.

MattSudaSpotify Star
Help others find this answer and click "Accept as Solution".
If you appreciate my answer, maybe give me a Like.
Note: I'm not a Spotify employee.
Reply
8 Likes

We just wanted to confirm that Siri Shortcuts is not currently supported by Spotify.

This has been suggested as an idea in the Idea Exchange in the past, however its status is currently set to Not Right Now.

We suggest you keep track of the idea by heading here and clicking on the three-dot menu > Subscribe to get the latest updates on the progress of this idea.

For more info on how your feedback reaches Spotify via the Idea Exchange, make sure to check out this Spotify Answer.

I don't understand why this isn't higher up on the priority list. I am simply trying to create a shortcut that starts Apple CarPlay when I plug it in and then play the "Liked Songs" playlist but no dice because this idea is just being ignored. This paired with no song lyrics ensures I will never go full family subscription. When my student account runs out I'm flipping to another service. With all these services being priced the same, a solid customer experience is critical.

Yes I agree, right now this is really getting on my nerves as as soon as I connect to CarPlay it fires off Apple Music and plays the same song again and again. I’ve been a Spotify user for years, this is making me think about switching.

Hi - had any luck with this at all?

sugarpuff257
Newbie
Don't think that works anymore, I've tried several times this week and it hasn't been coming up ever since I used it last. 😞
Reply
1 Like

clcrawford12
Visitor
How many times did you have to do this before it was suggested in Shortcuts? Its not working for me
Reply
0 Likes

I was playing a bit with shortcuts and I had an idea about making an automatization for when I set my alarm off in the morning. it basically tells me the date and weather but i wanted it to play me music after that. bc i use spotify this was obviously harder to achieve but i realized u can use the "open URL" command from safari and paste the URL from the playlist u wish to include, then in scripting add "play/pause/ in iPhone" and if u play and pause the playlist before going to bed, it will play it in the morning after that command. i realize its a lot but this could also work for car play while spotify works on making their own shortcuts 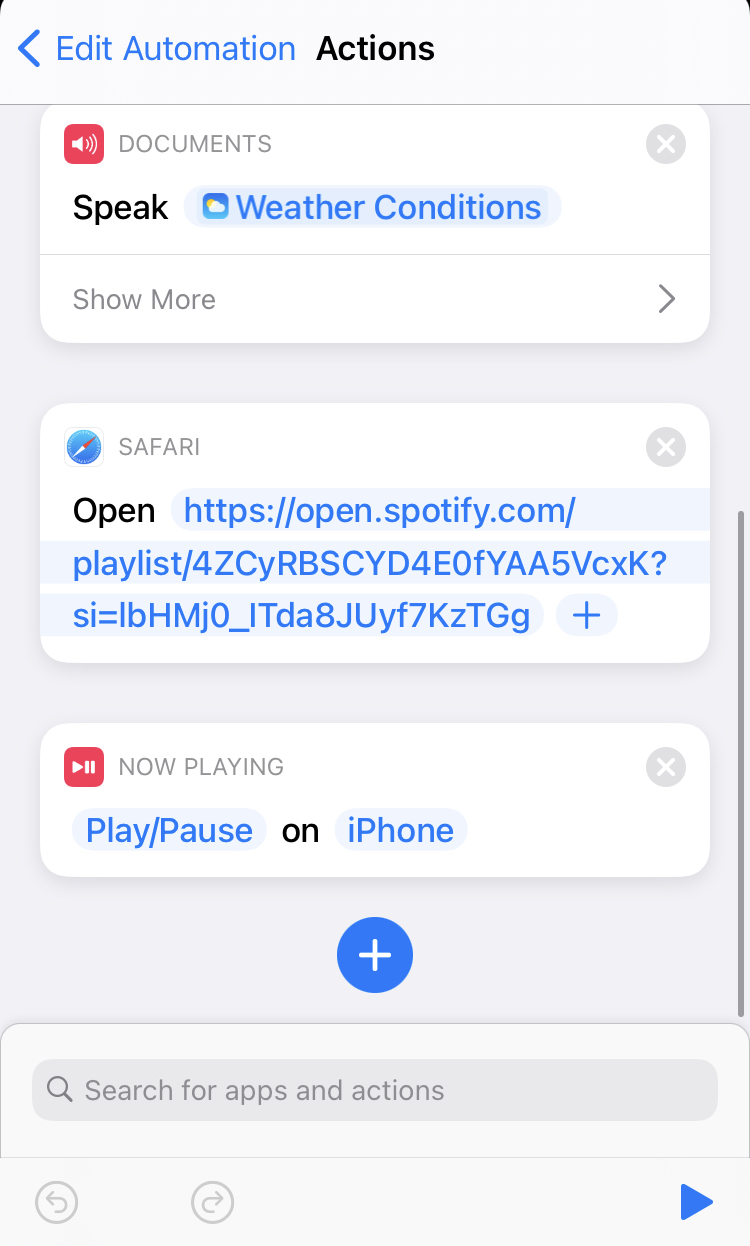 Hey all, I too share your frustration with the lack of support for the Shortcuts app in iOS. However, until Spotify (hopefully soon!) implements this feature, I have a band-aid; it's not a complete fix, but it's very close.

Like many of you, I was trying to create an automation to play a playlist when CarPlay was connected. The closest thing I've found is to choose the "Open URLs" action and paste the link to your Spotify playlist in there. That'll open the playlist for you in the app; all you have to do is click the play button.

Like I said, not a complete solution, but it's one step closer!

I don’t know why, but when it comes to adopting new features, Spotify is terrible.

We’ll probably see Shortcuts integration announced in a couple of years from now. Then, two months after the announcement, we’ll be asking again when it’s coming, and some moderator on this platform will tell us that it’s being rolled out gradually over time. 🤡

Hey folks – I found this tutorial earlier today by someone named Wiehan and it worked pretty swimmingly for me. Might help close the gap on what you're trying to do with Car Play.

Check it out here: https://mountain-road.com/blog/spotify-siri-shortcut

Dude, you are a life saver. Thank you very much