Spotify is testing a new way for you to connect with your music on Desktop. The new desktop experience features an all-new design, streamlined with the Spotify apps on all your devices.

This is a brand-new experience and some parts are still being fine-tuned. Be sure to give feedback with the steps below to let the right folks know what you think could be improved.

The other Rock Stars and I got the chance to test the new desktop experience first and now more users will be able to test it out and give their feedback for the team. If you are a passionate Spotify user and would like to join the Rock Star Program and be part of cool experiences like this, then check out this help article.

How do I know if I’m using the New Desktop Experience?

The new desktop experience is not hard to spot with its new design! Your Library looks like this for example:

Why did the app change?

This test is rolled out to a specific group of users at this moment. It’s not possible to sign up for this right now, but your interest is really appreciated. If you’re interested in testing out new versions of Spotify before everyone else, check this out: https://community.spotify.com/t5/Spotify-Answers/How-do-I-become-a-Spotify-Beta-tester/ta-p/4551518.

If you’re looking for more information about how tests work and about how features are released, take a look here: https://support.spotify.com/article/why-am-i-seeing-different-features-than-my-friends/.

How to give feedback?

This thread is your go-to destination for asking questions, getting help for issues you may have, as well as to share your impressions and feedback on this new desktop experience.

Keep in mind that pictures can say a thousand words, so if you have any screenshots of something you’d like to share of your experience be sure to post them here as well! The right teams at Spotify take their time to read the posts in this thread and use your feedback to fine-tune this new experience for everyone.

HuboRock Star 16
Help others find this answer and click "Accept as Solution".
If you appreciate my answer, maybe give me a Like.
Note: I'm not a Spotify employee.

Hi everyone, we have an announcement in the Blog about the Desktop App. I'm going to lock this thread and move the conversation to there.

Dan here from the Desktop team again.  Desktop 1.1.55 is starting to roll out now and I wanted to let you know what to expect.

As always, please do ensure you’re fully updated and are running the latest version. We again thank you for the feedback provided.

Amjad2172005
Newbie
I really like the new design, however, the option "show desktop overlay when using media keys" isn't there. I would really appreciate it if you could bring this options back.
4 Likes
Solution!

Hi everyone, we have an announcement in the Blog about the Desktop App. I'm going to lock this thread and move the conversation to there.

Probably already requested, but whatever:

Please bring back the Fullscreen button or add another method for displaying the current track's album cover in a big and nice way.

Bring back the ability to go to the artist page and see all songs. It is a feature that was absolutely in the older versions of Spotify.  The screenshot attached to this post is from version 1.1.42.622, released for Macs on Oct 1, 2020 - you'll see the artist page where the songs within each album are displayed, and you can scroll down to see the entire canon of an artist at the song level. This is what I want back.

In the past moderators respond with the suggestion to submit an idea (which was the response I also received when I posted about this in the new beta here: https://community.spotify.com/t5/Desktop-Windows/New-Desktop-Experience-your-feedback-wanted/m-p/513...

The request to be able to go to the artist page and see all songs is a feature that was absolutely in the older versions of Spotify.  This is not a new idea. This is a critique of the new UI and a repeated post to request the previous version's view. 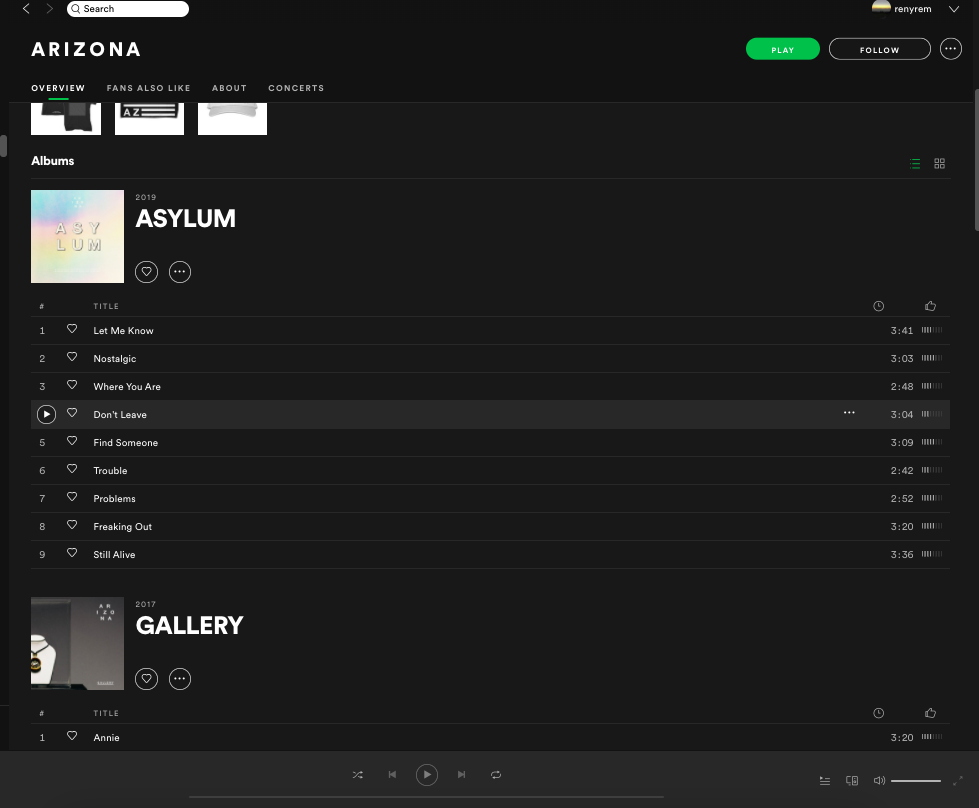 Grunchtherunch
Casual Listener
Please guys this... still being forced to use the new interface... still hate it. very little has changed.

I honestly can't understand why over the years we have gone from iTunes having such a sensible library UI - to this. You have certainly improved the overall aesthetic and feel but at the major expense of functionallity and intuitiveness.

Revert the artist page please. I click on an artist and all i see is a ton of compilations and similar artists!??!

I also don't like the new Spotify interface. Ever since it rolled out in late 2020, it only appeared in my account, but my mom's account has the current (old) interface. 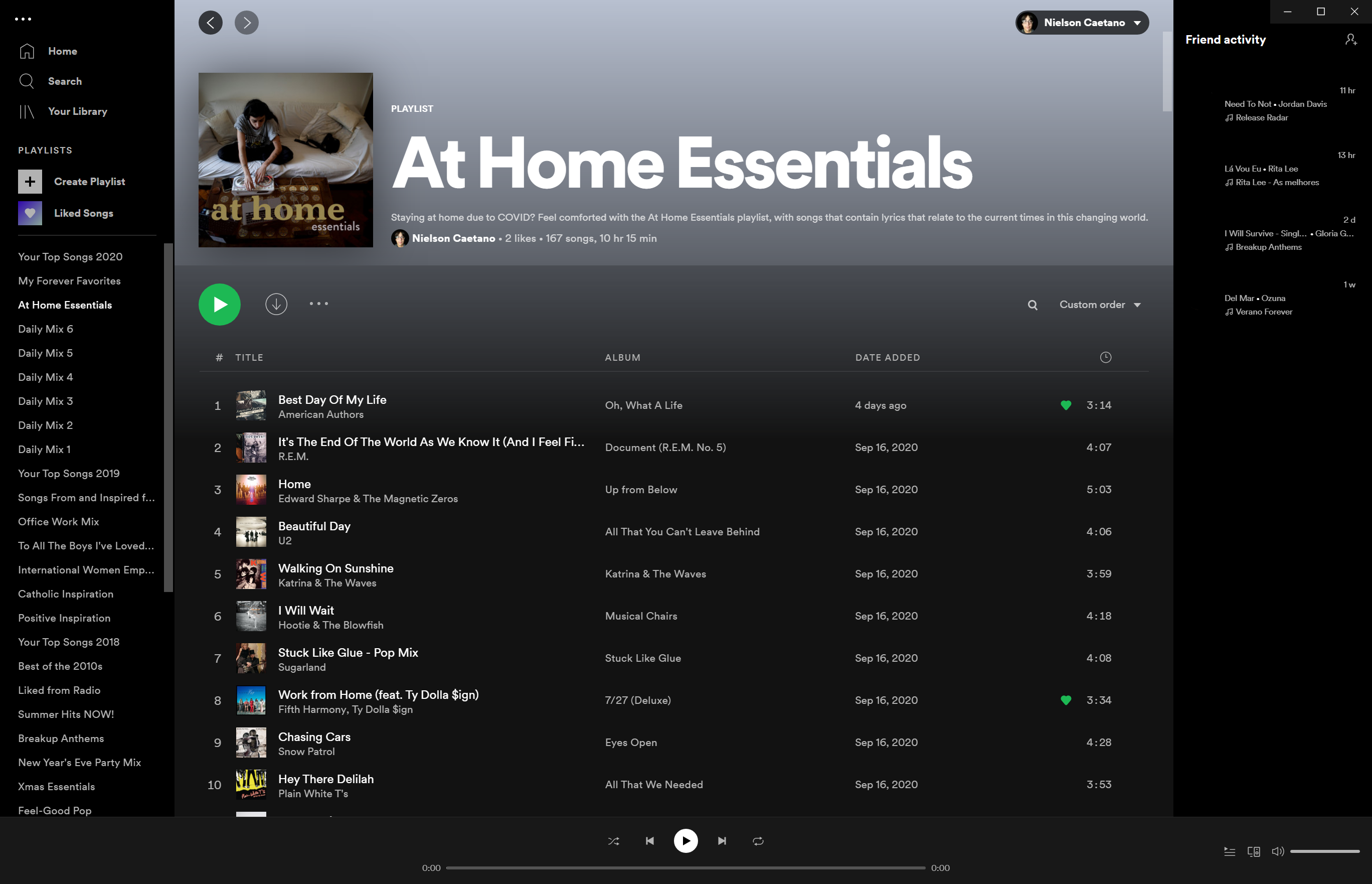 I have few complaints about Recently played page. One is that I have to delete songs from the page one by one which takes time. You should put a button to delete all songs at once.

Another one is that the deleted content from that page keeps coming back after some time. Every time I open Spotify I always see these songs coming back, so I have to delete them again.

Getting there with the new app!!!!

Now, if you just please could remove the warning message that pops up EVERY SINGLE TIME when I want to remove more than one song at a time.

Hello! My Question or Issue

Pop-out audio player overlay has failed pause button, only play and back/fwd icons showing as well. No ability to pause. Not sure if it's just a CSS issue or something more involved.

I mostly just listen to podcasts on Desktop, so my feedback pertains to that area.

Removing the ability to sort podcast episodes was the worst decision made for this update; I've been working my way through a podcast that started in early 2018 (am now on 2020 episodes), and it is incredibly annoying to have to manually scroll all the way to the bottom of the list every time I leave the main podcast page and come back. On top of that, the queue system is absolutely bonkers. Unless I manually add each sequential episode to the queue, the episodes play completely out of order, and Spotify automatically plays episodes I've already listened to. This is annoying on its own for someone like me, who likes to listen to a new podcast from the very beginning and go in order, but that annoyance is amplified by the fact that the majority of the episodes in this particular podcast are 2+ parts. I don't know who thought it would be a good idea to automatically shuffle podcasts and not be able to sort them.

It also may be worth looking into a separate queue between Desktop and Mobile, since I am more prone to listen to music on mobile and don't want my songs interrupted by the next podcast episode I put in my queue while I was at work.

If it helps you any, a potential work around I've found for playing podcasts is to start listening to something on your desktop, bring up the app on your phone, and then try to start the podcast where you want it and tell it to continue playing on your desktop when it prompts. It will play in the proper order in this fashion (plus you can still sort on mobile).

That's how I worked around the same problem I was having while working my way up through a podcast.
1 Like

I've done that before as a workaround but don't love it since my phone then sometimes decides to take over and play the audio itself, so my desktop audio suddenly stops. The ideal solution is that Spotify make sense, but I won't hold my breath on that one.

Oh, that sucks! I've never had my phone do that to me. And, yeah, the ideal solution is for Spotify to fix it but *shrug* we'll see if that happens.
5 Likes

Please add the option to copy playlist URI again with the new UI.

Apparently it's possible to access the copy URI (for playlists/tracks) while holding the Ctrl or Alt key (which I discovered by accident...) while the "share" menu is open.

I guess my new request would be to document/make it clear that it's possible to access URI copying by holding Ctrl/Alt with the share menu is open.

I wanna see ALL albums with ALL tracks listed under them, not this terrible icon view.

I was very much enjoying the new desktop experience although it has been reverted back suddenly to the old experience? Is there any way to opt back into the new experience?

I tried making a new thread although it won't allow me 😕

Based on this desktop app (1.1.54.592), I can't imagine paying for Spotify Premium if I will ever listen on my Mac. I just gave it a try with my free account. The controls are not native and the UI is very not good. I think a WKWebView might be a bit more performant and waste less RAM, however it won't solve the UX - it just does not feel like a Mac app because it's not a Mac app. It's not a Windows app either. There's all kinds of idiosyncrasies. Basically no UI paradigm or control operates exactly the way a real Mac app would. Too many to even try to list, it's stuff like:

I could go on for hours - this is basically a web app mimicking a native app on every platform it runs on. I understand that for Spotify, this gives them a single code base and a consistent user experience across all supported platforms. But for users, it's a lazy move that is not consistent with the operating system and app ecosystem. It's consistently mediocre and out of place.

it is no bueno at all for battery life and energy usage. It's very slow and uses a lot of RAM, especially on my M1 device. You can literally see the content in the window redraw much slower than I can resize it. On M1 devices it certainly will be quicker once it is updated to a universal binary for Apple Silicon, but presumably the embedded chromium framework alone is going to double in size another couple hundred MB. That's going to suck.

Please - use UIKit or SwiftUI. Failing that, consider basing the Mac version on the iOS version using Catalyst. It will probably be closer to native feeling.

It's not nice that Spotify Desktop sets itself up to launch automatically on login, hidden by default, without asking first. Then, the option to disable that is behind a scary "advanced settings" button. I suspect this is a lame solution to make it so Spotify seems to launch faster. This is the kind of thing that makes a person wish an app were distributed on the Mac App Store where app review could simply tell a developer "you can't do that".

first screenshot: Spotify is simply playing music and the window is not in the foreground - it's basically idle. Second screenshot, simply moving the mouse around over the window and clicking on one thing.

Last screenshot: memory usage after just a minute or two.

Indeed memory is a big  issue. For me It takes up to 5 minutes sometimes even more  to load the completeUIi.The good thing i can play it even before i see the complete UI.