So I'm listening to a Radio, a song comes up that I want to add to a playlist, I click on teh album art and select add to playlist select the playlist then BAM music stops, dissapears. I'm rocking a W7 with plenty of memory (8core) NO reason for it to crash.

If you can help it would be appreciated cause I'm getting angry.

I've had the same issue since yesterday. Can't add a song without crasching and the same happens when I want to delete a track from the playlist.

Quick update, if any of you could post some crash logs for us it'd be a big help.

If you're on Mac, open Terminal and copy this in and hit Enter: /Applications/Spotify.app/Contents/MacOS/Spotify

crjstl
Casual Listener
I followed the Windows guide for Vista precisely but didn't find any errors in the last few days with a source named "Application." But it did crash on me twice while adding songs to a playlist.
1 Like

Hi, I'm having the same issue here and it's annoying, the web player works but I mean, I'm not paying to get this....

Hello, I am also having the exact same issue. Started yesterday or so, crashes almost everytime i either add a song or remove a song from a playlist.

EDIT : I've tried to check the even viewer for a crash msg but i can't find anything related to spotify in there.

Sounds like it is happening to everyone regardless of OS though... so sounds like you released busted code. Definitely not a random issue.

I'm also experiencing this issue. Reinstalling/clearing cache didn't work for me, either. I also will crash ocassionally when searching for a song and adding a track to a playlist directly from the search results. I crash more often deleting tracks, however. I'm on Windows 7 x64, and this problem is consistant enough that it's extremely frustrating.

My boyfriend and I are having same issue. Knocks you off when you add song to playlist. Started 9/12/13 and still happening. When you get back on Spotify it paused the song where it kicked off and did not add to playlist.

I think I just generated the log file you want on my mac, but it seems to be encrypted. Unless I know what's leaving my computer in the report, i'm not comfortable sharing that file.

Meredith, I'm on a Mac and tried running Spotify through Terminal  but nothing was logged in the terminal to copy.. Can a log of the crash be found in Console somewhere?

Hi, I'm having the same issue on both Windows 7 Pro 64-bit and Mac OS X (latest version). Adding any track from to a playlist after listening for a few minutes immediately closes the entire program. Deleting a track after listening for a few mintues also causes the same behavior. I checked this forum http://www.cyberlink.com/support/faq-content.do?id=10449 and followed the directions for Windows 7. But there are no "application errors" from Spotify. I will check on my macbook pro when I get home.

To clarify from my first post, this doesn't only happen from the radio, this happens from a simple search as well.

As several other people have mentioned, even checking the event list as soon as the crash occurs, there is nothing flagged as an application error from any program. In fact, searching for 'Spotify' as a string in the entire list of events showed only one application error dated August 8th (If I recall correctly, the problem wasnt occuring then, though it may have been, and has certainly happened over 50 times since then) and the location of the error log suggested in the event log doesn't exist in the folder specified (probably removed by CCleaner).

So it seems like Windows Error Reporting isn't identifying the crash as an application error. This is not surprising at all, as I'm sure everyone else will confirm but hasn't specifically mentioned, this crash doesn't come with any "application has stopped working" or "Want to send this error report" type dialog. Windows doesn't even seem to be aware that its crashed, its just an instant dump of the UI, and the spotify icon remains in the system tray until it it mouseovered, then it vanishes. So whatever is causing it, its just instakilling the Spotify.exe process without notifying the WMI.

Edit: I just deleted a song from my plalist to make it happen again, at 7:48am local time. The most recent entry in event viewer is from 7:43am from the System logs, not application, and is just related to Microsoft Security Essentials. Hope that helps.

I'd love to post an event log to help y'all diagnose this.. It's driving me nuts.. but there's no error event posted to the Windows Applications log when it does this; at least not on my machine.

The application crashes for me when I attempt to delete a song from any playlist. I generally right-click delete. Spotify is happy - and quick - to reboot, but the first song in the queue to play is whatever I attempted to delete.

Problem is NOT happening on my Windows laptop at home.  I wasn't able to find a error log for it for the other PC it was happening on earlier.

Hi, I was able to get the crash to occur while running the verbose method on my Mac via terminal. I tried to uplaod the entire output, but the only supportted attachments are image files, so I'm uploading a screenshot. 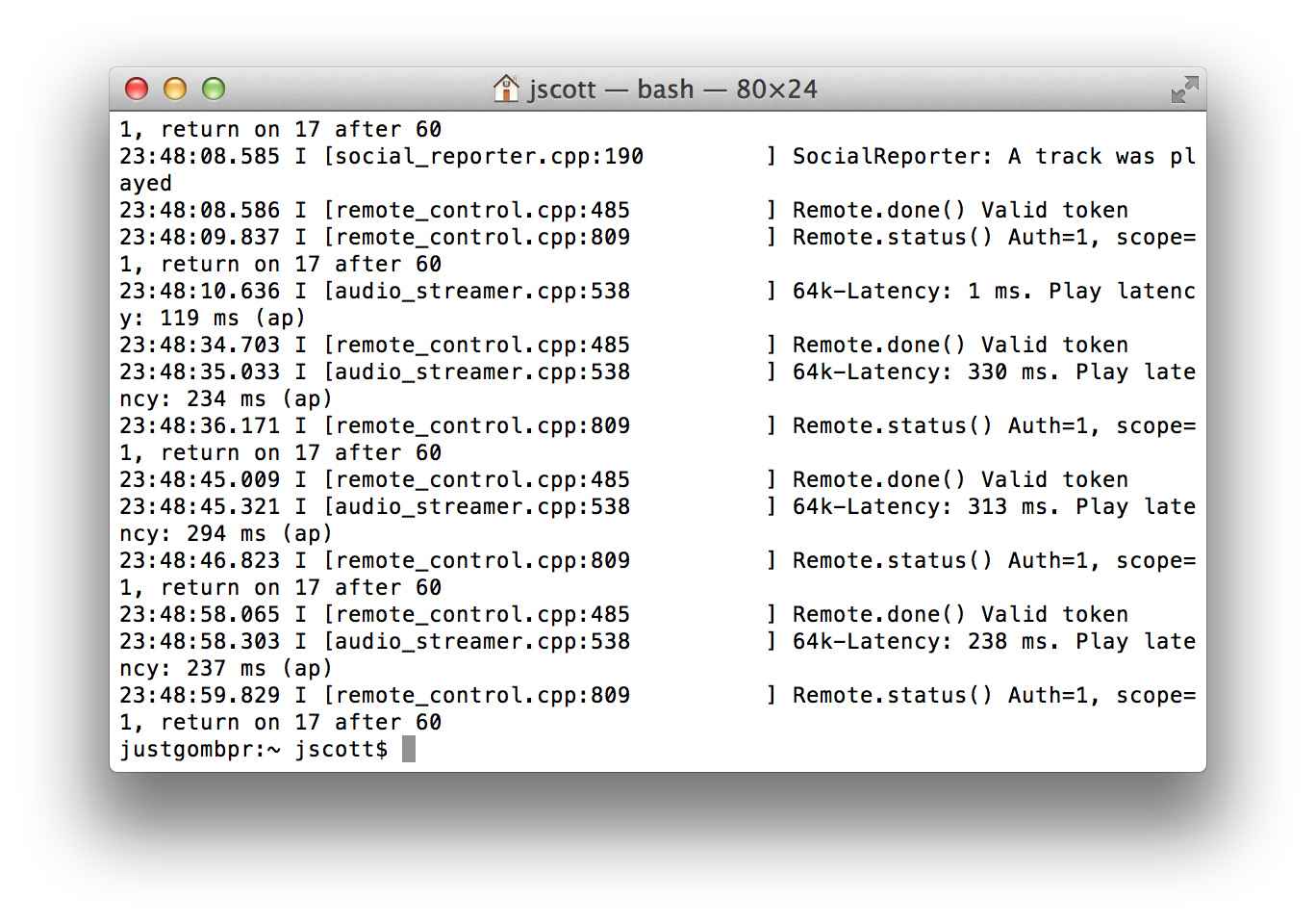 Everytime I add a song to one of my playlist, Spotify closes without any warning. It has done this several times and is super annoying. ;.;

Well this is happening here too, very annoying, so I have to go to the usually inferior iTunes to play only my own music until it is fixed.

I too have been having this issue for the past 2-3days.  It happens when I try to delete songs from a self made playlist- both when I use the delete key or if I right click and delete.  If spotify has just opened, I can delete songs in one go so long as it is prior to me playing any songs.

I tried to look up the event log, but as other users have stated, there is nothing relating to an application error; it simply shuts down immediately, without error messages or not responding messages.

I have been using two separate win7 computers; and has happened for both of them

I drag a song from my computer on to spotify and it just closes. I then start it again, then I am able to add the song. Then if I proceed to open a different window on the computer for a while and then try to add a song again the same thing happens. I am only able to add songs when Spotify has just startet.