I'm the original poster in this thread and unfortunately, I haven't been about to respond in the last 2 weeks.

I can confirm that since the first occurrence of this issue (16 hidden songs included in my DW list) I had 9 last week and 13 today.

Also, I can confirm I haven't hidden any artists, only songs

For my fellow subscribers who are similarly disaffected, I have found some success in exploring music aligned to my tastes by using www.gnoosic.com.  Until Spotify can address this annoyance, I will continue to make use of this site.  However it would be so much easier if Spotify did the discovery effectively.

nighthawk989
Roadie
Just looking now into my new DW, it looks like there is a lot of repetitions, but maybe better? Don't know, will report later the datas. Anyway thanks for the suggestion, but Youtube offers me even 50 new tracks daily, i think it's enough to pass there. I'm very sorry for Spotify, but i don't want to pay for a thing that doesn't work properly.
Reply
0 Likes

nighthawk989
Roadie
Ok, this week 13 tracks already appeared in former DW, so this time i got 17 new tracks, better than other times (six and twelve about). This time no cover bands at least, the number is raising, but still nothing special. It's so hard to return to 30/30 unheard tracks?
Reply
0 Likes

We hear you and we completely understand the situation for you currently is less than ideal.

Music discovery and recommendations are a top priority for us and we're doing our best to improve on those with the resources we have. For now, the suggestion would be to try and listen to some new artists you might have already discovered and tracks related to them, including using the Like Song feature, to fuel what Discover Weekly can work with.

We hope your experience will get better with time as we keep tweaking this.

Thank you for your constructive feedback!

nighthawk989
Roadie
Well, i keep everyday on listening to new songs and artists, i dunno honestly what to do. I just saw some signals of recovery (5 or 6 to 11-12 and this time 17 new tracks against 13 already disliked). I guess for now i will wait one more week, i'm sure this can be fixed, especially for those who are paying every months.
Reply
0 Likes

This week my DW contained 3 songs I've previously hidden, and again, several I've heard many many times before. I hide songs because i don't want to hear that song or really any song related to it, so I hide them hoping to influence my auto playlists away from songs related to it. According to your answer, it sounds like that should be helping, not hurting. As i mentioned, i only have ONE artist hidden, and it actually shows that I've hidden NO songs (see screenshot). As far as I can tell, I can't hide songs altogether anyway, only in specific playlists. I would estimate i've hidden maybe 50-100 songs across all my autogenerated playlists. All last week I only listened to my own or others playlists, nothing autogenerated. It did not seem to influence this week's DW at all.

It used to be (maybe 2 or 3 years ago) that every week my DW was a totally different flavor, and all the songs were from artists i'd never heard of, and it was all new and interesting. Now it's basically the exact same flavor every week despite the fact that i listen to a wide range of genres and styles throughout the week. I do use the 'like song' feature a lot but it doesn't seem to influence anything related to DW (at least not anymore). It's like it's stuck in a rut recycling the same type of stuff every week and now unbelievably, songs I've already hidden.

Like I said, with tens of millions of songs and tens of thousands of artists on spotify, it should NOT be hard to generate a playlist that is genuinely new to me.

is there some way to 'reset' DW? If I can't do some sort of reset, please fix the algorithms. I'd really like to be able to use it again. 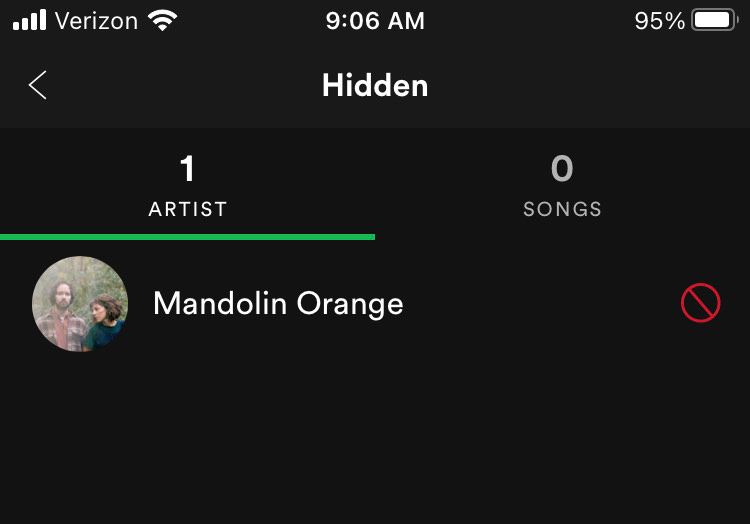 This week improvements seems to happen, even if i still got 7 tracks already disliked. This time so is 23 new tracks over 30, better than 6, 12 and 17 from last weeks. Seems somehow encouraging, hope next week we will be even more close if not full 30/30 as usually... i will wait thanks to that signs of improvement.

Thanks for your update, I am pleased it's improving for you.  However it was a new record for me, there were 17 hidden songs on my DW list.

This problem has persisted for 4 weeks now and Spotify, if you are tuning in, it is beyond a joke.

Please Spotify, fix the problem.  Or worse case, mask the problem.  Programmatically, the last check before including on the list should be whether I have hidden the song.  If I have, ditch it, and suggest another song that is not hidden...keep doing this until you have 30 non-hidden songs.  It is excruciatingly simple.

Man, that's not good at all. It's ridicolous, just like the shuffle algorythm totally broken (for me since september 2020). I "think" (because i'm not really sure what will happen next week, maybe i'll have so much disliked tracks like you again) i solved by tagging the whole artist/band as unliked or to save a song as liked even though is nothing special... but it's just my guess, next week we'll see if i can have still 23 or better close to 30 new tracks or i will see again a lot of hidden tracks...

No improvements for me this week, although I'm not getting as many hidden songs as others. This week I had 3 already hidden, and 16 tracks that have already streamed multiple times - already very familiar with them. Last week I made a point to listen to stuff that sounds totally different from the rut my DW seems to be stuck in. I also used the Like Song feature on a bunch of new and different songs. It didn't seem to influence it at all, it's just more of the same every week. I agree with rodstar that it must be simple to programmatically check whether i have hidden a song before including it. IMO it should also be simple to check whether I have streamed that song before. If i have, don't include it. I don't want songs I have heard over and over already in my "discovery" playlist. I really hope that this is being fixed.