Ive enabled local files on spotify on my computer. Ive added them to a playlist. Im on the same local internet.I have also tried connecting to my phones hotspot. i can play the song on my computer and it will play on my iPhone. However none of the songs will show up in the playlist on my phone. The farthest Ive gotten is getting this message. The issue is there's no offline sync anywhere in my spotifuggle app on my computer both from the Microsoft store or downloaded from spotifys website. 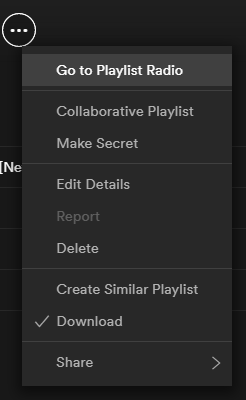 My local files say that they are downloaded on my iphone, but whenever i try to play them they just stop whatever music I had playing. Do I have to delete and re-add all of my local files? I've tried redownloading them for offline use on my phone but to no avail. What do I have to do to fix the issue?

I have the same problem. Just got the new 11 yesterday and my local files won't play any more :C

They don't show because your have hide unplayable songs enabled in your iOS app settings.

I have those files enabled in settings thats how im getting the message to appear. Step 3 is nowhere to be found on either device

This solution worked for me.

go to the playlist where your Local files are and hit the download.

Lol. I commented yesterday because I was so excited when it showed in my phone and thought to share it.

i’ve been downloading my local files on my phone since yesterday, but still grayed out. its sync on my computer, i tried everything that I can. Followed the instruction/solution that I found on this community but none of it worked.

did it worked for you? Can you play your local files on your phone?

I did all the steps that were mentioned in other posts (same wifi, make a new playlist, download the playlist), but my local files still won’t show up on my iphone. The playlist will be there but the songs won’t show up (not even grayed out).

Do you have Hide unplayable songs enabled in settings?

so the "local files" music isnt downloading from my computer to my phone
ive tried everything from the solution of this thread (https://community.spotify.com/t5/Android/Play-quot-local-files-quot-on-my-mobile-device/m-p/80481?_g...) and everything from the solution of this thread (https://community.spotify.com/t5/iOS-iPhone-iPad/Local-file-appears-but-won-t-download/m-p/1575913) including Jacob's fix, but it just wont work.
im connected to my dads computer through icloud or something, i dont even know, the files he downloads shows up on my computer, and vice versa. could this be helping cause the problem???
the music shows up just fine on my desktop, it just wont appear on my phone at all.

I've uploaded a few songs to my Local playlist on my Desktop app and have added them to a playlist, have tried logging onto the same WIFI on both my phone and Mac and using the hotspot on my iPhone but the uploaded songs don't appear on the playlist on my phone.  Help please!

So close! No worries, we'll keep at it 🙂

If you're still having trouble getting those local files to become playable on your iOS device, could you try a clean reinstall of the app using the relevant steps for your device in this Spotify Answer?

If that doesn't work, could you try the following:

Let us know how you get on! We'll be here in case you need any further help.

If the status is "waiting to download" then it's most likely an issue with your network configuration - your devices can't "see" or communicate with each other.

The most fool proof method that I've found is to create a hotspot connection with your phone and connect your computer to it and then try to sync your local files.

If a song from your local computer files was previously synced to your phone but has either greyed out or disappeared, then this should help you because it worked for me...

In my case, I had previously downloaded the songs to my phone but eventually, when I tapped on the song, it wouldn't play and disappeared or was greyed out from the playlist on my phone.

So what I did to fix it was remove the download from all the playlists on my phone and then redownloaded them while my phone was plugged into my computer. After redownloading, the songs would play.

BTW When you remove the song from your phone it'll look as though it disappeared from the playlist even though it shows up on your computer. So you have to make sure your phone is plugged into your computer when redownloading the song.

This method may work for Andriod users, but I have not tested this.

Having or not having the phone plugged into the computer doesn't matter. The whole communication between the phone and computer takes place over wifi.

xxyums
Casual Listener
It worked! Wow! Finally!! Thanks for your help, Peter! Have a great day!
Reply
0 Likes

ive just upgraded my iPhone from a 6s to 11 pro

i did the set up last night and my Spotify app downloaded fine.

The issue I have is that the local files which played fine on my 6s are not playing on the new phone.

The files are showing in the playlists and look like they are downloaded but don’t play. They also say artist unknown. Do I have to download these local files again onto the new phone or is there an easy workaround?

Regarding the "unknown artist" issue please post in this thread to get the attention of the mods: https://community.spotify.com/t5/iOS-iPhone-iPad/Synced-local-files-show-quot-unknown-artist-quot/m-...

Regarding the first issue, yes, you have to sync them to your phone from a computer again. Support article can be found here: https://support.spotify.com/us/using_spotify/features/listen-to-local-files/

I’ve  just downloaded a new local files playlist from my Mac to my iPhone and downloaded it on there.
It’s not playing on the new phone however even though the playlist is there and each track looks like it’s downloaded.

Thank you so much