What junk this has become! At first I was happy because I had the new version but it still was working, but now it stopped working and I can't preview songs anymore! If Spotify is going to keep taking away features then I am going to take away my away my business and switch to something else!

Macatron
Roadie
I'm going to add my voice to this as well. I discovered this little trick a long while back, and it's been a favorite feature of mine ever since. I used it constantly. When I'm creating a new playlist it makes it SO much easier to try out tracks before adding them in. Now I have to play EVERY track one at a time?!? Seriously?!? Like many others have already stated, this was one of your KEY features that set you apart from YOUR completion. I don't think that removing a feature that is CLEARLY missed by your vast user base is the way to maintain that user base.

While your at it, you might at well remove the three other features that's keeping me using your service: Discover Weekly, Release Radar and being notified of a duplicate track in an existing playlist. If one of those gets axed I'm 100% dropping my Spotify subscription.

fireleader
Newbie
In my opinion this kind of attitude is unacceptable of any company that respects its paying customers. I have a premium subscription and used to love using Spotify both on my phone and my computer. But you seem to just can’t stop removing features that your users love and use daily. First you did it with the lyrics feature on the desktop app. We were promised a better alternative would arrive at some point in the near future, but that never came as we all know. And now, you have the audacity to remove a feature that a great deal of your userbase uses on a daily basis and made Spotify on iOS stand out from the competition? What’s even worse is that we, users, were not provided with a changelog for this new version of the app. Had I known this was about to happen, I never would have updated the app. You know, you should be providing us iOS users with reasons to stick with Spotify, but instead all you’re doing is point out how Apple Music is the better choice for us. After years of using Spotify, I am finally switching to Apple Music. I’ve just had enough of this.
10 Likes

Joankroan
Newbie
Please, re introduce it as fast as possible because it was the best feature to check if an album was good to listen to. Now there will be much less music ill discover
10 Likes

Macatron
Roadie
I decided to formally protest by lowering my review on the AppStore to one star (down from five). I suggest the rest of you do the same. Maybe then they'll see that people ACTUALLY used this feature. 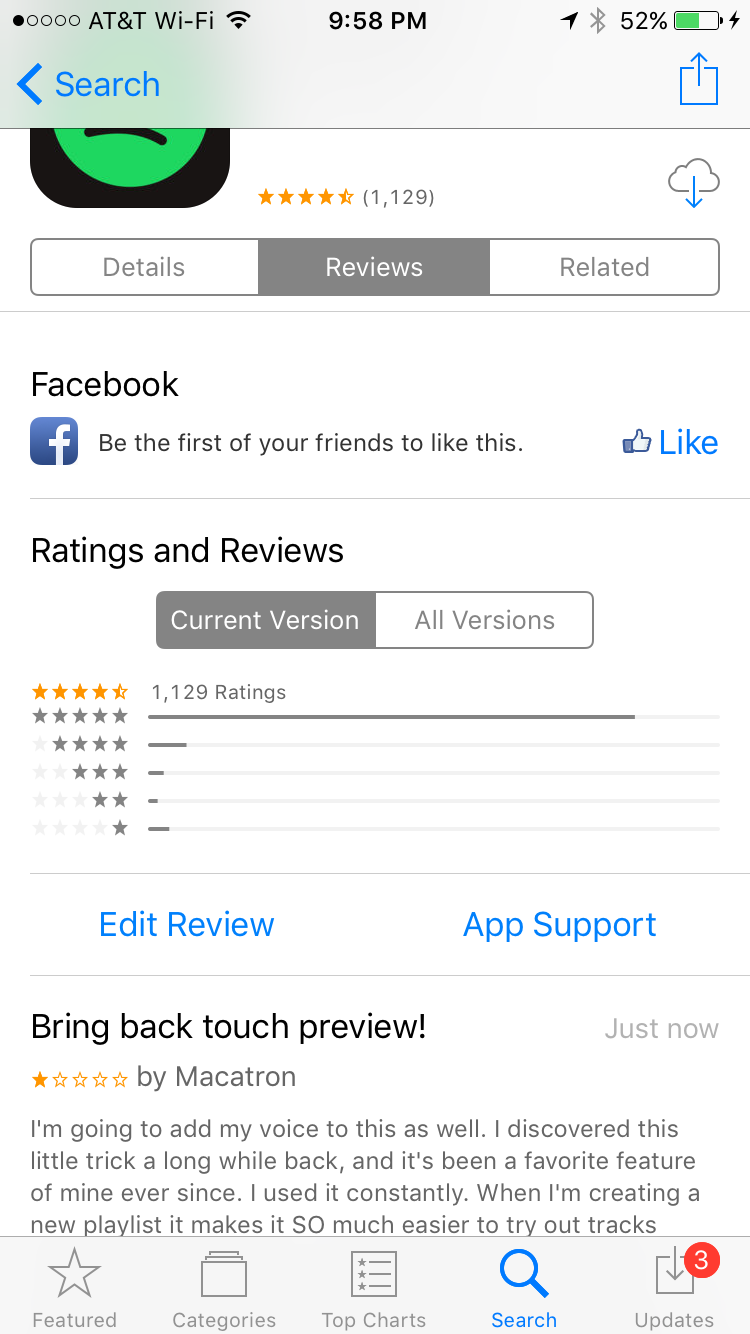 wysasy
Regular
Bring it back!! I used this very frequently, and the app's quality soars downward without this option. I know many people who didn't use this feature simply because they didn't know about it. Make it more widely known! People will use it! I truly wish I knew about this before the app updated, because I most definitely would have stopped it to ensure that I could still use this feature. Please bring it back!!
6 Likes

Jordanh1226-12
Casual Listener
What the F*ck is wrong with y'all. That was the best feature. I'm taking my business to Tidal or Apple Music. Y'all are cancelled.
7 Likes

Basher365
Newbie
You guys are gonna lose a lot of people if you don't add this feature back (not that it's gonna happen ever).
4 Likes

Jordanh1226-12
Casual Listener
If I would have known that y'all wanted to get rid of(dummiest decision ever), I would have never updated. Y'all need to have special event meeting like Apple because this is outrageous. I need to get a whole understanding of the new direction y'all are attempting to go into. Y'all ruined my whole musical experience. I actually hate listening to music right now. Thanks a lot. I thought Trump becoming president was dumb. This is even dumber. Since y'all are done wit touch preview, can Apple Music or Tidal use it now because it was pointless to use in the first place.
3 Likes

How will non premium users sample or find new songs they will have no idea what they are adding to their playlist because they dont have the option to play it on demand or even hear part of the song. Even as a preium user I find it extremely inconvenient to have to play a song from the beginning every time I want to just get a feel for a new song. This will be especially inconvenient when browsing an entire album or playlist. Also Iliked how I could listen to part of a song and it would not disrupt the music I was listening to before i sampled the song. As a user that has been with spotify for several years I am very dissappointed and I hope a similar feature will be put in its place if it is not brought back.