iPhone App: Do not play album in shuffle mode by default.

iPhone App: Do not play album in shuffle mode by default.

In the iPhone app, when you select an album to play, it is played back in shuffle mode by default. This means that if you're not paying attention, you'll inadvertently listen to the tracks of an album order. I don't see anyone good reason why the default should not be to play the songs on an album in the order that the artist intended. This is particularly problematic for albums in which the order is crucial to enjoyment (standup comedy, audiobooks, radio dramas, musicals, concept albums, etc.). Please, out of respect for artists and consideration for listeners, make the default to play albums in their intended sequence.

amperrymd
Casual Listener
I found if you open a song that is playing (touch the banner on the bottom
of the screen) on the bottom left is a little shuffle icon. If it's lit up
you're shuffling. Touch it off and the shuffling stops. For me it seemed to
shut off shuffling as the general default.

Could you please add a "play album in order" button to the album page on iOs? With the new update I have trouble adding the entire album to the beginning of the playback queue.

Just checking in on a very old issue that's been bugging a looot of poeple and I still can't find a solution. Not even a response or comment from Spotify...

It looks very much like this is not actually a mistake or a bug. I'm really starting to think that Spotify has some sort of contractual obligation to push users towards shuffle mode... Sounds stupid, especially when limited to an album, but we've all seen marketing ppl in the music industry come up with a lot more nonsensical and idiotic music consumer limitations before.... Anyway, wish Spotify could just tell ppl what the deal is so we don't keep chasing solutions in vain.

This is so annoying... Waiting for google to have family subscription in Poland and I'm out from Spotify... Hope this will happen soon.

I agree in general with the above comments, I usually prefer to play an album in secuential order, and I had some time wasted on the internet to realize how to disable shuffle mode. Its not as intuitive as something so simple should be.

The shuffle ON/OFF option should be presented at album level, not only song.

For example, as some user suggested, add a PLAY button next to Shuffle when you view an album.

Now generally speaking the Spotify mobile app is not very UI friendly, it has poor usability and thats clear when you compare it with other players.

I hope they improve this aspect in the near future, because premium users -me included- are paying for it.

And BTW the same applies for Android.

pascalb82
Newbie
Too, it is incredible that the button does not work on Androïd system ...
1 Like 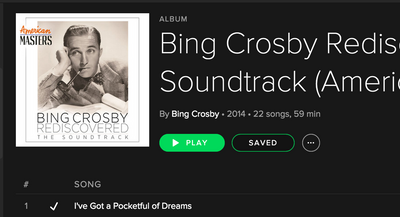 SPOTIFY UI designers.  Just do THIS please in the IOS app.  This guy is TOTALLY and completely correct.  Change it and stop pissing your customers off.

I only ever have 2 desired states with regard to album playback order:

1. I don't care (so I hit shuffle play since it's the one and only 1-tap option to get the music started)

I never actively WANT shuffle....  it would be nice if there were a "Play" button next to the "Shuffle" button.  This is a MAJOR consideration for me in terms of whether I will keep my Premium access beyond the trial end.

I can't get my playlists on my phone to stop shuffling. Ive tried everything. I use it for my yoga classes so it's extremely frustrating to have my songs playing out of order. How do I fix this? I've resorted to using Pandora, which I hate, and need to fix this ASAP!

I also had the problem of not being able to turn off shuffle while playing on my home stero (Yamaha receiver) using Spotify Connect. I knew where to change the setting, but no matter how many times I pushed the shuffle icon, it would not turn to white from green. Finally, I disconnected Connect so that I was playing only through my device (iPad Air), at which time the shuffle button worked as expected. I then reconnected to my Yamaha receiver while shuffle was off and, voila, the playlist now plays in order.

Definitely non-intuitive and, I expect, the failure of the shuffle button to work while using Connect may be a bug with my device and version since some people seem to have gotten it to work.

amperrymd
Casual Listener
I found if you open a song that is playing (touch the banner on the bottom
of the screen) on the bottom left is a little shuffle icon. If it's lit up
you're shuffling. Touch it off and the shuffling stops. For me it seemed to
shut off shuffling as the general default.

I cant believe this was accepted as a solution. This is just a workaroud.

I hope the dev team reads all the comments on this thread because users are still not happy with it.

Likewise - husband just bought a family account so I can have my own login and am already tired of shufffle being turned on by default.  Who EVER wants to shuffle an album?  How is this even an issue?  sort it out please

If you close the app or switch off your phone and the last thing you were playing was a shuffle playlist, when you open it again it will be set on shuffle, no matter what you are playing, albums or playlists.

The fix is to disable shuffle before you check out.

Don't make shuffle the default. Put on a play button.

Haleymarie423
Regular
Same for me and I can't turn it off on my phone. I hate it! Started with the new iOS update a few months back
1 Like

Please add a button to play in order or replace the shuffle play button with a play button. This is such an annoyance in the mobile app. I really miss MOG. The mobile app was so much more intuitive than Spotify. The only reason I'm with Spotify is because MOG sold to Beats and Beats is terrible.

Just want to echo other users bafflement/frustration that the iOS app defaults to shuffle mode, and that there is no basic "Play" button.

I upgraded to premium and downloaded the app a few days ago.  When I tried to play an album, I was a bit puzzled that only icon offered to me was "Shuffle Play."  So i tried to sidestep it by clicking directly on the first track of the album, figuring (logically) that the rest of the tracks would follow in order.  Instead they played in a random jumble.

I finally discovered how to turn off shuffle play, but it was so non-intuitive it required a google search to figure out.  If it requires internet research to do something as basic as play the tracks of an album in order, that is a major fail from a user-interface standpoint.

Agree w/ previous poster re: MOG. Of all the streaming apps, it had the best designed and most intuitive UI, but the Beats remake is a complete disaster...  Which is why I'm back to Spotify.

I agree with all the above posters; I have an iphone 5 and it is annoying to have to turn shuffle off every time I switch to a new album